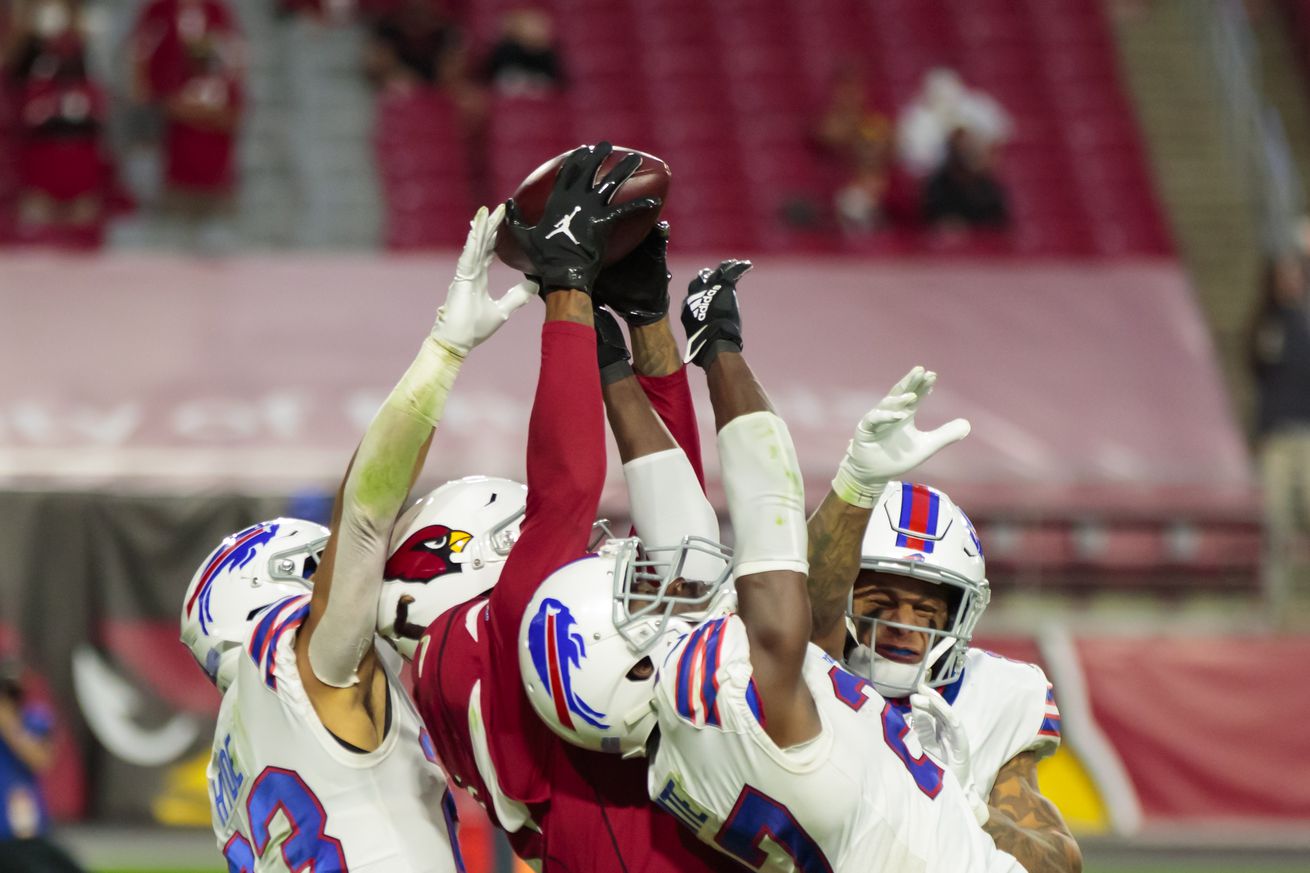 The Bills contained dual-threat quarterback Kyler Murray, but not for long enough

The Arizona Cardinals defeated the Buffalo Bills on Sunday, winning 32-30. If that were the headline and you didn’t watch the game, it’s possible that you’d think that it was a close game where the Bills ultimately came up short. And that would be correct even if you did watch the game. However, as the painful picture that goes with this article shows, the Bills literally came mere inches away from victory

Buffalo led 30-26 with 11 seconds to play. Then, the Cardinals scored on what was just an amazing play from one of the league’s best players. The Bills contained Arizona’s offense for the first half, and they did their job for most of the fourth quarter, as well. The third-quarter blues allowed Arizona back into the game, and ultimately left the Cardinals in Hail Mary range at the end.

Here’s how the players we watched this week performed.

In the first half, the insanely athletic QB was 13-of-19 for 102 yards. He’d taken two sacks, and he’d rushed six times for just 19 yards. Buffalo came out with an excellent game plan to slow Murray and, for 30 minutes, they executed it perfectly. As happens all too often, however, the Bills were unable to maintain that momentum after halftime. In the third quarter alone, Murray was 6-of-8 for 88 yards, adding four rushes for 48 yards and two touchdowns. Before Buffalo could blink, the Cardinals’ halftime adjustments combined with a putrid 12-yard Corey Bojorquez punt and a bad Josh Allen interception had allowed Arizona to tie the game. Murray threw a fluke interception of his own in the fourth quarter, but he ultimately ended the game with a gorgeous 43-yard Hail Mary after breaking contain. Murray finished his day 22-of-32 for 245 yards with one touchdown and one interception.

I’ve said it before, and I’ll say it again: For my money, Hopkins is the best receiver in the NFL. On Sunday, he did what elite wideouts do. Hopkins made a play to win the game, out-jumping Tre’Davious White and Micah Hyde (and surviving a crash with Jordan Poyer, who hit White harder than Hopkins) to secure a victory for the Cardinals. Hopkins and White fought hard with each other all day, but Buffalo didn’t have White exclusively shadow Hopkins. He was prevented from scoring a touchdown in the first half when rookie Dane Jackson broke up a would-be touchdown pass. Hopkins finished his day with a fantastic overall line, catching seven passes for 127 yards and the game-winning touchdown.

The former Bill was ruled out after I filed the story, so he did not have the chance to sack his former teammate on Sunday. He’ll have to wait until February for another opportunity.

The veteran acquitted himself fairly well on Sunday, finishing the game with three tackles, one pass breakup, and an interception. The pick was Josh Allen’s second of the game, and the second where he tried to throw across his body after a designed play-action rollout to his left. Kirkpatrick perfectly undercut Gabriel Davis, the intended target on the throw, in order to make the interception. He did commit one penalty—an illegal use of hands infraction that gave the Bills a first down on their third-quarter touchdown drive—but, overall, Kirkpatrick did a nice job in coverage.

The stud safety led all Arizona players in tackles, totaling nine on the day, in what was another stellar performance. Baker added one pass breakup, and it was a big one: He was able to swat a pass away from Gabriel Davis over the middle on the first play following the two-minute warning in the fourth quarter. That play set up a 3rd-and-5 for Buffalo, which they ultimately converted, but Baker made Buffalo’s job more difficult all day.