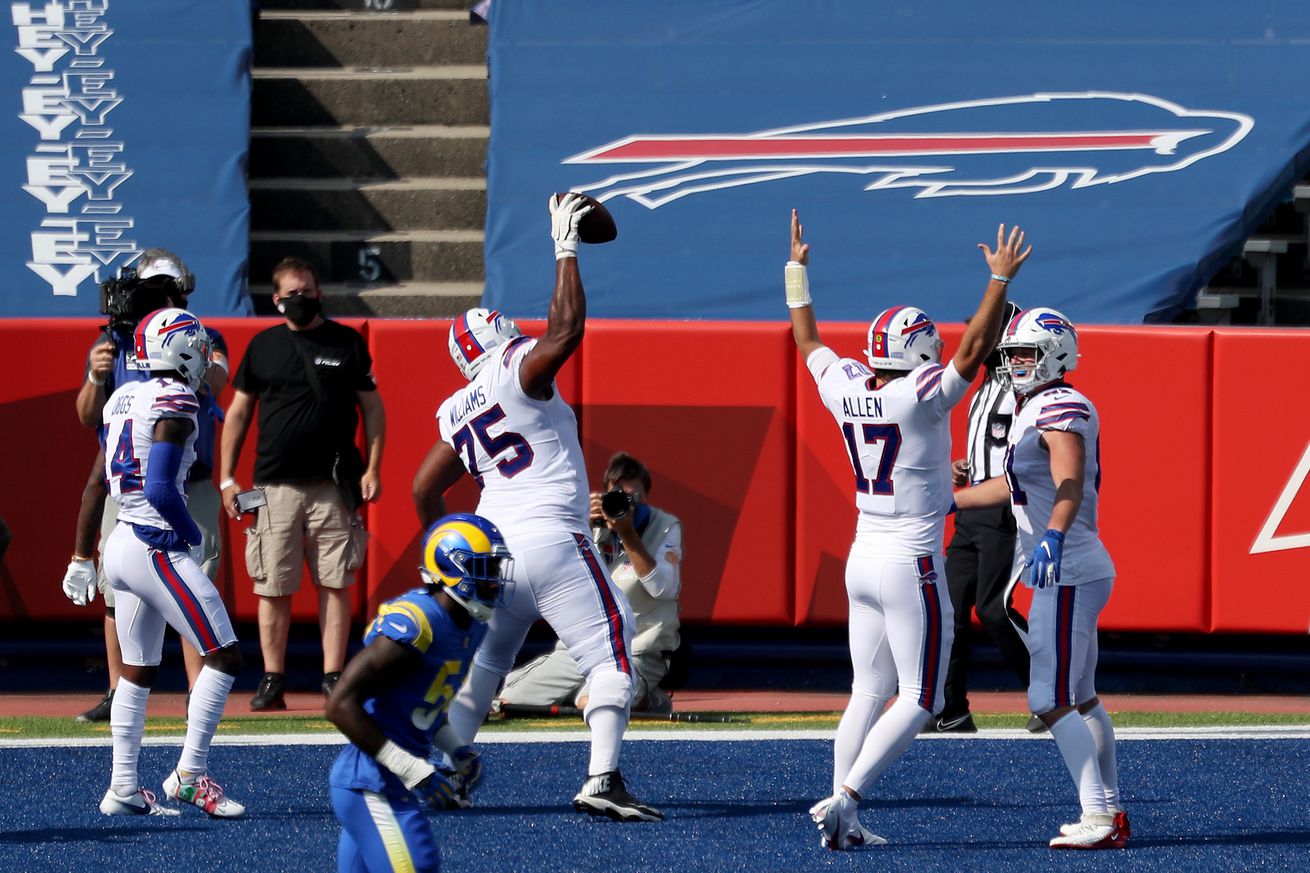 The Bills gave us a collective heart attack, but they are 3-0!

The Buffalo Bills looked as if they were going to win in blowout fashion on Sunday, opening up a 28-3 lead on the Los Angeles Rams before the 2018 Super Bowl participants realized there was a game to be played. After the Rams roared ahead 32-28, the Bills were able to eke out a 35-32 victory.

Our five players to watch all played vital roles in the contest, for better or worse. Here is how our spotlight players fared.

Man oh man, it’s really great watching this young man develop. After taking small steps towards competence over the last two seasons, Allen has taken a giant leap towards stardom early in the 2020 campaign. His touch, his ball placement, his accuracy, and his decision-making have all been improved. Does that mean he’s perfect? No! Sure, he missed John Brown by ten yards on his second pass of the day, and he threw up a prayer to Tyler Kroft that was somehow ruled an interception when both Kroft and safety John Johnson III were on the ground with the ball at the same time, but he was magnificent for much of the day. He ran himself into a few sacks, especially on the last drive, but that was partially a product of Aaron Donald destroying Buffalo’s interior offensive line by himself. Perhaps you disagree with the lateral attempt to Isaiah McKenzie, as well, thinking it was too risky (I thought it was a worthwhile risk—if McKenzie catches that, he’s walking into the end zone). At the end of the day, Allen threw for four more touchdown passes, bringing his season total to ten. He ran for another touchdown and eclipsed 300 yards passing for the third consecutive game. He converted a 3rd-and-22 by throwing an absolute dart to Cole Beasley on the game-winning drive, and he set up a manageable fourth down play by hitting Stefon Diggs on 3rd-and-25 one play before the Rams committed a pass-interference penalty to set up the winning score. Allen is moving past his negative plays, keeping himself in tune with his receivers, and using his legs to give himself better throwing opportunities rather than as a crutch for his lack of confidence in finding open receivers. This is the guy the Bills thought they were drafting in the first round of the 2018 NFL Draft.

Diggs’s stat line was fairly quiet, as he caught four passes for 49 yards and a touchdown on the afternoon. However, he had two separate touchdown catches erased, one via instant replay and another via penalty, and he was mirrored by Jalen Ramsey all day long. On his lone touchdown grab that did count, Diggs expertly worked Ramsey in the end zone, beating him to the middle of the field when he should have had no business winning there. Diggs has been exactly what this offense needed, and on a day where John Brown missed the entire second half thanks to an injured calf muscle, it was Diggs who continued to draw coverage away from players like Beasley, who finished with six catches for 100 yards, and Gabriel Davis, who caught four passes for 81 yards in his best day so far as a pro.

I wrote that Ford had played right guard exclusively in our preview, so of course the Bills went and played him at left guard on Sunday just to keep me honest. Ford was excellent throughout the entire afternoon, as he was able to slow the All-Pro Donald down far better than right guard Brian Winters, who was repeatedly rag-dolled throughout the afternoon. When 2019 starter Jon Feliciano is eligible to return from injured reserve, you have to think that he will slot right back in at right guard, leaving Ford as a great option on the left side. The running game looked especially tight on Sunday with Ford leading in some pulls, as he used his speed and his nasty to clear space for Devin Singletary, who carried 13 times for 71 yards, and T.J. Yeldon, who handled three hand-offs and gained 18 yards. What becomes of Quinton Spain, who played nearly every snap in 2019, is the larger question.

Buffalo’s 2019 first-round pick had one tackle and one quarterback hit on Sunday. Oliver appeared on 39 defensive snaps, and he was largely a non-factor throughout the game. While the Bills were able to bring some pressure on quarterback Jared Goff in the first half, once the Rams started moving laterally and involving some play-action into the equation, the Bills’ defense had no answers. Buffalo was gashed on the ground, as well, as the Rams ran 32 times for 167 yards on the afternoon—a pretty amazing feat when you consider their 25-point deficit in the third quarter.

The problem with having a corner as good as Tre’Davious White is that everyone else isn’t Tre’Davious White. I am guilty of being a little spoiled when it comes to the “other” guys in the secondary, and while Levi Wallace was able to intercept a pass in the first half and Taron Johnson was able to make some solid tackles on the day, I found myself angry that so many Rams wideouts were so open in the second half. Check out Cooper Kupp’s receiving chart, for example. Which side of the field does White play? Most defenses won’t throw at him because they know it isn’t worth the risk, which means that the other players need to be ready to see plenty of action. Johnson had 11 tackles, including two tackles-for-loss in shutting down Los Angeles’s screen game. Johnson did not have a pass breakup, and he was merely “okay” in coverage. He took all of the nickel corner snaps, as Siran Neal played only 14 special teams snaps this week.