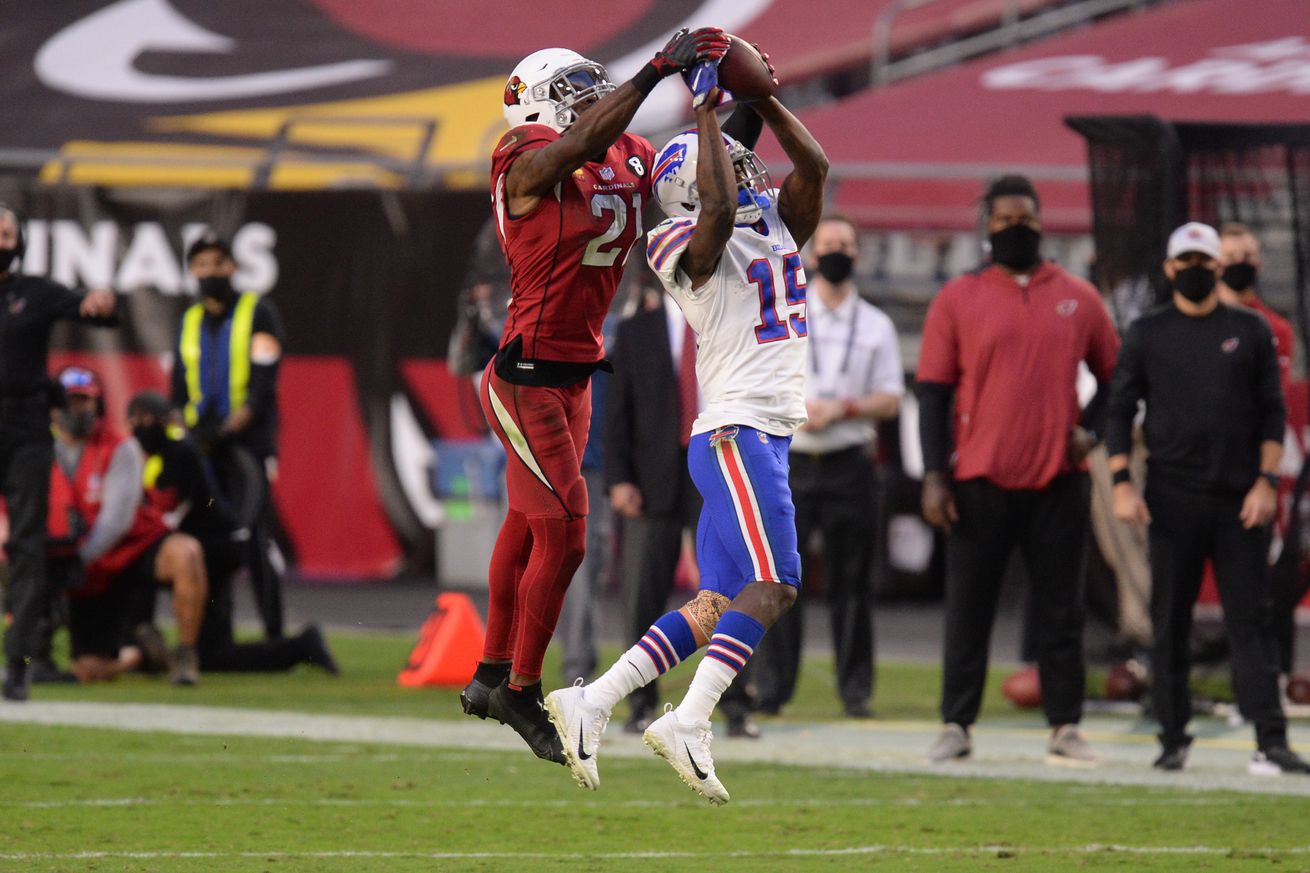 The feel of this game swung so many times on Sunday

Man, that was tough.

The Buffalo Bills had pulled victory out of the jaws of defeat against the Arizona Cardinals, overcoming their standard third-quarter malaise and some turnovers to take a 30-26 lead with 34 seconds remaining. The boys were celebrating, and deservedly so: The Bills were going to be 8-2 for the first time since 1993, and they were on the way to defeating a legitimate NFC playoff contender.

Of course, we all know what happened next, as Buffalo took that victory and tossed it right back into defeat’s grip, failing to follow Tom Jackson’s advice and “just knock it down” at the end of the game. To be fair, it took an absolutely incredible play from arguably the league’s best wide receiver to beat the Bills this week. When the dust settled, Buffalo had a 32-30 loss rather than their 30-26 victory.

Which of our players to watch met or exceeded expectations this week? It was a mixed bag overall.

At times, Allen looked quite confused on Sunday. He was intercepted on multiple attempts for the second time this season, as Patrick Peterson and Dre Kirkpatrick each picked Allen off once. Peterson very easily could have had two more interceptions, as he proved the old adage that if cornerbacks could actually catch, they’d probably be wide receivers. Peterson had two picks slip out of his hands before finally coming down with one. For his day, Allen still managed a strong stat line, completing 65% of his passes for 284 yards, two touchdowns, and two interceptions. He added seven carries for 38 yards on the ground, and he also caught a 12-yard touchdown pass from Isaiah McKenzie to open the scoring for Buffalo. Fourth-quarter Josh came up big again when it counted, as he really should have secured the 12 game-winning drive of his career. Instead, he had to watch as Kyler Murray connected on a Hail Mary to secure the victory for the Cardinals.

After some strong work over the last few weeks, the running game was back to brutality on Sunday. Moss and Devin Singletary combined for only 35 yards on 11 carries. Yes, that’s less than Allen had himself. Moss had seven carries for 20 yards, and he out-snapped Singletary for the second straight week. Moss also made one catch, losing three yards on the first play in Cardinals’ territory on Buffalo’s final offensive possession. Offensive coordinator Brian Daboll has to find a way to open some room for the running game, as the Bills have become far too predictable in that phase. Moss clearly has the trust of the coaching staff, but he needs to up his production.

Injuries have clearly limited Brown this year, as he had missed time due to calf and knee injuries coming into this game. On his first catch of the game—a screen pass that should have looked familiar to our readers—Brown looked bothered by the knee, as he was unable to use his blazing speed to find the end zone. On his final catch of the game, an incredible 24-yard grab on 3rd-and-23, Brown’s ankle was caught underneath his body, bending awkwardly. While he was able to walk off the field, he did not return to the game. Adding insult to literal injury, the catch was nullified by a penalty on Brian Winters. Brown finished with six catches for 72 yards on eight targets. Hopefully, the bye week will give him time to heal up from his various ailments.

There was far more good than bad to Edmunds this week, continuing his positive trend from the week prior in Buffalo’s victory over the Seattle Seahawks. Edmunds made ten tackles, which was second on the team to A.J. Klein (speaking of players who have been excellent lately). It was the plays that didn’t appear on the stat sheet, though, that impressed me the most. One in particular was a third-down play where Kyler Murray was looking to break contain. Edmunds flew in from the middle of the field, forcing Murray to take a wide berth towards the first-down marker. Defensive end A.J. Epenesa came and made the tackle, but it was Edmunds who kept contain just long enough to give his teammate a chance. Edmunds looked good in all phases on Sunday.

This is two meetings in a row now where White has done well against DeAndre Hopkins, only for the All-Pro wideout to make a couple of tremendous plays to sway momentum. In the Wild Card Playoffs last year, it was a 41-yard grab to set up the go-ahead touchdown. This year, it was a crazy catch on a beautiful Hail Mary pass. Hopkins saw 12 targets on the day, making seven grabs for 127 yards and a touchdown. Until the 11-second mark, He had six grabs for 84 yards. White had three tackles on the day, but he made Hopkins earn everything. He came up just short on the biggest play of the game, however, for a variety of reasons better explained by Skarekrow in the immediate aftermath of the game.