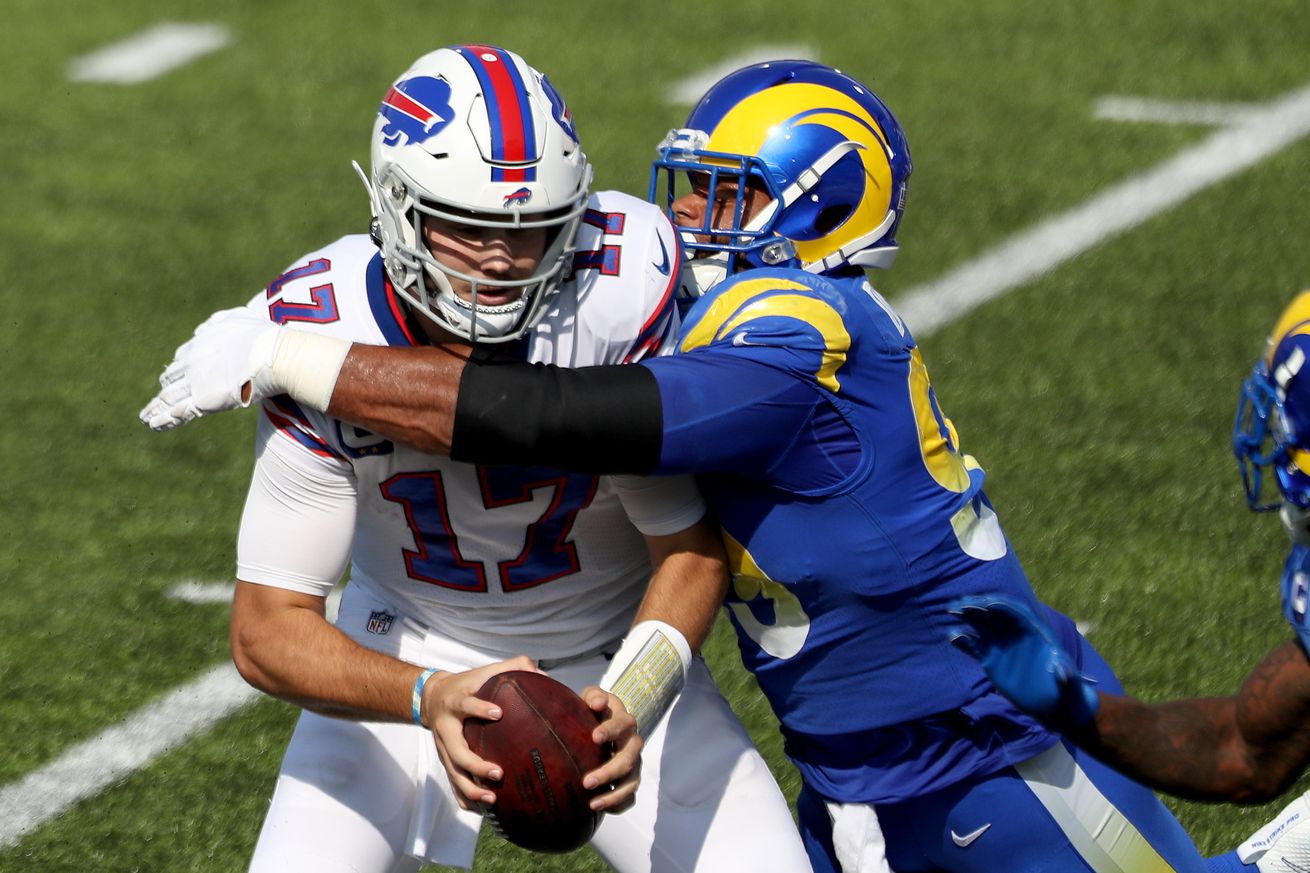 The Rams were out, then they were up, and then they lost

The Los Angeles Rams came east for the second straight week, but this time, they left with a loss at the hands of the Buffalo Bills. After Buffalo ran out to a 28-3 lead, the Rams quickly turned the tide, scoring 29 unanswered points to take a 32-28 lead with under five minutes left in the fourth quarter.

While the Bills were able to pull out a quality victory over a fantastic opponent, the Rams had no shortage of great outings from their star players. Here is how our spotlight players performed on Sunday.

My son, who is six, saw Goff’s name on the TV and asked me, “Why is the Rams’ quarterback named Goof?” After correcting him, I told him that a goof is what we hoped Goff would look like, and for one half of football, that’s exactly what happened. At the half, Goff was 9-of-13 for 94 yards with an interception, and he’d been sacked twice. Goff, along with the rest of the Rams, was incredible in the second half, as he finished the game with a total of 321 yards passing, completing 23-of-32 attempts for two touchdowns and the aforementioned interception. The Rams used motion and play-action to calm Buffalo’s pressure in the second half, and they moved the pocket a bit for their signal caller, as well. Goff responded with an outstanding half of football that was nearly enough for an incredible comeback victory.

Our old friend looked every bit the stud that he’s become since moving back home to L.A., as Woods did what he does best. He found space in zones, he threw great blocks in the run game, and he took a few hand-offs to gain rushing yardage on some sweeps to keep the Bills’ defense honest. Overall, Woods caught five passes for 74 yards and a touchdown, adding 30 rushing yards on three carries to his ledger. Woods wasn’t his team’s top receiver (that honor went to Cooper Kupp, who caught nine passes for 107 yards, both game-high totals, and one touchdown), but he was excellent when Goff needed him to be. That’s been Woods’s game from the start, as he is incredibly reliable and tough.

One week after allowing Mike Gesicki to have a career day, the Bills were able to shut down Higbee, who caught just two passes for 40 yards. With Tremaine Edmunds and Matt Milano back in the lineup, the tight end was bound to have a more difficult time, and while Edmunds, in particular, did not look to be at full strength during the game, the presence of those two ‘backers was enough to force the Rams to look elsewhere.

After a relatively quiet first half, Donald nearly ended the game by himself in the second half. He was a one-man wrecking crew in the fourth quarter, destroying guard Brian Winters and the rest of the Bills‘ offensive line with his devastating combination of speed and strength. Donald had six tackles, two sacks, two tackles-for-loss, three quarterback hits, and a forced fumble that he then recovered himself to set up the Rams’ go-ahead touchdown drive. Donald chased Josh Allen all over the field on Buffalo’s game-winning drive, as well. Donald showed exactly why many people believe he is the best football player, full stop, in the NFL today.

Ramsey did well in handling Stefon Diggs, as Buffalo’s top wideout only managed four catches for 49 yards. One of those grabs, however, was a touchdown that put the Bills ahead 28-3 in the third quarter. Ramsey had Diggs boxed out against the sideline, but he allowed Buffalo’s top wideout to beat him to the middle of the field, and Josh Allen hit his man for a beautiful touchdown pass. Ramsey had one tackle and one pass breakup on the day.