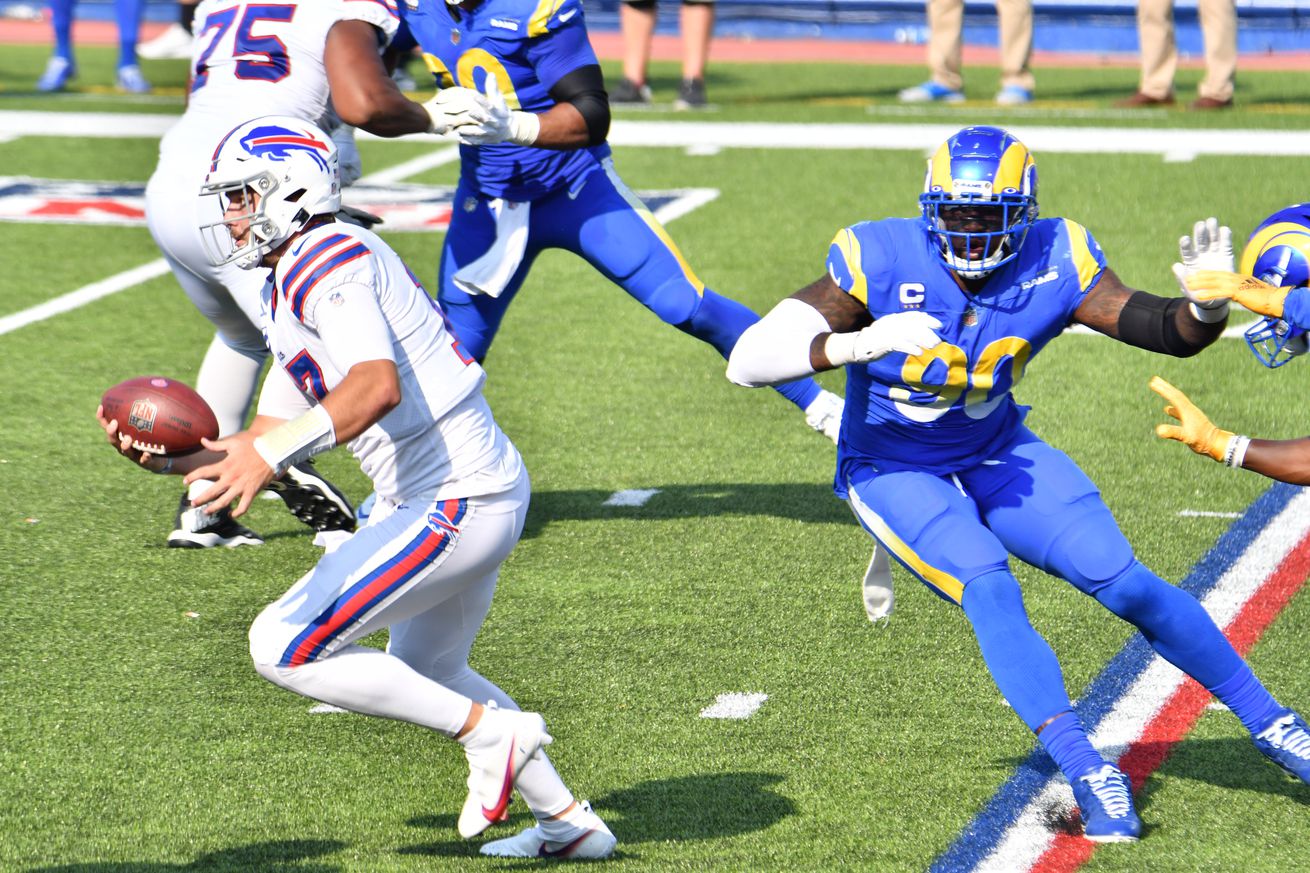 The Josh Allen experience was on full display.

Josh Allen is a maniac. He stiff-arms linebackers, trucks defensive linemen, heaves balls 50 yards down the field to double-covered fullbacks in overtime of the playoffs, and refuses to give up on every play. While his reckless play can sometimes can get him into serious trouble, it sometimes pays off and is a big reason he is one of the most entertaining players to watch in the NFL today—and also a strong, early candidate for MVP.

On Sunday, things started out just the way the Buffalo Bills wanted. Allen was able to move the Bills up and down the field and make a good Los Angeles Rams defense look unrecognizable. He accounted for all three of Buffalo’s touchdowns in the first half (one rushing and two passing) to give the Bills a 21-3 lead entering halftime. The third quarter even started well for the Bills on offense—something that we haven’t been able to say much about this team the past two years. Allen was able to get another passing touchdown to Stefon Diggs early in the third to make it a 28-3 lead. From there, it looked like the Bills could cruise to a victory. Then it happened.

The Rams were able to drive down the field for a touchdown to make the score 28-10. The next drive for the Bills resulted in a questionable interception call that stood after the officials reviewed it. The momentum of the game completely shifted after that, and it looked for a second like the moment was getting to Allen. He took an unsportsmanlike conduct penalty after arguing for a flag for a horse collar tackle that Aaron Donald made on him. Following the interception, the offense was in neutral and everything that worked for them before began to fail. The Rams ended up taking the lead late in the fourth and Josh Allen was asked to do it again.

Allen got the ball back with just over four minutes remaining, needing a touchdown to win it. These are moments where he has thrived, and he did it again Sunday. Allen converted on 3rd-and-22 on a pass to Cole Beasley to keep their final drive alive. Later on that drive the Bills were given a break on a defensive pass interference call on cornerback Darious Williams that would’ve ended the game as Allen’s pass was incomplete. The next play Allen was able to toss his fourth touchdown of the day to Tyler Kroft and give the Bills a dramatic come-from-behind victory.

Allen isn’t perfect. No quarterback is in the NFL. He has his flaws and all of his reckless tendencies. He’ll throw across his body in the middle of the field because he sees someone breaking open late. And yes he may throw an interception on those plays, but there is no doubt about it—Josh Allen is absolutely fearless and is the reason this team was victorious. He has an ability to completely forget any negative plays he has earlier in games. It’s clear this team loves to play for him and would run into a brick wall if he asked for it. He’s shown multiple times throughout his young career that he has a flare for the dramatics and plays his best football late. While it may not be great for the hearts of Bills fans, it gets them wins, and nobody is complaining about that.