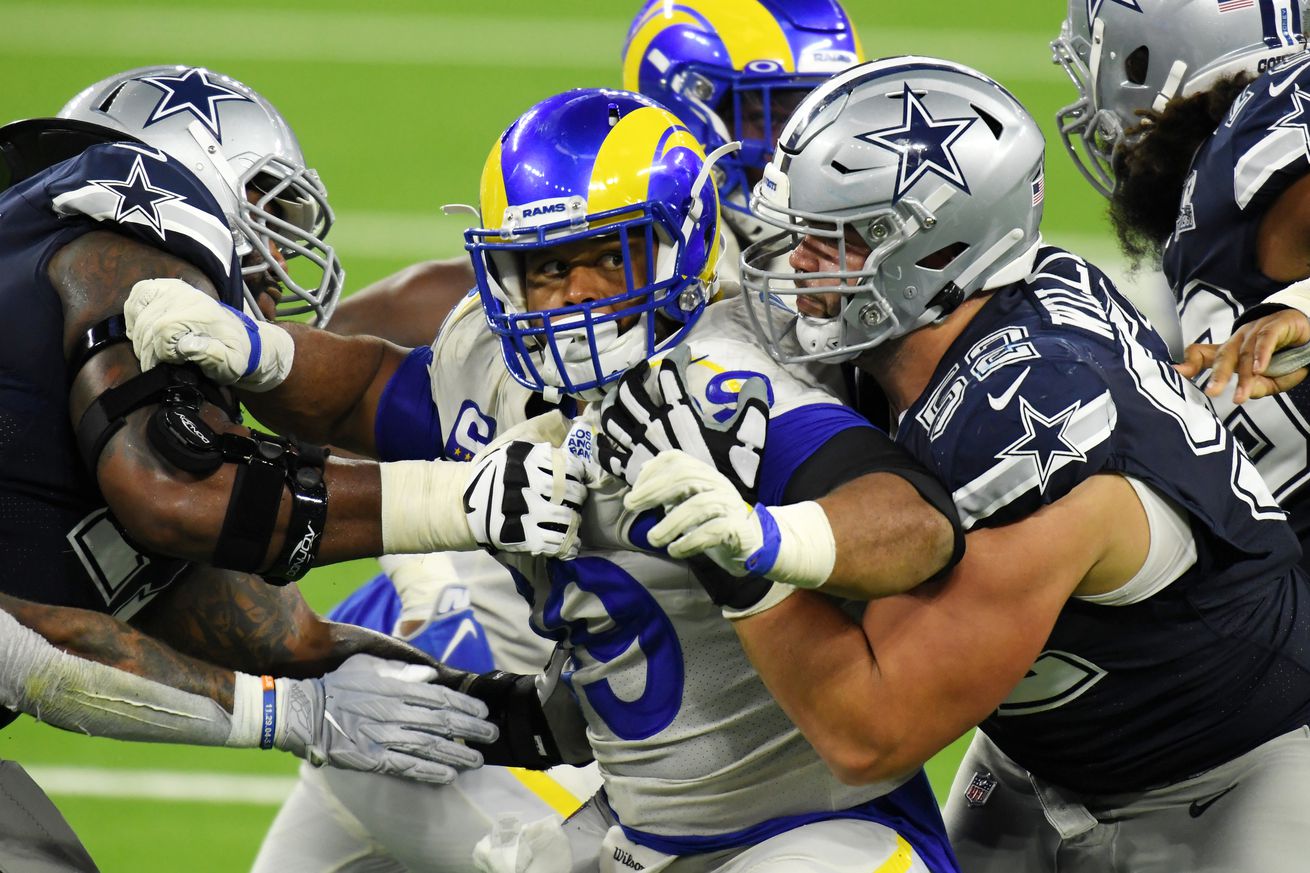 The Rams pose quite a challenge for Buffalo

The Buffalo Bills host the Los Angeles Rams this Sunday in a battle of undefeated teams. This could be one of Sunday’s top games, with the Bills looking to prove that their impressive victories over weaker squads were indicative of a great team taking care of business rather than a team feasting on mediocre competition.

The Rams, on the other hand, look to win their third straight game against an East Division team, though their first two opponents—the Dallas Cowboys and the Philadelphia Eagles—hail from the NFC East and not the AFC East.

Which Rams players are we watching this weekend? The ultra-talented 2018 Super Bowl representatives have plenty of great players.

The Rams’ signal caller is outstanding when he’s given time to throw but, like most quarterbacks, he doesn’t take too kindly to pressure. The Rams’ offensive line has allowed Goff to face some heat this year, though a quick release and excellent play design have kept the sack total down. Goff has only been sacked twice while completing 69% of his passes for 542 yards, three touchdowns, and one interception. If he can work the play-action game and hit his receivers over the middle, Buffalo may be in for a long day defensively. The Bills have to hit Goff early and often to speed up his internal clock. Once they do that, they’ll be in the driver’s seat for the afternoon.

Hello, old friend! The former second-round choice of the Bills is still immensely popular among Bills fans, and his career has absolutely taken flight in L.A. Woods has eight catches for 119 yards this year, but since leaving Buffalo for Southern California, he has hauled in 240 receptions for 3,253 yards and 13 touchdowns in three-plus years. If Woods draws Tre’Davious White, then his day will be a difficult one, but the scrappy wide receiver is someone who manages to find ways to make big plays. The Bills will need to make sure they guard against the slant route with him, and the safeties will have to be wary of Rams head coach Sean McVay exploiting that wariness with double-moves to make chunk plays against the Bills’ defense.

After allowing Miami Dolphins tight end Mike Gesicki to have a career day last week (eight catches, 130 yards, 1 touchdown), the Bills face a tight end coming off a career day of his own. Higbee caught all five of his targets last week for 54 yards and a career-high three touchdowns in the game. For the year, the 6’6” tight end has eight catches for 94 yards and those three touchdowns. Even if Tremaine Edmunds and Matt Milano are able to return for the Bills, there will be questions about just how healthy they are. The Rams will try to find those answers early, and I expect that Higbee will be a frequent target off of play-action throws over the middle on Sunday.

The Rams’ All-Pro defensive tackle is a one-man wrecking crew. For his career, Donald has 321 tackles and 73 sacks. As a defensive tackle. That sack total in merely six-plus years would be impressive for an elite edge rusher, but for a defensive tackle? Donald could never play another down of football again and he would be a Hall of Fame player. The interior offensive line trio of Quinton Spain, Mitch Morse, and Cody Ford will have their hands full this week. We could see less of running backs Devin Singletary and T.J. Yeldon in the passing game, as well, because even though a running back can’t block Donald, as you can see from the picture in this article, it takes a village to try to slow him down. Offensive coordinator Brian Daboll hasn’t slept well this week thinking about Donald, but the Bills will need to slow him down if they’re going to win on Sunday.

“Josh Allen is trash.” That’s all there is to it. Every time the Bills and the Rams meet, and every time that Allen squares up against a team that employs Ramsey, this is going to play in his mind. Allen will say all the right things publicly, but we all know that his teammates and coaches are reminding him of that comment…not that Allen needs reminding. The chip on Allen’s shoulder is a big one, and if he can continue to play at the level he has through two weeks, then he will have the last laugh in this saga. Ramsey will shadow Stefon Diggs, Allen’s favorite target through two weeks, so there will be plenty of chances to show Ramsey that his definition of garbage needs to be tweaked. This will be a fun match-up on Sunday.