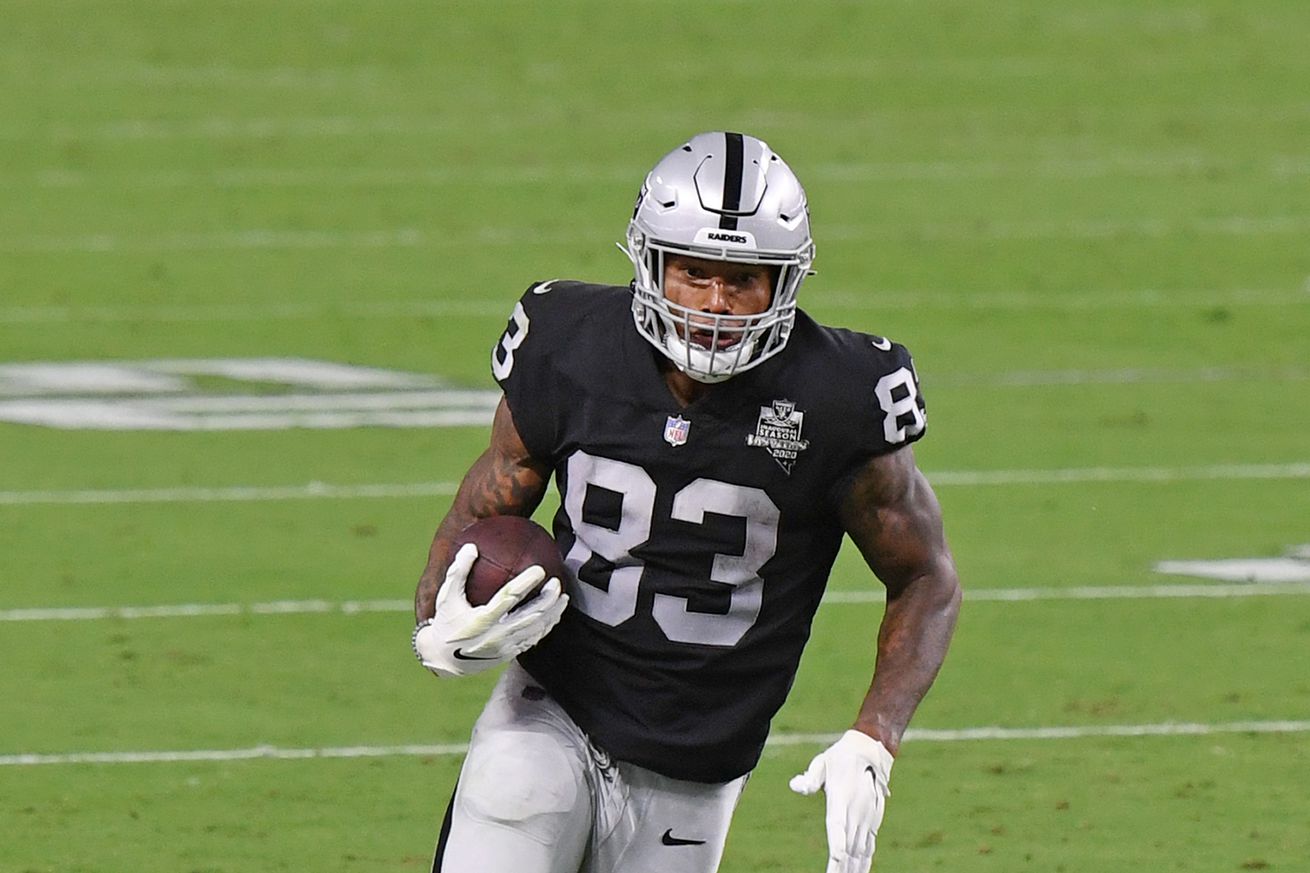 The Las Vegas Raiders are off to a solid start, boasting a 2-1 record heading into this week’s showdown against the Buffalo Bills. Buffalo is undefeated, and both teams have shown similar characteristics thus far during this young season. The Bills have scored 90 points and allowed 77 through three games, while the Raiders have scored 88 points and allowed 90.

Expecting a defensive battle is not wise this week, as both teams boast enough offensive firepower to light up the scoreboard. Las Vegas will be down some key players in Buffalo’s first trip to Sin City, however, so others will need to step up.

Which Raiders are we watching this week? Here’s our list.

The Raiders’ quarterback has followed up a very strong 2019 campaign with an excellent start to his 2020 season. Carr is completing 74% of his passes right now, averaging 7.8 yards per attempt and nine air yards per attempt. He’s thrown six touchdowns without an interception so far. In years past, Carr would check the ball down repeatedly, looking to avoid hits at the expense of making plays. After averaging eight air yards per attempt last year, he’s continued the trend of attacking downfield more. He’s missing two of his better weapons this week, as rookies Henry Ruggs III and Bryan Edwards both are expected to miss the game, so it will test his willingness to throw to ancillary pieces like Zay Jones against a Bills defense that has shown some weaknesses over the past two weeks.

Speaking of players who could exploit some of Buffalo’s weaknesses, Jacobs is an ultra-talented back who has seen a dip in efficiency this season. After rushing for 1,150 yards and averaging 4.8 yards per carry as a rookie in 2019, Jacobs has averaged just 3.7 yards per tote this year. He has totaled 252 rushing yards through three games thanks to sheer volume, but the efficiency hasn’t been the same. After holding the New York Jets to just 52 rushing yards on 15 attempts in Week 1, Buffalo allowed the Miami Dolphins and the Los Angeles Rams to rush for a combined 54 carries and 266 yards in two games since. The Bills need to solve their run gap issues fast; otherwise, Jacobs may have a field day on Sunday.

Las Vegas has one of the league’s best tight ends. Waller doesn’t have the accolades of a George Kittle, Travis Kelce, or Zach Ertz, but he put up some incredible numbers last season. He led the Raiders in targets (117), catches (90), and receiving yards (1,145), hauling in three touchdowns along the way. At 6’6” and 255 lbs, he’s an incredible athlete who has the speed and route-running ability of a receiver mixed with the size and strength of an old-school NBA power forward. Matt Milano and Tremaine Edmunds are both expected to play, and the Bills did a nice job containing Rams tight ends Tyler Higbee (2-40) and Gerald Everett (2-34) last week, but they were absolutely eviscerated by Mike Gesicki in Week 2 (8-130-1). That game, of course, was without Edmunds and Milano. The Bills will need their top linebackers to do their thing against Waller, who was off to a great start again this year, catching 18 passes for 150 yards and a touchdown in the Raiders’ first two games. A date with Bill Belichick and the New England Patriots last week slowed Waller’s roll (2-9), so the Bills would be wise to study what New England did well and apply it this week.

Las Vegas’s top corner is Mullen, who has only been targeted ten times this season. He’s allowed five receptions for 36 yards and one touchdown. Last year, quarterbacks only had a 78.3 quarterback rating when targeting Mullen, and he only allowed two touchdowns all season. At 6’2” and 200 lbs, Mullen is big, physical, and fast. He will probably draw Stefon Diggs for the majority of the day, and if he can continue the success he’s had thus far in his young career, he could make life difficult for Buffalo’s much-improved aerial attack. Mullen has four pass breakups in three games this year.

Two corners? Yep, two corners. The Bills have thrown the ball on 114 of their 198 plays from scrimmage, and with a receiving group that is among the league’s best, any team needs to have multiple solid corners to slow them. Joyner has been a weaker link in the Raiders’ secondary for the last two years, as he’s allowed a 70% completion rate for 648 yards and four touchdowns over the last 17 games that he’s played with Las Vegas since 2019 (when the team was in Oakland). Joyner should match up with Cole Beasley, who has 15 receptions for 228 yards so far this season. I’d expect him to have another big game this week.