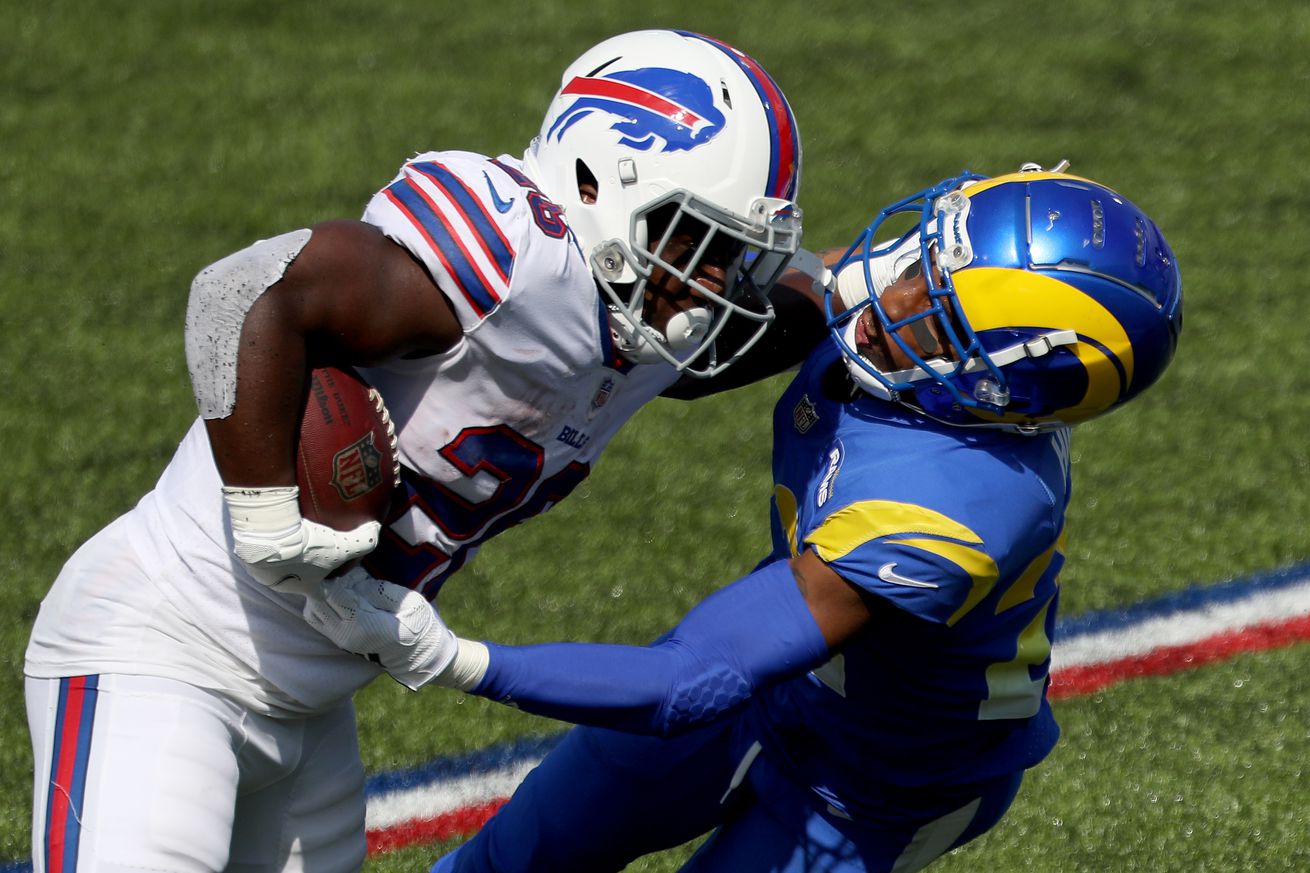 The Buffalo Bills were perfect in September, winning all three of their games during the 2020 NFL season’s opening month. They look to make it four in a row this week when they head west to take on the Las Vegas Raiders.

It’s Buffalo’s first trip to the Raiders’ new home, and I’m sure that more than a few members of Bills Mafia would have loved to attend if not for a pandemic. Given that no fans will be in the stands, this contest will be similar to the ones played in Orchard Park thus far this season.

We’ve kept tabs on many of the same players throughout the season’s early going, and that won’t necessarily change this week. Here are five key players for the Bills we’ve deemed important if they’re to start a perfect 4-0.

The third-year man has barged into the early-season MVP discussion, eclipsing 1,000 yards passing and hitting double-figures in passing touchdowns through the first three games. Against a Las Vegas defense ranked No. 27 in yards allowed, Allen should have another opportunity to thrive. His chemistry with new acquisition Stefon Diggs has been obvious, but the second year with Cole Beasley has created great returns, as well. Beasley is currently second on the team in targets (20), catches (15), and receiving yards (228), trailing only Diggs in all three categories. With John Brown hampered by foot and calf injuries, the Bills could turn to Beasley and rookie Gabriel Davis, who had a big day last week (four catches, 81 yards) more if Brown is unavailable. Regardless of who steps on the field Sunday, Allen has played so well that he looks poised and able to elevate those players. That’s exactly what a franchise quarterback does.

That 27th-ranked Las Vegas defense has allowed an average of 164 rushing yards per game so far this season. That’s a good sign for Singletary, who may not have the volume numbers, but he has remained remarkably efficient in the early portion of the season. Singletary is averaging 4.9 yards per carry, totaling 32 rushes for 157 yards so far, and he has yet to find the end zone. He has also been valuable as a receiver, hauling in 11 receptions for 93 yards. The Bills have run more “10” personnel (four receivers, one running back, no tight ends) than any team in football, perhaps leading to fewer rushing attempts overall. However, if Brown were to miss the game, I could see the Bills in “11” personnel more often (three wideouts, one back, one tight end), thereby giving the team an extra blocker. This may be the week where Singletary shines.

The newcomer has out-snapped every other defensive tackle thus far, playing on 63% of Buffalo’s defensive snaps for the season. Jefferson has just five tackles and one quarterback hit to show for it so far. When one-gap tackle Star Lotulelei opted out of the season, I assumed that Vernon Butler would see the majority of snaps next to Ed Oliver. Perhaps due to a hamstring injury that caused him to miss game one, Butler has only played on 39% of the snaps in the two games he’s been active. That’s fourth in the rotation behind even Harrison Phillips. A week after Buffalo was gashed on the ground by the Los Angeles Rams, Jefferson and company are going to need to step up in order to contain the extremely talented Josh Jacobs.

Speaking of people who need to step up this week, the Bills’ starting middle linebacker looked lost at times last week in his return from a shoulder injury. Edmunds was over-reacting to the Rams’ motion, then was slow to react to holes at points, especially in the second half. The FOX broadcast crew did highlight one play where Edmunds fought through traffic to make a stop at or behind the line of scrimmage, but for the most part, he was in turn-and-chase mode. Whether it was a product of rust coming off of an injury, the lack of penetration from the defensive line, or the brilliance of head coach Sean McVay, Edmunds did not outperform his replacement from the week prior, Tyrel Dodson. In 104 defensive snaps, Edmunds has eight tackles this season. Dodson has 12 tackles, one sack, and two pass breakups in 91 defensive snaps. Edmunds needs to play better, especially in a week where All-World tight end Darren Waller is sure to be a focal point.

I’m interested to see what the Bills do with White, as teams have been able to pick apart the defensive right side of the field thanks to Buffalo keeping White on the left. With two of the Raiders’ three top wideouts (rookies Henry Ruggs III and Bryan Edwards) looking like they’ll miss the game, Las Vegas will probably start Hunter Renfrow and Zay Jones outside. Of the two, Renfrow is obviously the bigger threat, though Jones will have plenty of motivation to play well against the team that drafted him. Will the Bills use White to shadow the better receiver? Or, will they keep allowing teams to throw at Levi Wallace, Taron Johnson, and Siran Neal by moving their top receiving threats to that side? Mixing in some more shadowing from White is something I’d like to see.