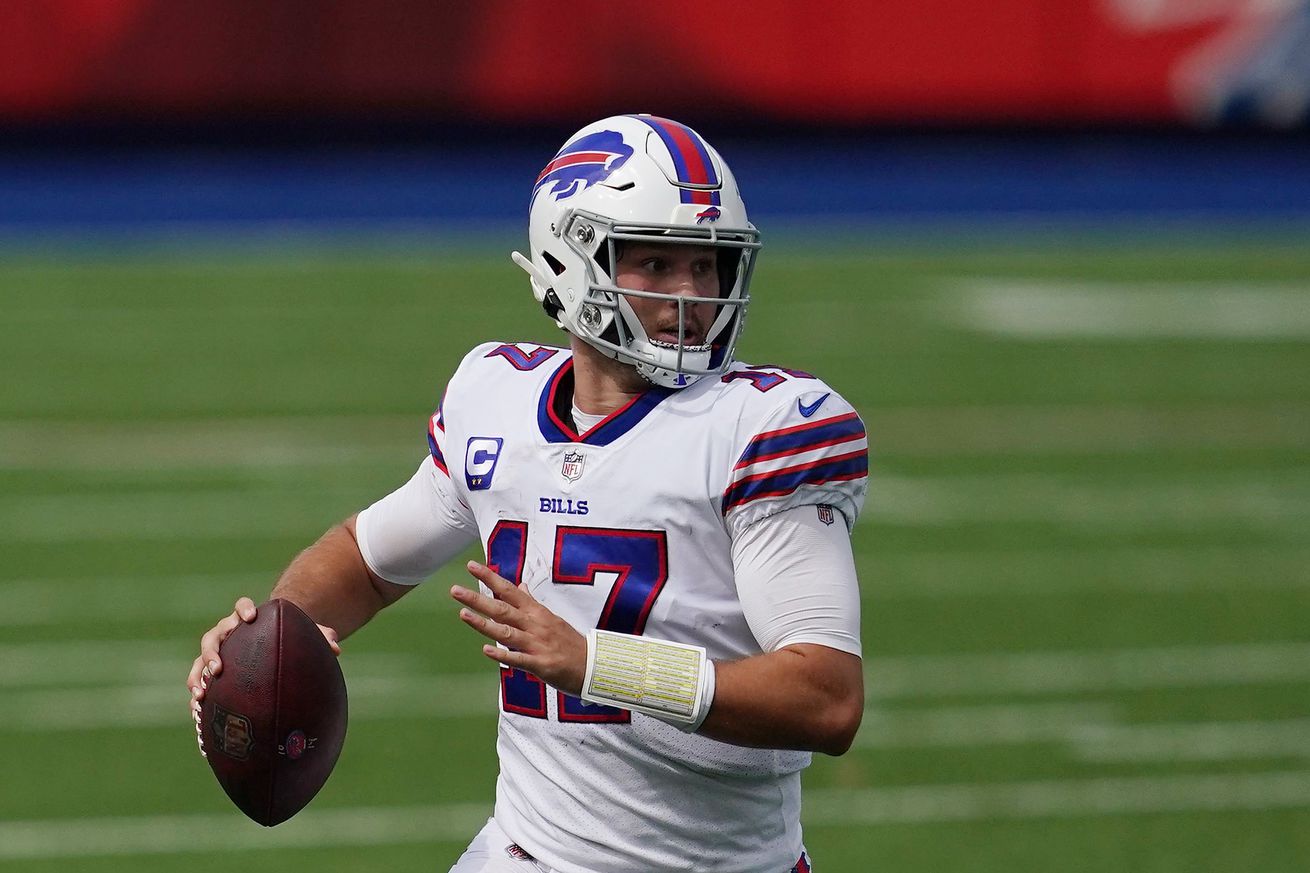 Will Josh Allen continue to be a fin squisher?

The Buffalo Bills look to move their record to 2-0 on the 2020 NFL season when they travel south to face off against the Miami Dolphins this Sunday. The Bills have had plenty of recent success against their divisional rivals, winning five of the last six meetings between the clubs.

Miami is coming off a tough loss against the New England Patriots in their opener, and while many are waiting for first-round pick Tua Tagovailoa to enter the starting lineup, they’ll have to wait at least one more week, as head coach Brian Flores announced that old friend Ryan Fitzpatrick will start once again for Miami.

We’ll talk more about Miami’s key players in a different article. For now, let’s focus on “our guys” to see who we’re watching this weekend.

If Allen could play against Miami every game of his career, he’d have already won an NFL MVP award. In four career games against the Dolphins, Allen has been fantastic. Of his 32 career touchdown passes, ten of them have come against the Dolphins. He’s 72-of-118 (61%) passing in those games, totaling 913 yards, ten touchdowns, and three interceptions. Allen has also added 29 carries for an absurd 318 yards and three touchdowns in those games. After a career-best output last week where he completed 33-of-46 passes (71%) for 312 yards and two touchdowns, Allen will look to continue his dominance against a divisional foe while bringing his team’s record to 2-0 on the year. Expect plenty of designed quarterback runs, especially after Cam Newton ran for 75 yards and two touchdowns on the Dolphins last week. While that may give some fans (myself included) heart palpitations given Allen’s penchant for fumbles and the obvious risk that comes with running the quarterback so much, containing the quarterback run is a clear weakness of Miami’s defense. Expect the Bills and Allen to exploit it early and often.

The rookie caught a touchdown pass in his first NFL game, but to say he underwhelmed as a runner is an understatement. Billed as a downhill runner who identifies holes and hits them hard, Moss looked hesitant in his first professional action, trying to pick his way through a stout New York Jets front on the way to a nine-carry, 11-yard day in his debut. Granted, this was his first action against another professional team ever, so it’s likely that he was merely finding his footing, literally and figuratively, in his first NFL game action. However, against a Miami run defense that finished No. 27 in yards allowed last season (and No. 22 in yards-per-carry average, allowing 4.5 per tote) and allowed 217 yards on 42 rushes (5.2 YPC) last week, Moss and second-year man Devin Singletary should have more room to operate. I expect a healthy dose of the rookie this week (who, along with Singletary, returns to his home state), and I think he’ll secure his first two career rushing touchdowns on Sunday.

Miami’s outside corners are strong, as Xavien Howard and Byron Jones make for a solid duo, and slot corner Noah Igbinoghene is a rookie with plenty of promise. That could leave Knox as Allen’s best match-up, as the hyper-athletic tight end will find himself matched up with slower linebackers in space. Knox had a solid day last week, catching two of his three targets for 26 yards. One of those plays was a gorgeous back-shoulder throw, and the other was a perfectly executed tight end screen pass. Knox should be a major focal point this week, and I expect that he’ll have a big day.

Given the injuries to Matt Milano (hamstring) and Tremaine Edmunds (shoulder), it’s very likely that the veteran will play nearly every down for the Bills this Sunday, especially if one of the team’s aforementioned studs sits due to the injuries they suffered last week. Milano missed practice on Wednesday and Thursday, so he looks like a long shot for Sunday, and Edmunds was able to log limited practices each day, but his availability is still in doubt. (UPDATE: Neither Milano nor Edmunds will play on Sunday, as both were ruled out early on Friday). Klein isn’t the athlete that Edmunds is (nobody is, to be fair), and he’s not close to Milano, either, but he is a smart player who knows head coach Sean McDermott’s defense inside and out. He’ll be tested, especially in zone looks, where Preston Williams, Jakeem Grant, and Mike Gesicki will create some issues in the middle for a defense that will be at less than full strength.

For reasons similar to Klein’s spotlight, Hyde will play a huge role in this one, as well. The safety has experience as a slot corner, and with Grant and Gesicki sure to be consistent targets for Fitzpatrick, Hyde will need to step in and help to take away the middle of the field. I assume that McDermott and defensive coordinator/assistant head coach Leslie Frazier will use Hyde and his partner, Jordan Poyer, alternately as deep safeties and “robbers” in the short-to-intermediate middle of the field, especially if Edmunds is limited or unable to play. Even if the big middle linebacker can go, the team will need to use some of its better athletes to compensate for the loss of Milano. Hyde is a “jack-of-all-trades” type who can blitz, cover running backs, tight ends, and wideouts in man coverage, and drop back as a deep-field safety to discourage the deep pass. A big game from Mr. Hyde will be a tremendous boost for Buffalo.