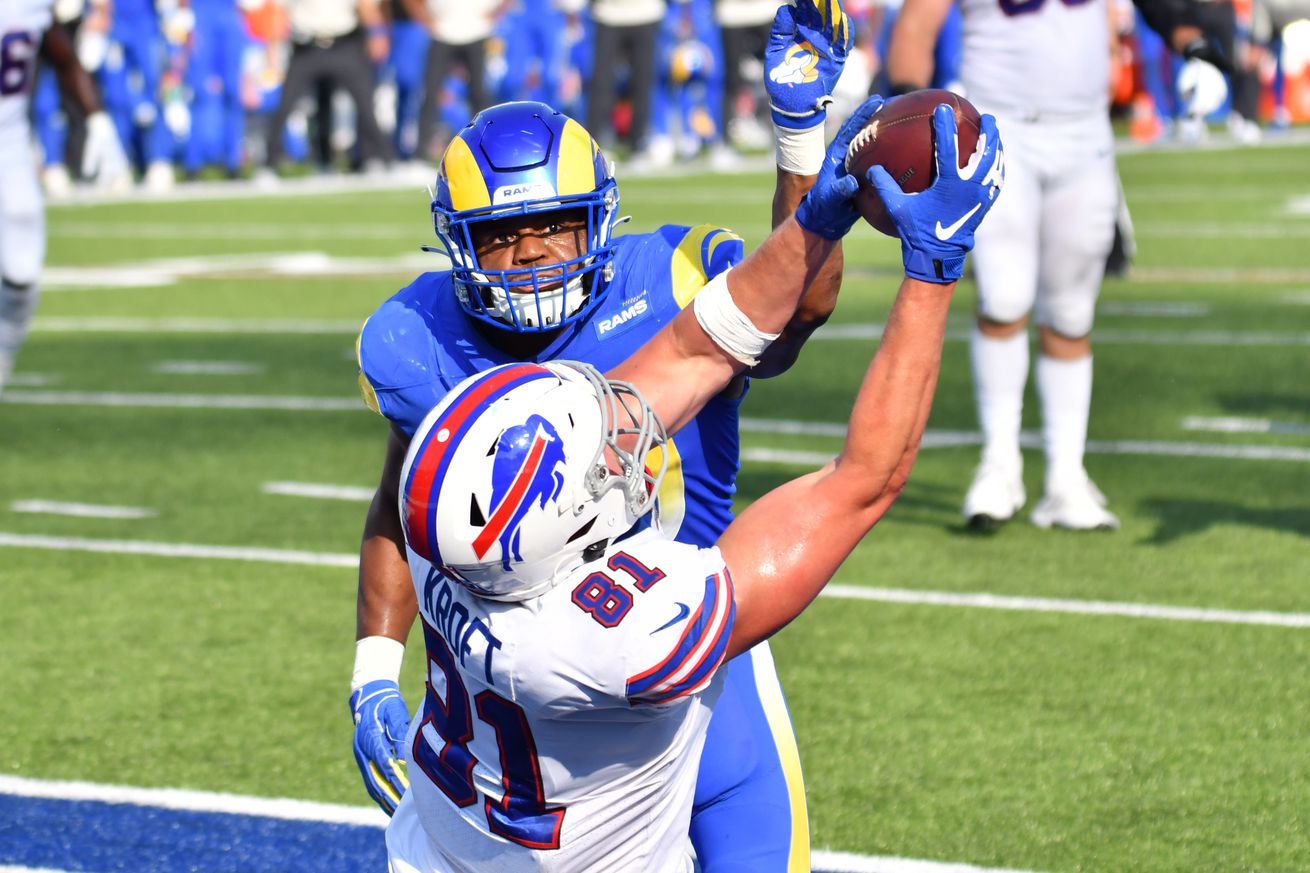 The Buffalo Bills pulled off an improbable collapse-turned-comeback on Sunday against the Los Angeles Rams, eking out a four-point win to move to 3-0. My initial reactions turned from extreme disappointment to relief, but these takeaways come to you from a clear mind.

The Bills were up 28-3 in this game. Then the Rams scored 26 straight points to go up 32-28. That’s 29 unanswered points if you’re counting at home. But then, something magical happened. The final drive of the game for the Bills went 11 plays and 80 yards and a huuuuuuuge touchdown to take the lead and earn the W. Buffalo needed a big penalty flag on 4th-and-9 to get to 1st-and-goal, but they capitalized on it to win the game. We sent a tweet to the Falcons blog after Buffalo blew the 28-3 lead hoping the football gods would smile upon us, and thus they have. 3-0 feels good.

IS THIS AN INTERCEPTION?? pic.twitter.com/BJX3RpO9mC

No. Tyler Kroft catches the ball and secures it. Then he hits the ground while being touched. That’s a catch, albeit nullified by a penalty. Even the FOX rules analyst called it a completion. Show that to 100 people, and how many of them give the football to the Rams? L.A. took it down the shortened field for a touchdown as part of their comeback attempt.

In #LARvsBUF, it’s not clear and obvious that Bills TE Tyler Kroft maintained control through the process of the catch, so the ruling on the field stands as an interception. pic.twitter.com/yE5ONhqgfi

The Bills allowed 167 yards on the ground, the most since their Week 8 loss to the Philadelphia Eagles in 2019. Maybe it’s the lack of Star Lotulelei, but the Bills’ rushing defense hasn’t been great this season. They’ve allowed 318 yards on 69 rushes in the first three games, a clip of 4.6 yards per carry. Against the Rams it was 5.2 yards per carry with Darryl Henderson going off for 114 yards and a touchdown on 20 carries. It seems the only thing that can help Buffalo’s run defense is a big lead, and even that didn’t help this Sunday.

In the first half, we thought it was going to be The Gabriel Davis Game. The rookie was all over the field with four catches for 81 yards on four targets. Then he was shut out in the second half. Stefon Diggs had a drop and a couple touchdowns overturned, but finished with four catches for 49 yards and a touchdown in another solid effort. Cole Beasley came up Billy-Fuccillo-HUGE on the last drive, He had 59 yards on three catches including a 22-yard third-down conversion on 3rd-and-22. John Brown was injured, sitting out the second half, and boy did they miss him. That led to a bunch of Isaiah McKenzie misdirection.

My oh my. Kroft was a revelation in place of an injured Dawson Knox. Four catches for 24 yards and two touchdowns, including a beautiful extension grab on the go-ahead score at the end of the fourth quarter. It’s nice to have second-wave players who can step up, but this performance may have earned Kroft more run. His very pregnant wife gets the Tweet of the Day, for sure:

Update: my husband is going to make me go into labor today @Kroft86 #BillsMafia

With Zack Moss on the sideline, Devin Singletary was a focal point of the offense. He ran the ball 13 times for 71 yards and hauled in four catches for another 50 yards. T.J. Yeldon had just three carries as the backup, and it was clear they trusted Singletary in every situation. Maybe it’s time to move further away from the 50-50 split we saw in the first two games.

Well, Josh Allen has had three straight 300-yard games just like we all expected. This week, he seemed rattled as the game wore on. He had another ill-advised lateral as the game was nearing its conclusion, took sacks when he shouldn’t, and lost a fumble. He also was dropping dimes and scored four freaking touchdowns. As long as Allen’s “only he can do that” plays outnumber his “what was he thinking” plays, we will be good. This week, they were about even. The interception he threw was definitely a bad decision, even if the refs blew the call, and there were more than a few times we thought he was rattled. But he’s also in the early MVP conversation and is probably going to stay atop the league leaders in multiple passing categories.