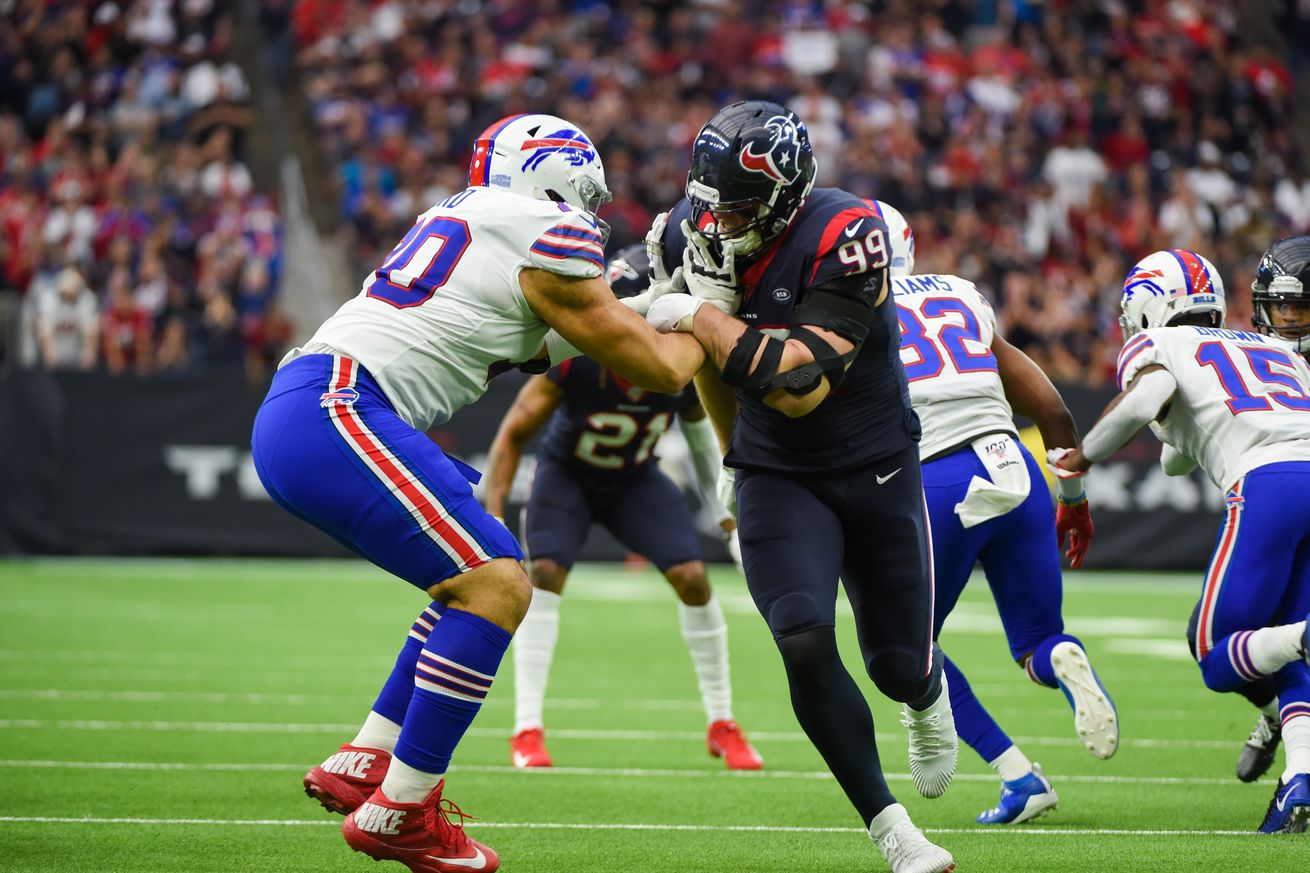 What’s going to happen at right tackle in training camp?

The Buffalo Bills invested plenty in their offensive line last offseason, signing seven players, drafting one, and handing out contracts that totaled just over $87 million. Only one player, Dion Dawkins, even remained on the 2019 roster after playing along the offensive line for the 2018 Bills.

This offseason, they kept their top four offensive tackles from a year ago and added a former All-Pro to the mix while trying to upgrade the depth at the position. It’s going to be intriguing how all of it shakes out, and players that have done very well in the league could find themselves on the chopping block.

Today, we take a look at the offensive tackles on the Bills’ roster.

Dawkins has been a great teammate and a steady force in the locker room since the team traded up in the second round of the 2017 NFL Draft to select him. While he hasn’t been as good as his predecessor at left tackle, Cordy Glenn, he has been something Glenn was not in his last season with the team—available. Dawkins has not missed a game in his career, and this year, he only missed one snap in a meaningful game (he sat against the New York Jets for much of the regular season finale, but that was by design). He improved this season in terms of penalties taken and sacks allowed, but the total in each category was still higher than you’d like to see in a “franchise” left tackle. He isn’t going anywhere in 2020, but with his rookie deal set to expire at the end of the season, it will be interesting to see what type of salary he commands. For a healthy left tackle who’s still quite young, Dawkins can expect to command a salary in the range of $12-$15 million per season and could sign an extension during the season.

One-half of a platoon at right tackle, Buffalo’s second-round choice acquitted himself very well at times. He was outstanding, for example, against the Denver Broncos and Von Miller, one of the league’s best pass rushers. In the playoffs against J.J. Watt and Whitney Mercilus, he held his own, although both players ended up making impact plays on the game. While some folks think he’d be better at guard, it’s pretty clear the Bills like him at tackle and he’ll get every chance to win the job outright this summer.

The veteran was half of a platoon at right tackle in his first year with the Bills, and he was clearly the better half of that platoon. Nsekhe has absurdly long arms, and his ability in pass protection far exceeded that of his rookie counterpart Ford. He suffered an ugly ankle injury against the Miami Dolphins, but he was able to return not only for the regular-season finale, but also to play in the Wild Card game against the Houston Texans. Even though the Bills could save quite a bit on the cap next year by cutting Nsekhe, who turns 35 during the 2020 season, they would be wise to allow him to finish out the contract.

Bates was acquired via trade with the Philadelphia Eagles during the 2019 preseason when the team needed tackle depth. He is easily Buffalo’s most versatile offensive lineman, as he is literally able to line up at any spot along the line. The team lists him as an “OL,” but we’re counting him among the tackles for balance purposes. He serves as a great camp body at worst next year and, at best, he’s someone who can be kept as the last offensive lineman on the 53-man roster in case of injury. He was a great find for Beane and company.

Basically all we know about Salako is already written above. He entered the league as an undrafted free agent in 2017, but he’s yet to appear in an NFL game. He’s a camp body.

Williams had a down year for the Panthers after switching to the left side of the line, which is why he came so cheap to Buffalo. He was a second-team All-Pro in 2017, though, and if he can return to form back on the right side, Buffalo might have a steal that can play right guard or right tackle. He could be the opening day starter or he could be a roster cut or anywhere in the middle.

Walton is a depth option and possible practice squad candidate for Buffalo after playing both right tackle and left tackle at FAU. He blocked for Bills RB Devin Singletary when the pair were in college together.

The two-time All-Pac-12 tackle went through a myriad of injuries in his college career and ran a very slow 40-yard dash at the Combine, resulting in his fall to UDFA status. (At one point he was talked about as having first round potential). He could be a big hit for the Bills, but he could also be off the roster in the first cut down.

The pieces are here for a solid groups at offensive tackle. Dawkins is locked in as the left tackle, but what’s going to happen at right tackle where conceivably Ford, Nsekhe, and Williams all have a shot to start.

Will Buffalo keep five offensive tackles on the roster, especially with Bates having the ability to play multiple positions? Will they give a young guy a chance? They are going to be cutting NFL-caliber offensive lineman regardless (or perhaps GM Brandon Beane can orchestrate another OL trade in late August).

Our guess following the draft was that they would keep all five; Dawkins, Ford, Nsekhe, Williams, and Bates. In a year of uncertainty, Buffalo would have certainty at this position. Then Adams would be a priority practice squad signing.