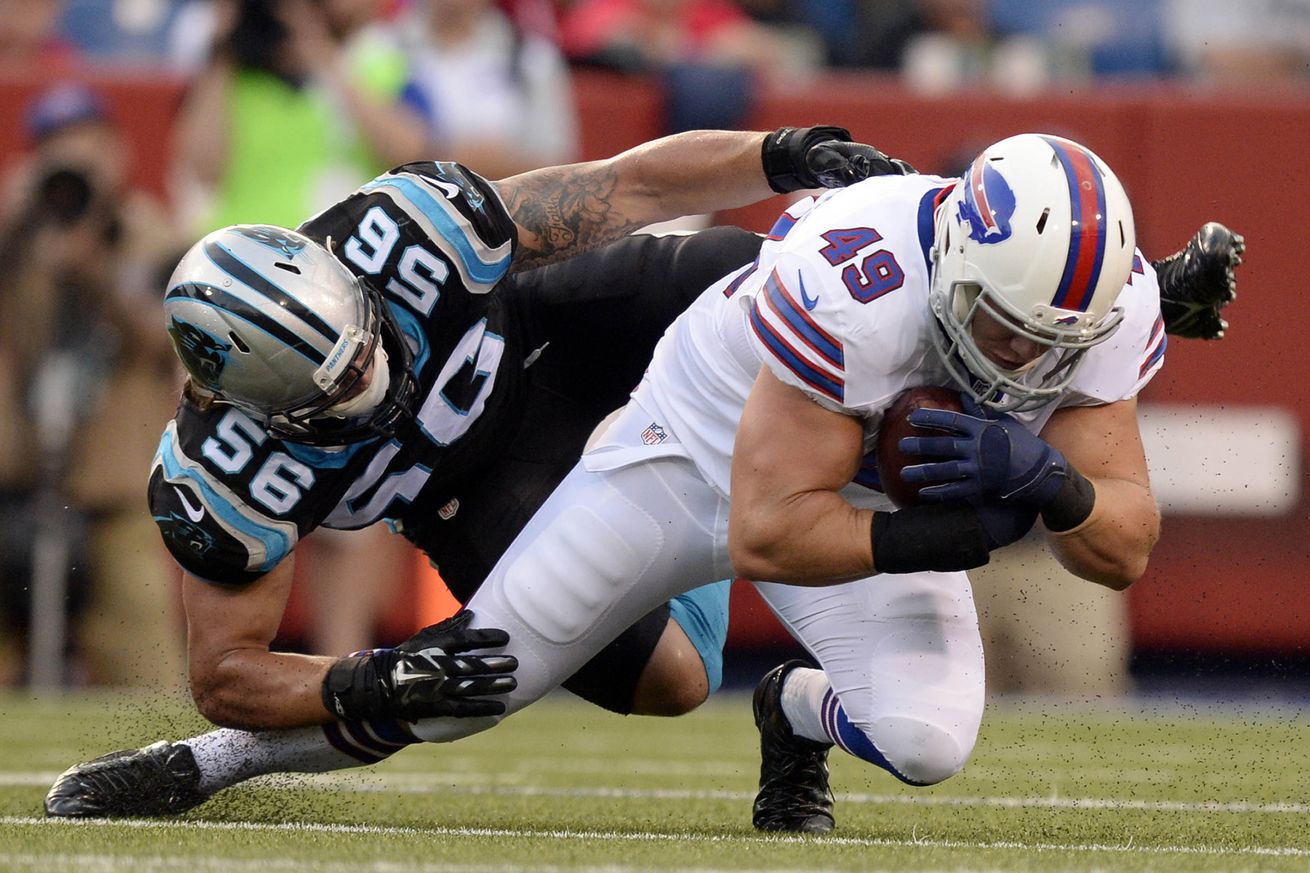 The linebacker position looks different in 2020, but not at the top two spots.

The Buffalo Bills are fortunate enough to have two of the league’s top young linebackers under contract this season. While one is a former first-round pick entering the third year of his rookie contract, the other is a former fifth-round pick who is entering the final year of his rookie deal. With the team also replacing an important veteran mentor, this is a position where the stability of the past is currently in flux.

In our continuing look at the state of the Bills’ roster, we discuss the linebackers—a young group budding with potential stars.

Edmunds has continued to develop into the stud general manager Brandon Beane and his staff thought he would be when they traded up to draft him in the first round of the 2018 NFL Draft. At only 21 years old, Edmunds is the first player in NFL history to record two seasons of at least 100 tackles prior to turning 22 years old. Yes, he sometimes misses keys in the run game, leading to overpursuit and some big runs. And yes, he sometimes hesitates to hit the hole, as well. However, his overall play and athleticism make him a true three-down linebacker, and his continued improvement bodes well for the defense overall. There has been much more good than bad with Edmunds, who is a perfect fit for the middle of head coach Sean McDermott and assistant head coach/defensive coordinator Leslie Frazier’s defense. He’s a keeper.

When he was drafted out of Boston College at No. 163 overall in 2017, many thought that he was destined to be a special-teams player and sub-package linebacker at best. However, his play has consistently exceeded his draft position, as Milano has established himself as one of the better young all-around linebackers in the NFL. He has increased his tackle total every year in the league, and he has also increased his number of pass breakups, which is indicative of his two best traits—Milano is tough enough to take on any ball carrier, and athletic enough to stick with running backs and tight ends in coverage. It would be nice to get him under contract before the season starts.

Klein is the plug-in replacement for recently retired veteran Lorenzo Alexander. Klein has experience in the defense, as he spent time with Sean McDermott in Carolina. That continuity will bode well for the COVID-19 offseason and his chances of making an immediate impact. They certainly paid him for that impact, so he needs to come in and deliver early and often.

Thompson signed with the Bills as an undrafted free agent in 2018. While he was often injured during college, he has been productive in short spurts in the NFL. As a special-teams mainstay in his two seasons on the roster, Thompson already has a role for himself. With Lorenzo Alexander retired, Thompson may even have the chance to expand his role.

Dodson had a rocky rookie season, as he spent six games serving a suspension for an arrest in May for domestic violence. In September, he pleaded guilty to misdemeanor disorderly conduct, a deal which allowed for those domestic violence charges to be dropped if Dodson successfully completed a diversion program. Buffalo waived him after his suspension (and not before), then signed him to the practice squad after he cleared waivers. He is a wild card in 2020, as he could play himself onto the roster.

The rookie entered the league in 2019 by signing with the Atlanta Falcons, but he was cut prior to the start of the season. Buffalo signed Phillips to the practice squad on October 29, where he remained for the whole year. In his final collegiate year at Illinois, Phillips had 95 tackles, 6 tackles for loss, 4 interceptions, and 1.5 sacks. The 6’2”, 230-lb linebacker will have the chance to compete for a roster spot next year.

The “worst” 2019 draft choice by default was Joseph, as he was unable to play in the regular season. Joseph went on injured reserve in September with a shoulder injury, effectively making his first NFL season a redshirt year. Joseph has incredible athleticism and a solid college resume, as he was a productive player at Florida. He can instantly slide in to replace some of Buffalo’s departed special teams contributors, and he may even contribute on defense, as well.

At nearly 80% of Pittsburgh’s special teams snaps and just 2% of their defensive snaps, you can clearly see the role Matakevich carved out with the Steelers. He’s here to replace Lorenzo Alexander on special teams, but says he’s looking for a role on defense, too. That remains to be seen.

The Bills spent heavily at the position to replace the loss of Alexander. Now the only conversation is which depth linebackers will stick, which will be shuttled to the practice squad, and which will end up on the call-back list.

Edmunds and Milano are locked in at the starting duo playing three downs while Klein will look to play in run fits. Beyond that, it’s anyone’s guess as a confluence of young talent will meet special teams prowess in a jostle for a spot on the 53-man roster as well as the game-day active roster.