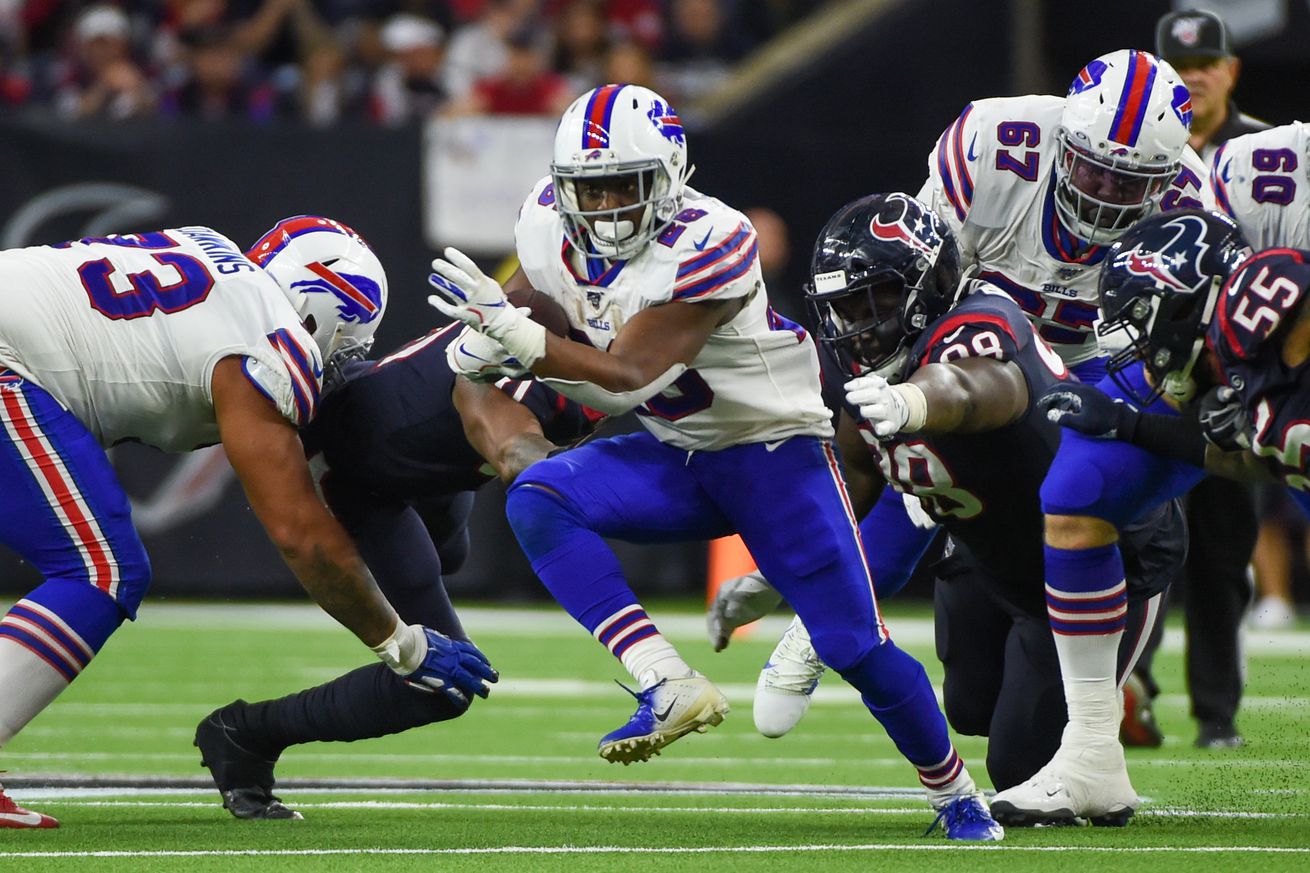 The Buffalo Bills entered 2019 with a solid pecking order at running back. They had two established veterans, LeSean McCoy and Frank Gore, who were set to absorb most of the carries. They had a young veteran free agent in T.J. Yeldon as insurance, and they also had a rookie, Devin Singletary, drafted in the third round to compete for time.

We all know how that turned out for the Bills. McCoy was released prior to the start of the regular season. Gore began the year by taking the lion’s share of the carries, but by the season’s halfway point, it was Singletary who dominated snaps and touches out of the offensive backfield.

With new additions this offseason, the Bills look even more fortified at running back for the next several years. Let’s dive into the position group.

In Singletary’s first season, the rookie showed that he is an electric presence each time he touches the ball. While he lacks the long-range speed necessary to score from anywhere on the field, he is always a threat to break a big play, as his short-area quickness and elusiveness are elite. In his first four games, Singletary only had 20 rushing attempts, but he ran for 172 yards—an absurd 8.6-yards-per-carry average. He also had nine receptions for 58 yards. Part of this lack of usage was due to a hamstring injury suffered in Week 2, but he also wasn’t a focus of the offensive game plan. That changed in the season’s second half, as Singletary averaged 19 touches per game. He was still so effective with those touches that most fans wanted to see him handle the ball more, as it was clear that Singletary was, at worst, the second-best playmaker on the offense. Singletary’s rookie year was solid overall, and we should all be excited about what the future holds for him.

Moss was drafted in the third round to be the complement to Singletary. A tough running who doesn’t like to let off defenders easily, Moss loves finishing runs. Hopefully, he’s going to be the back they hoped they were getting in Frank Gore last year. While he dealt with some injuries at Utah, platooning him with Singletary should keep both backs fresh.

Yeldon was inactive for most of the 2019 season, but he also had a brief run as a receiving back when Singletary was injured. In those same three weeks where Gore shined, Yeldon carried ten times for 45 yards and made ten catches for 100 yards. He also lost a fumble. He showed himself to be a solid option out of the backfield for quarterback Josh Allen, and his speed and ability to turn the edge is something that the Bills’ offense lacked this year. His situation will be an interesting one, as it’s equally likely that the Bills part ways with the Alabama product as it is that they allow him to finish his contract with the team.

Jones is replacing the departed Senorise Perry as the special teams running back role, but Jones provides a little more in the way of offense. Jones is partly responsible for the Texans’ win over the Bills in the Wild Card round, as he moved Houston into field goal range with a long catch and run in overtime. Yes, Jones was a member of the Bills for two years before joining Houston and during that time he had zero carries and one reception, but played a ton on special teams.

DiMarco is a great teammate and a strong lead blocker. He also is a valuable member of the special-teams unit. We can debate what his role is and whether said role is deserving of his salary, but he’s a “process” player and it would take a bad preseason and camp for him to get cut.

The preseason fan favorite spent his first NFL season as the 11th man on Buffalo’s ten-man practice squad—a designation meant to keep the International Pathway Program player in an environment where he could continue to learn the game. Wade showed incredible speed in the preseason, but he obviously has a long way to go in learning the NFL game. He’s a lottery ticket, and if he picks up enough about the game, Buffalo could cash in as early as this season, but it’s way more likely he has another year on the practice squad.

One of two undrafted free agents on our list, Williams is an intriguing option at the running back position who could come in and make waves. The former Ohio State Buckeye transferred to North Carolina and has a lot more experience playing football than Wade.

Gilliam in the UDFA making a play for Patrick DiMarco’s job. He played a ton of special teams at Toledo and could easily step into a similar role for the Bills. With DiMarco’s snaps eroding during the 2019 season and not likely returning, saving more than a million bucks in cash and cap space might make sense for the BIlls if he shows he can belong on an NFL field. He’s a UDFA to watch.

The Bills added a dynamic complement to Singletary this offseason and revamped the depth all at the same time. Iron sharpens iron, and there are players to push the guys at the top of the roster as well as each other fighting for special teams roles and depth spots.

With the learning curve usually pretty low at running back, will Singletary and Moss be a 50-50 split from the start or will the young veteran get more of the carries to start? Will it be a true “hot hand” situation or will it be based on snaps or down/distance? The platoon is very intriguing to watch.

Beyond the top two players, the fight at the depth spots is worth watching. Yeldon has experience but no one is beholden to him, so Williams has a chance. Similarly, DiMarco could be on the way out at fullback with a strong preseason from Gilliam. If there is a preseason.

At the very worst, the Bills have continuity on their side in several spots and can ease in Moss as a complementary piece.