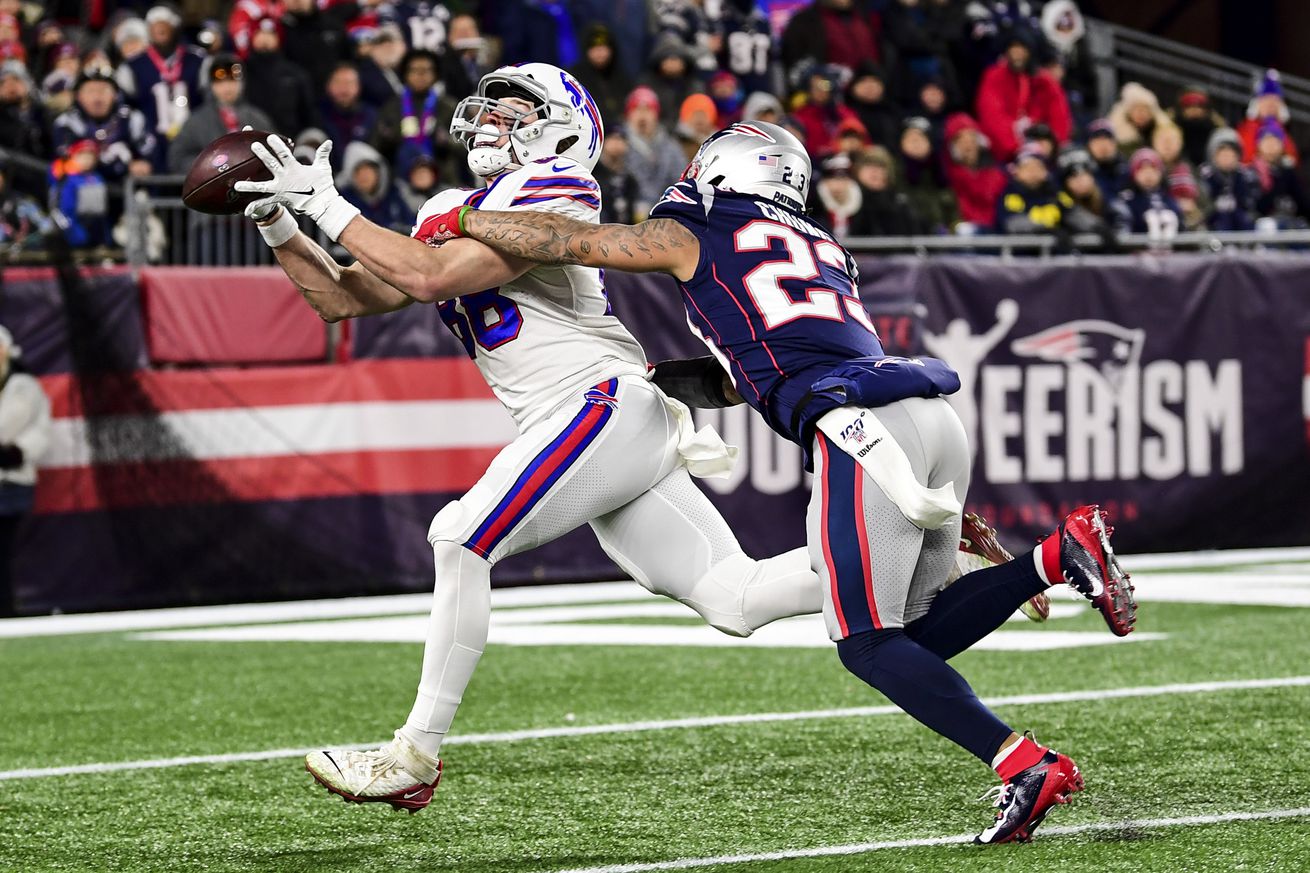 The Bills have some young players with big potential here

In an attempt to add weapons for second-year quarterback Josh Allen, the Buffalo Bills overhauled their tight end position entirely in 2019. Buffalo released Charles Clay, who had signed a big contract prior to the 2015 season. They drafted two players and signed two more, as not one person who played tight end for Buffalo in 2018 did so in 2019.

This offseason, they did the complete opposite as they didn’t add a single new player. Sure, they flirted with veteran Greg Olsen, who ended up signing with the Seattle Seahawks, but they obviously didn’t throw a ton of money or promises his way to get him to show up.

In our initial look at the Bills’ position groups heading into training camp, we profile the tight ends—a group where people think they know what will happen, but one with plenty of intrigue.

Signing Kroft came with some big-time risk, and that risk was realized almost immediately for Buffalo. After missing much of the 2018 season with a broken bone in his foot, Kroft had the exact same injury occur on his first practice of 2019 OTAs with Buffalo. Then, when the big veteran was set to return from the injury in September, he injured his ankle, delaying his Bills debut even more. Kroft finally played in his first game on October 20 against the Miami Dolphins. He caught his first pass a week later against the Philadelphia Eagles, and he caught his lone touchdown of the season on Sunday Night Football to put the Bills ahead for good against the Pittsburgh Steelers. To call his first season in Buffalo disappointing would be an understatement. In March he restructured his contract, virtually ensuring he’ll be in Buffalo in 2020. His salary became fully guaranteed, but it was reduced by $1 million, and the third year of his contract was voided, making 2020 the final year of his deal.

The veteran blocking specialist returned to Buffalo for his second tour of duty, and he was a familiar face on the Bills’ heavy packages throughout 2019. The frequency with which offensive coordinator Brian Daboll called for those packages dwindled as the year progressed, however, leaving Smith an underutilized player who struggled to keep out of Skarekrow’s penalty harm articles. Smith had eight accepted penalties against him this year, most in the league, for a total of 51 yards. We took a deep dive into how the Bills used Smith in 2019, and it’s a compelling case for keeping him around as the sixth OL. Still, hard decisions will be made around roster cutdowns and this vocal leader on the offense and media darling could be on the outside looking in.

One of two rookies Buffalo selected in the third round to bolster the offense, Knox showed flashes of immense potential in his first year in the NFL. His athleticism is ridiculous, as is his stiff arm, which he used so effectively that he earned the nickname “Rambo.” He earned the starting gig after Kroft was injured, and he performed so well that he remained the starter even after the veteran returned from injury. Knox scored two more touchdowns this season than he did in his entire collegiate career, as he was overshadowed at Ole Miss by other NFL-worthy receivers like A.J. Brown and DK Metcalf. While he had issues with drops (Knox led all NFL tight ends with six this year), he is a potential breakout stud for the 2020 season.

A seventh-round draft choice out of Boston College, Sweeney had an impressive preseason and, thanks to the injury to Kroft, he was on the active roster for the first six games of the season. He was inconsistent, which isn’t a surprise given his draft status; however, he showed up well enough that the team should give him the chance to make the roster, even if his role as the inactive-on-game-day-player is the same next year as he grows into a potential replacement for Smith.

A Lee Smith clone, Becker is a big-bodied blocking specialist who did little to distinguish himself during training camp and the preseason. He was on Buffalo’s practice squad all year—something that could very well happen again in 2020.

Croom is the proverbial ace in the hole here, as the Bills were able to stash the wide receiver-turned tight end on injured reserve thanks to a hamstring injury suffered during the first week of OTAs. A stellar athlete, Croom emerged as a good target during the 2018 season, hauling in 22 passes for 259 yards and a touchdown. He gives the Bills a solid athletic option who could help stretch the middle of the field along with Knox. Can he do enough to distinguish himself during a weird training camp?

It looks like a lot of status quo here, but there is some intrigue. Knox is a lock to make the roster and Kroft’s contract makes it pretty likely he’s going to stick, as well. (A team could theoretically trade for his guaranteed-money contract if Buffalo really wants to get rid of him.)

After those two is where the intrigue really exists. Do the Bills value the sixth OL enough to keep Smith on the roster over a younger player at a position where depth is more necessary? Probably, but it’s at least a question worth asking as they open up the playbook with Stefon Diggs.

Did Tommy Sweeney do enough in 2019 to stick in 2020 over a healthy Croom? The Bills don’t owe either of those guys anything at this point so it should be a straight competition.

Can Becker do enough to show that Smith is extraneous? It’s not likely, but he could still be working on developing his role for the future.

In the April roster projection, we had the Bills staying status quo with Knox, Smith, Sweeney, and Kroft while cutting Becker and Croom. The COVID-19 shutdown has something to do with that by keeping familiarity, but all six players were on the team a year ago so it’s less of an issue at tight end. This is a position where we could see the Bills play some roster games in 2020. The group that makes the initial 53-man roster might not be the same group that plays in all the games this year, as they churn the roster due to opponent, injuries, and other factors. Guys like becker, Sweeney, and Croom could be on the roster one week and off the roster the next week if there is a need at another position or they want a different style of tight end for that week’s opponent.