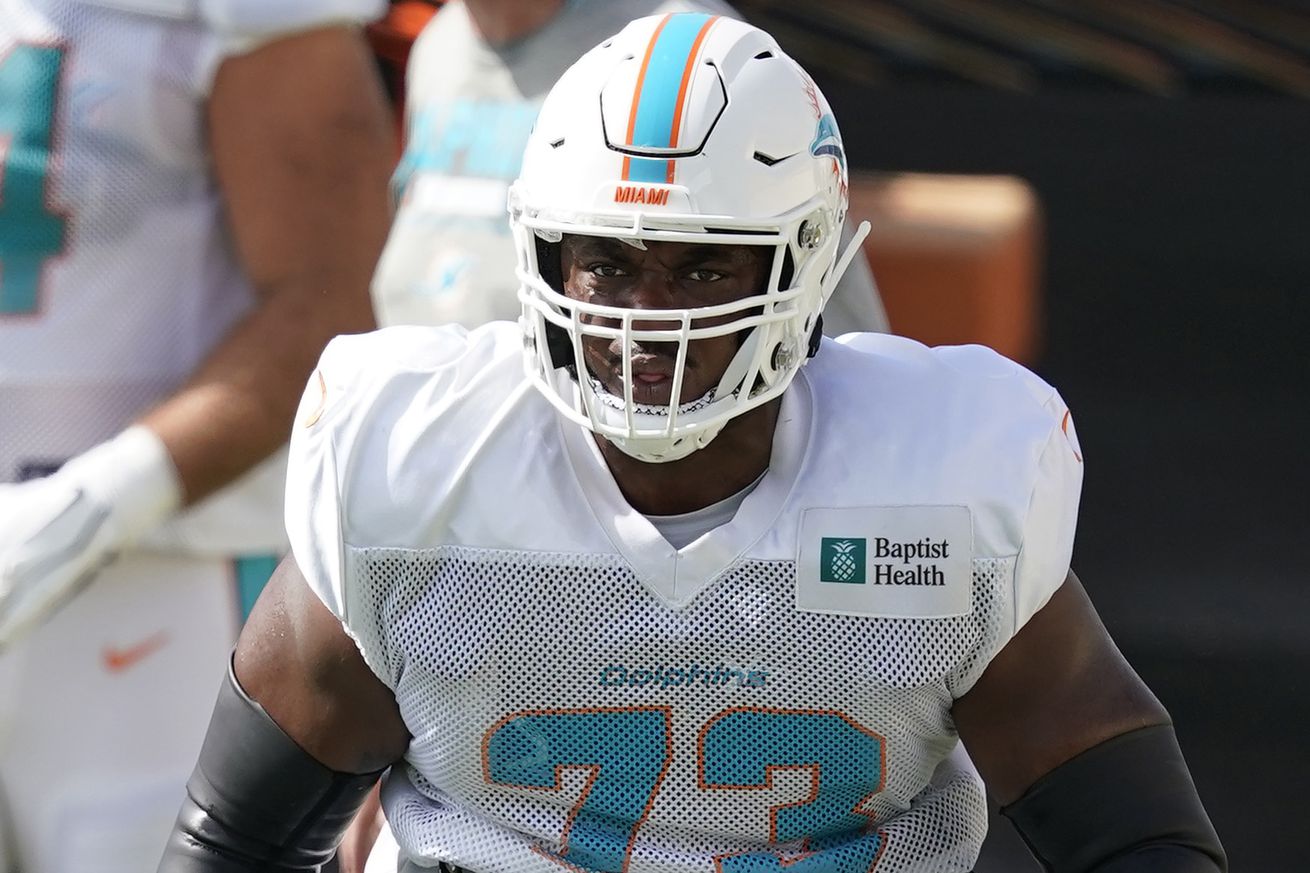 It’s only one game, but let’s see what the rookie holding down the blind side looks like.

If it hasn’t become apparent yet, I love the defensive side of football. Certainly, head coach Sean McDermott and defensive coordinator/assistant head coach Leslie Frazier have given me a lot to be happy about. With that out of the way, what’s the reaction when you tell me there’s a rookie left tackle who hasn’t had a preseason and is about to start his second NFL game against the Buffalo defense? Well, he becomes the highlight of my opponent preview of course. Let’s take a look at Austin Jackson and see if we can take a guess how he’ll do against Jerry Hughes and Mario Addison.

Let’s start off with a good microcosm of Austin Jackson. There’s some good and some less good. The initial impact goes well due to Jackson being braced well and trying to get underneath Shilique Calhoun. Maintaining a block can be just as important as starting one and Jackson gets upright and is shoved back, allowing Calhoun to get back into the play.

As you might have expected, the Miami Dolphins did float help over to Jackson’s side a decent amount. Typically speaking, with just a little assistance Jackson acquitted himself well.

I honestly think Austin Jackson just blanked on this move. Calhoun slows before a bigger impact and is nearly gentle in how he engages Jackson. The variety and often subtlety of NFL defenders looked like it might have been a shock to Jackson as he was beat by some pretty low-key moves like this one.

Jackson flashed some potential and this was a rep I liked quite a bit. “Holding” is a bit of a misnomer as it suggests “grabbing” is not allowed, which is not the case. Whatever side a defender presents, a lineman can place his hands and hold on. Jackson is presented with Deatrich Wise Jr.’s shoulder/side, which allows him to place his hands on Wise’s chest and back. This helps Jackson remain in control of his own body by giving him a stable support. His feet slide well and take him on a path that keeps Ryan Fitzpatrick clean.

This is not a textbook stance and Jackson is a bit more vertical in his upper body than you’d like to see as he takes a shot. However, it’s not terrible either. To me it feels like we’re watching a “Welcome to the NFL” moment on repeat. Chase Winovich is one of the smaller defenders Jackson was asked to ward off but with a little head of steam Jackson gets rocked. He reaches out and this could be a face mask. Jackson can’t maintain contact though, and Winovich gets back into the play.

On this play, Winovich hits Jackson while Jackson is “floating.” Neither foot is planted and despite about 70 lbs difference the defender will always have an advantage when this happens. Winovich follows up with a rip move, which had pretty good effectiveness against Jackson all day. And there’s no question this was a face mask. By the way, those aren’t pointed out because I think Jackson is a dirty player. To me it looks like Jackson reaches out due to desperation and is less precise with his hands. A lot of the time a blind reach can lead to problems.

Ending on a high note, the best reps I saw came when Jackson was facing a slower, power-based move. The extra split second to brace himself helped ensure Jackson got set. Furthermore, these straight ahead attacks allowed him to keep his shoulders square and demonstrate some pretty good power. On this play, he gets the right hand on Derek Rivers’s shoulder and Jackson controls the play all the way from there.

In a year with no preseason and limited time to practice there really shouldn’t be an expectation of anything other than what we see above. So when it comes to my words I’ll be fair and say that there’s a lot of potential in Jackson that he showed flashes of in his debut.

Now then. When it comes to the football field, Jerry Hughes, Mario Addison, and the Buffalo Bills’ defense only has to be fair in the sense of not drawing flags or cheating. Will the Bills look to overwhelm Jackson with some faster players around the edge? Will they unleash Hughes and allow him to finesse his way around? Will Mario Addison look to take advantage of Jackson’s tendency to let his shoulders get turned? If the Bills are looking to maintain an aggressive defense like they did in Week 1, it’s a safe bet they’ll toss an entire bag of tricks at the rookie.