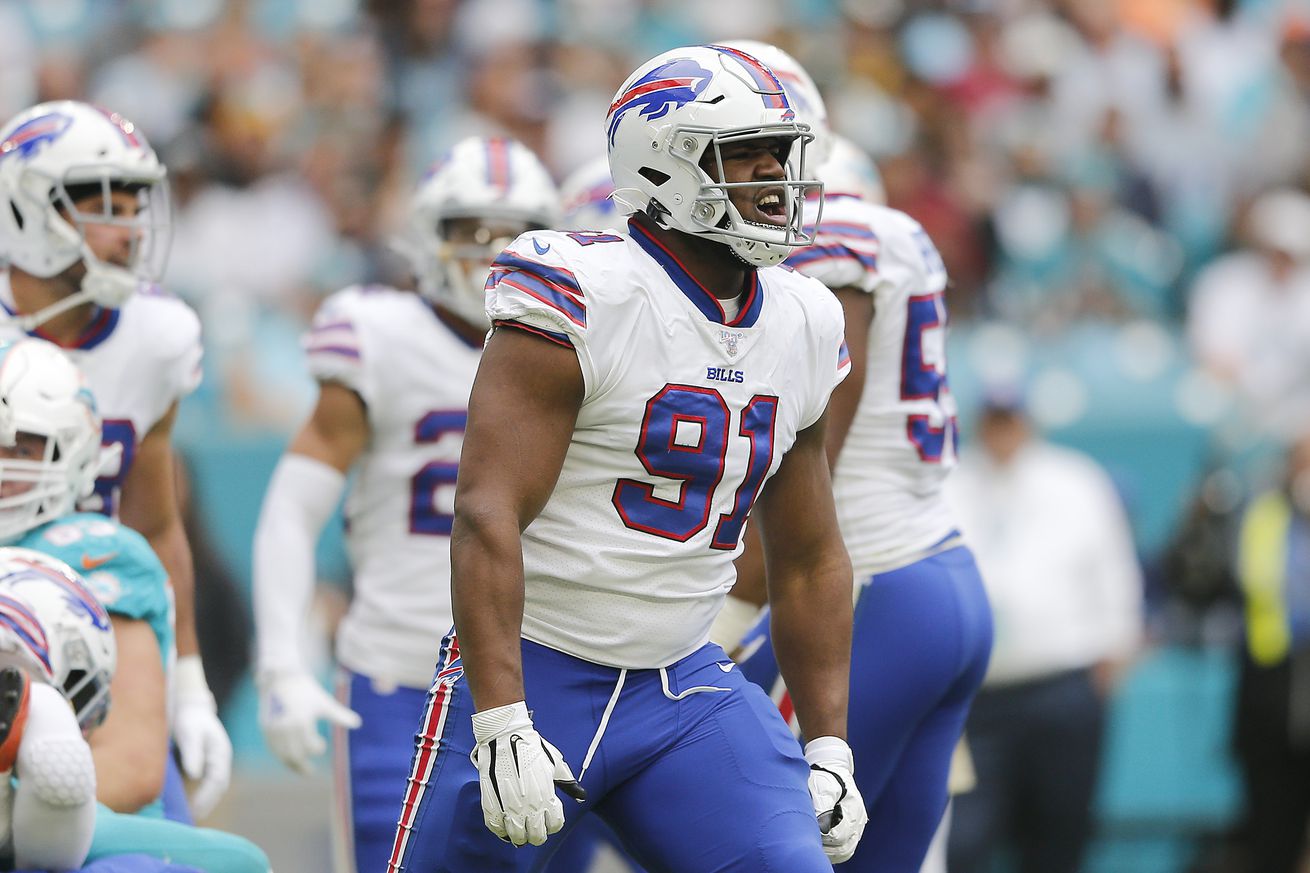 Are there any concerns prior to the start of the regular season?

The football pads are back on! After months of uncertainty whether this would happen, padded practices resumed Monday August 17th to the delight of the fan base.

Unfortunately, but expected, there are already injuries from the 21-day ramp up period that was agreed upon prior to padded practices. Today’s article will dive deep into each Buffalo Bills player’s ailments & potential timelines for return.

TE Tommy Sweeney (foot)
Little continues to be known regarding Sweeney’s foot injury that placed him on the PUP list to start the season. There were unconfirmed reports that he broke his left foot which would fit the timeline now of why he is still not cleared. As it isn’t known when he suffered the foot injury, hard to say when he’ll practice. He cannot practice until he is cleared which means this is just a waiting game.

Injured but on roster

OG Jon Feliciano (right pectoral tear)
Feliciano continues to rehabilitate back from a right pectoral tear suffered in the early days of training camp. He continues to recover and work his way through the rehab. Feliciano expects to be back for the Las Vegas Raiders game, but I see a more realistic return around Week 7 or 8. Once cut down day occurs, he will make the roster and then should be immediately placed on IR to save a roster spot. He can be activated within three weeks due to the COVID-19 changes to the CBA instead of the usual eight which means he can come back when he’s ready. To read more on the specifics of the injury, check out this article.

WR Isaiah Hodgins (undisclosed)
The rookie wideout was a surprise addition to this list having no known injuries up to this point. He also did not appear to be coming off anything surgical from his time at Oregon State. Considering he was able to shed the jersey for Wednesday’s practice, it may have been more precautionary, but hopefully this is now behind him.

LB VoSean Joseph (undisclosed)
Similar to Hodgins, Joseph was seen in a red non-contact jersey. There isn’t anything publicly known why he would have this designation. He was coming off a torn left shoulder labrum that forced him to spend his first season on IR. But he shouldn’t be having any issues from that surgery by this point in time. There’s a slight possibility that he and Hodgins are working through a concussion and in Stage 5, but I believe the team would be more forthright with that due to the heightened awareness placed on concussions. Nevertheless, he got rid of the jersey for Thursday’s practice and was able to participate fully.

CB Levi Wallace (sore back), DT Ed Oliver, (sore hip), and FB Patrick DiMarco (sore neck)
All three players are dealing with soreness in their respective areas. Wallace and Oliver were dealing with soreness on the first day with Wallace returning to practice Tuesday. Oliver returned to practice Friday in a limited role, and DiMarco missed the rest of the week following Monday’s practice.

There weren’t any previously known issues for Wallace regarding his back and may be a result of lifting and conditioning. Oliver may be in the same boat with his hip soreness and his recent core muscle repair should have no bearing on his soreness now as there has been enough time in between the surgery and now. In addition, the outcomes continue to be excellent for core muscle repair in returning to play in the NFL.

DiMarco dealing with soreness in his neck following Monday’s practice was likely the result of hitting each other and shaking off the rust. There is virtually no further information regarding the injury at this time. This will be interesting to watch to see whether he returns next week or if he will continue to yield his reps to rookie UDFA FB Reggie Gilliam.

WR Gabriel Davis (leg contusion)
Davis missed Tuesday’s practice with a leg contusion likely sustained in Monday’s practice as the result of the contact. It’s not known which leg is hurting but it’s serious enough to have him sit out. These injuries typically do not linger and is more of a bruise than anything else. He was able to return to practice following having Wednesday off and was quite productive according to reports.

Play of the day was a 67yd touchdown from Davis Webb to Gabe Davis, who caught a slant on Tre White and won a foot race down the field.

WR Robert Foster (concussion)
Training camp is not starting off well for Foster, already in the concussion protocol following Monday’s practice. Each player has to work through the five-stage concussion protocol before they are able to return to full practice. He possibly suffered this injury Monday on this hit by CB Josh Norman, though it’s not confirmed.

Foster has not been reported as being on the sidelines since Monday’s practice which indicates that he is in either Stage 1 or 2 of the concussion protocol. This means that he is either resting in the attempt to return to baseline or performing light aerobic activities within the facility. As each concussion is different, impossible to say when he will return. He is one player that absolutely cannot afford to miss any more reps in order to make this team.

OT Ty Nsekhe (unknown)
Nsekhe returned to practice following Monday’s practice with an unknown ailment that wasn’t even reported. It’s possible that the team is working on limiting his reps to keep him fresh for the season. He is coming off the gruesome ankle injury last season, but he should be fully rehabbed from that injury. He will be a name to watch as cut down day approaches.

DE/DT Quinton Jefferson (foot soreness)
Jefferson was added to the injury report and missed practice Wednesday with what the team termed as “foot soreness”. This could be possibly related to his Jones fracture following the 2019 playoffs which resulted in surgical repair.

It’s common to have soreness following this procedure and some complications such as a re-fracture or screw irritation. Hopefully this is more precautionary and this does not become a chronic issue throughout the season. He was able to return to practice on Thursday without any further complaints.

To read more on Jefferson’s foot and overall injury history, check out the article here.

CB Josh Norman (left hamstring)
Norman suffered an injury while intercepting QB Josh Allen on Thursday. He was able to run it back several yards before getting tackled by WR Stefon Diggs. He came up limping, was assessed by trainers but never left the field.

Screenshot of the article by @MattParrino, go read now if you haven’t already.

Does an excellent job at describing injury. Left side, got rolled up on. If rolled on from outside, worry for MCL or high ankle. If rolled up on inside, thinking lateral low ankle sprain. #Bills pic.twitter.com/hI3pAiBfd1

According to NYUP.com’s Matt Parrino, he was observed riding an exercise bike later on which indicates that it may not have been severe. Reports prior to Friday’s practice indicated that he suffered a left hamstring strain that required further testing. Training staff were likely getting an MRI to determine the severity and determine a timeline for recovery.

Defensive backs are at a much higher risk for hamstring strains with numbers showing 23% of hamstring injuries are suffered by defensive backs and an overall 33% recurrence rate based on studies. The highest rate for recurrence following the original injury is anywhere from 2-4 weeks with the possibility of re-injury for up to 12 months following the original injury. Until there is further information, he is out indefinitely.

There is a decent chance that he will be back for Week 1 as the match up against the Jets is over 3 weeks away which falls in that sweet spot between possibly being fully healed and higher risk for re-injury. Under Sean McDermott, the training staff has been notoriously conservative when dealing with hamstring strains. This will be a week-to-week approach to see whether he is ready for the season opener.

This was followed by White coming up limping but did not require assist from training staff or the need to miss reps. I personally don’t see anything that would have caused injury however, the camera does pan away which makes a true assessment difficult. In Matt Parrino’s and Ryan Talbot’s podcast, they clarified further saying that he may have done something to his foot. However, he did not miss Friday’s practice which may indicate that this may be a non-issue.

LB AJ Klein (ankle)
Klein missed Friday’s practice with an ankle injury. Little detail was given on the specifics of the injury besides NYup.com’s Matt Parrino detailing how he came up limping on Thursday on their podcast. He did not elaborate when he was limping whether it was during a drill or live action. This would explain the ankle injury but not the exact cause which makes determining a return to practice impossible. This will be something to continue to monitor.

LB Tremaine Edmunds (hip)
Edmunds is a player who rarely shows up on the injury report. He missed Friday’s practice with a hip injury but further specifics were not given. This will also be something to monitor with hopefully more information available in the coming days.

The sky is not falling. THESE INJURIES WERE EXPECTED! A lot of strains, sprains, soreness, contusions are all part of the acclimation period. It seems like a lot only because I go into great detail to assess every injury. We saw last year how the team glossed over the injuries of OG Jon Feliciano and DE Jerry Hughes. Both suffered injuries early in camp that eventually required surgery which hampered their performance and it’s important to note any issues now in order to create a timeline if things reoccur.

Next week should see a return to practice for most of these players with several added to the injury report. The Bills have avoided major injury for the most part and will hopefully continue to do so as they march towards their Week 1 match-up against the Jets to kick off the 2020 season.