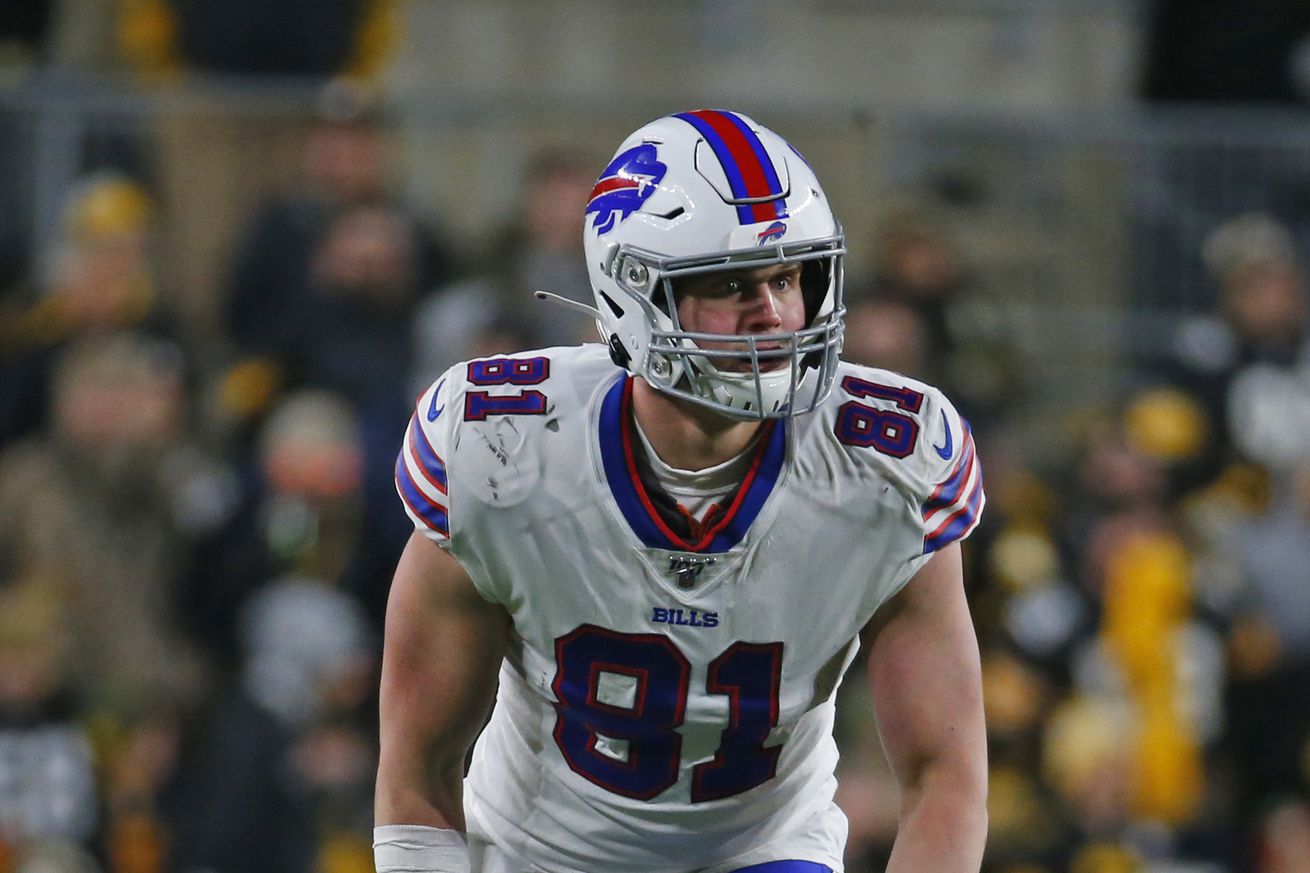 The injuries are growing, should we be concerned?

Training camp has wrapped up and the Buffalo Bills officially begin the march towards the postseason. Regrettably, there are several key players dealing with injuries with the report growing by the day. Acclimation injuries were expected but some of these are becoming worrisome with Week 1 merely two weeks away. Below are detailed updates of each current injury following Sunday’s practice.

TE Tommy Sweeney (foot)
New information is lacking since the Bills placed Sweeney on the PUP list to start preseason. It’s highly unlikely at this point he is activated and placed on the active roster only to then be placed on IR to start the season. The rules aren’t clear whether that’s possible but to clear the physical and then go to IR seems fishy. I’d expect him to start on regular season PUP, not being activated for the first 6 weeks and then have a 21-day window for the team to activate him. Any other scenario hurts Sweeney’s chances at making the roster.

G Jon Feliciano (left pectoral tear)
Feliciano continues to work back from his pectoral tear suffered days into training camp. He is on schedule with reports stating that he is out of his sling. From a PT perspective, I still think it’s a stretch that he suits up Week 4 against the Raiders.

Was just scanning my notes from yesterday and forgot to mention that I saw Jon Feliciano was no longer wearing a sling.

A positive sign in right direction as Feliciano rehabs from torn pec.#BillsCamp

He is a great candidate to make the roster and then move to regular season IR to have a 3-week stay. He then can have a 21-day window to get activated while having a roster exemption so he doesn’t take up a spot. The team doesn’t have to activate him after 3 weeks though which means he could stay on until he’s almost ready and then start his window just prior to him being fully activated. Expect him to be back mid season.

FB Patrick DiMarco (neck)
Following the first day of training camp, DiMarco has been since dealing with a neck injury. It was initially termed neck soreness but two weeks out of practice says something else is going on. He could have suffered a generalized neck sprain or he could have a bulging disc in his neck leading to radiculopathy in his upper back or down his arm. He could be dealing with a whiplash type injury. This could be a condition that we are simply not privy to that he has been dealing with quietly.

While he is a veteran and captain, he still stands to make the roster. Losing all his reps to FB Reggie Gilliam hasn’t helped things but until we see DiMarco back on the field with any sort of participation, it’s only a guess as to what he’s dealing with and when he will return. He could go to IR to start the season as well, but too early to tell.

G Quinton Spain (foot)
Spain was a new addition to the injury report following Thursday’s scrimmage with a foot injury. Which side and how he injured it is not known. He did deal with foot soreness early in training camp last year that limited him briefly. His injury history does not suggest this has become a chronic issue.

He may have simply had it stepped on and needs a few days to recover, similar to his ankle contusion last year in the preseason when he was kicked/stepped on by Frank Gore. Without more information to negatively sway my thoughts, I don’t anticipate this to be a long term issue.

RB Taiwan Jones (right knee)
Jones suffered a knee injury early in practice last week that has held him out the remainder of training camp. It is now known that he is dealing with a right knee injury due to reports from WGR’s Sal Capaccio. Jones was observed on the stationary bike with a wrap on his right knee.

Patrick DiMarco did not practice once again. We have not seen him on the field since the media has been out here starting on August 17.

Taiwan Jones did not practice, but I saw him working on the stationary bike with his right knee wrapped.

This leads me to believe that he is still dealing with a MCL sprain as reports initially stated that he stepped awkwardly which could fit the mechanism. I also have thoughts that he could have suffered a small meniscal tear that the team is trying to address non-surgically. If it’s either condition, he still has an excellent shot to not only make the roster but be active Week 1 as he could rehab from both issues in time. I am hoping that it is more MCL which means he will be closer to 100% to start the regular season.

CB Josh Norman (left hamstring)
Norman is nearly a week and a half out from his hamstring injury sustained as the result of getting tackled following picking off Josh Allen in practice. He has been observed on the stationary bike and performing high-stepping drills off to the side. While that is promising, he still isn’t close to being ready to play. He will need to be observed going through running and team drills first before I could consider him to be ready to play.

He looks to be moving well. Hard to see which side he pushes off of first, looks like R but not necessarily indicative of issues still with L hamstring.

Fortunately, he still has two weeks and he is on track to potentially play. His rehab is following the path that many others with hamstrings have followed in their return to the field under the guidance from the Bills training staff. I am optimistic that he can suit up Week 1, but if he doesn’t, he should be ready for Week 2 barring setbacks. Once he gets outside the re-injury window which is 2-4 weeks, then he can return fully knowing that he can play without hesitation.

TE Tyler Kroft (foot)
Kroft is out from Monday’s practice due to having his foot stepped on during practice Sunday. It’s not known which side was stepped on as Sean McDermott did not elaborate. He took the same stance when Harrison Phillips tore his ACL last year which has me believe that it was the same foot, that being the right.

Tyler Kroft out today after he had foot stepped on yesterday. McD didn’t specify if it’s same one Kroft has had issues with in past. #Bills

He’s more likely dealing with pain more than anything which makes it difficult for him to return quickly. The previous foot and ankle injuries last year would not contribute to this injury; simply bad luck. The big concern is if he broke the foot again, but too soon to tell.

DT Vernon Butler (hamstring), OT Victor Salako (back)
Both appeared on the injury report Monday with their respective injuries possibly sustained from Sunday’s practice. Outside of the designations, can’t elaborate on these further.

Butler is a near lock to make the team and can rehab appropriately. For Salako, this back injury if it lingers for more than 2-3 days likely sinks his chances at making the roster.

WR Stefon Diggs (back soreness)
Diggs was held out of Thursday’s scrimmage with a sore back and once again Sunday. He was observed Thursday throwing the football around with a stiff approach, throwing more with his arm than his body. Sunday saw him walking around appearing less guarded though still not participating in team drills. It isn’t known how he injured the back, but soreness isn’t all that surprising.

Pretty evident that back is bothering him. No trunk rotation during throws, throwing more sidearm. I’m sure the back is sore, hard to say what he specifically did but wouldn’t be surprised if this keeps him out a few days. #Bills https://t.co/E9pXplE1Bz

Stefon Diggs sat out the scrimmage Wednesday with a back issue. Did not think it was a concern.
Diggs still being out today does make it a concern.
No reason to worry about week 1 just yet.

He was out at practice today. Seemingly in no discomfort. #Bills pic.twitter.com/UA8L5kO4Oz

Fortunately he returned to practice Monday in full with the hopes that he no longer is dealing with these issues.

RB Christian Wade (quadriceps)
Wade continues to work back from a quadriceps strain last week and was not listed among those injured for Monday’s practice. He continues to be a long shot to make the roster and he has the practice squad exemption, he should end up there again this season as he continues to adjust to the NFL.

DE Bryan Cox Jr. (knee)
Cox Jr. shows up the first time on the injury report with a knee injury likely sustained in Thursday’s scrimmage. The fact that he was limited is a good sign in that it’s not likely serious. He returned to practice Monday without restrictions.

LB Corey Thompson (knee)
Thompson continues to deal with knee soreness from last week and that’s as far as we know. Could be a contusion, could be a tendinitis beginning to set in, could just be precautionary. From what’s been reported, he’s expected to be a depth option at linebacker and core special teams player. He too returned to practice Monday.

RB Zack Moss (neck)
Moss was spotted in a red non-contact jersey Sunday but was still able to participate in most drills. The neck injury that he suffered likely came from Thursday’s scrimmage, possibly even when he made S Dean Marlowe make a business decision when he bowled him on an 11-yard play. He could be dealing with just generalized soreness due to the live action reps or he may have strained some muscles leading to stiffness in the area.

He continued to practice with the red non-contact jersey Monday.

WR John Brown/DL Quinton Jefferson (illness)
Both have been ruled out of Monday’s practice. The Bills have stated they do not believe this to be related to COVID.

A significant chunk of these injuries continue to appear to be part of acclimation including the soft tissue variety. Some are unlucky and a few are concerning. The Bills have some decisions to make come Friday and several of these injuries won’t help. We will continue to monitor each and every injury as cut down day approaches.