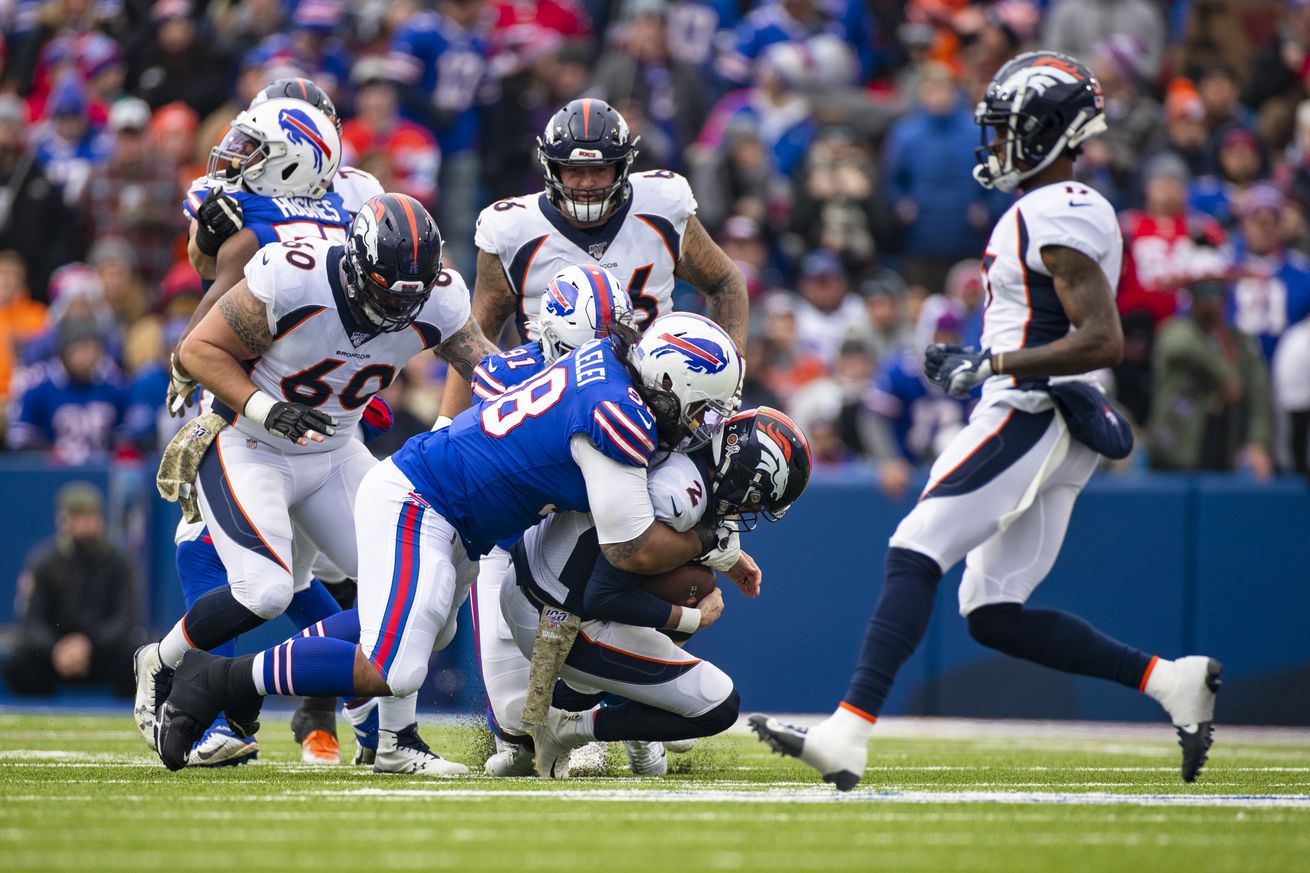 The Bills and Broncos face off in a late-season contest

In today’s installment, we take a look at the Denver Broncos with some help from Mile High Report.

Notable free agency additions: Graham Glasgow. I wanted to put Jurrell Casey in here, but the Broncos acquired him via trade. Glasgow was an actual free agent addition. Getting Glasgow really helped Denver keep their options open during the draft by not being pigeon holed into drafting a guard or a center. Since Glasgow could perform at both positions well, they were able to take the best player available regardless of position. That ended up being LSU center Lloyd Cushenberry in the third round.

Over/under 10 wins? Even. I’d take the over if I didn’t feel like the Broncos faced a tougher schedule than most teams. 10 wins is a realistic target for this up and coming roster. Denver is a young football team and sometimes those types of teams need a season together to figure things out.

Rookie I’m most excited about: Jerry Jeudy. I’ve never seen a guy coming out of college with the kind of route running Jeudy has. He’ll be a guy who could make the transition to the NFL very quickly.

Best position battle heading into training camp: Cornerback #2. It looks like Bryce Callahan will be a full go after missing all of last season with a foot injury. If he is, then that will lock down the Broncos slot corner position with the departure of Chris Harris Jr to the Chargers. Outside is where things get interesting. A.J. Bouye will take the #1 spot, but there is a ton of young unknown talent vying for the #2 cornerback spot. If it weren’t for a frightening neck injury last season, De’Vante Bausby would have the inside track for this position. He says he is back at full strength, so we’ll see. Behind him you have rookie third-round pick Michael Ojemudia, third-year pro Isaac Yiadom, and a slew of other reserve cornerbacks. Denver really needs one of these players to step up big in camp.

Biggest storyline heading into training camp: Drew Lock. There is plenty of hype around Drew Lock after he led the Broncos to a 4-1 finish in 2019. Entering his second season, he is surrounded by talent at every skill position. How he capitalizes on that will be the biggest storyline of camp and of 2020.

Under-the-radar storyline heading into training camp: The defense. Nearly every story coming out of Denver this offseason has been about Drew Lock and the weapons John Elway surrounded him with, but if you look deeper you will find that Elway improved the defense as well. To help Von Miller avoid the double and triple teams he got in 2019, he traded for Jurrell Casey and re-signed Shelby Harris. Bradley Chubb returns from his season-ending knee injury as well. That front seven is quite stacked and is going to be an underrated strength for Denver.

Notable injuries heading into training camp: None really. The biggest concern is how potential starters at critical positions come back from 2019 injuries. The two biggest concerns come from right tackle Ja’Wuan James and cornerback Bryce Callahan. Denver absolutely needs both players at full strength this season. The other big name coming back from a major injury is Bradly Chubb who is coming off an ACL.

Thanks once again to Mile High Report for their perspective. The Bills travel to Denver in Week 15.