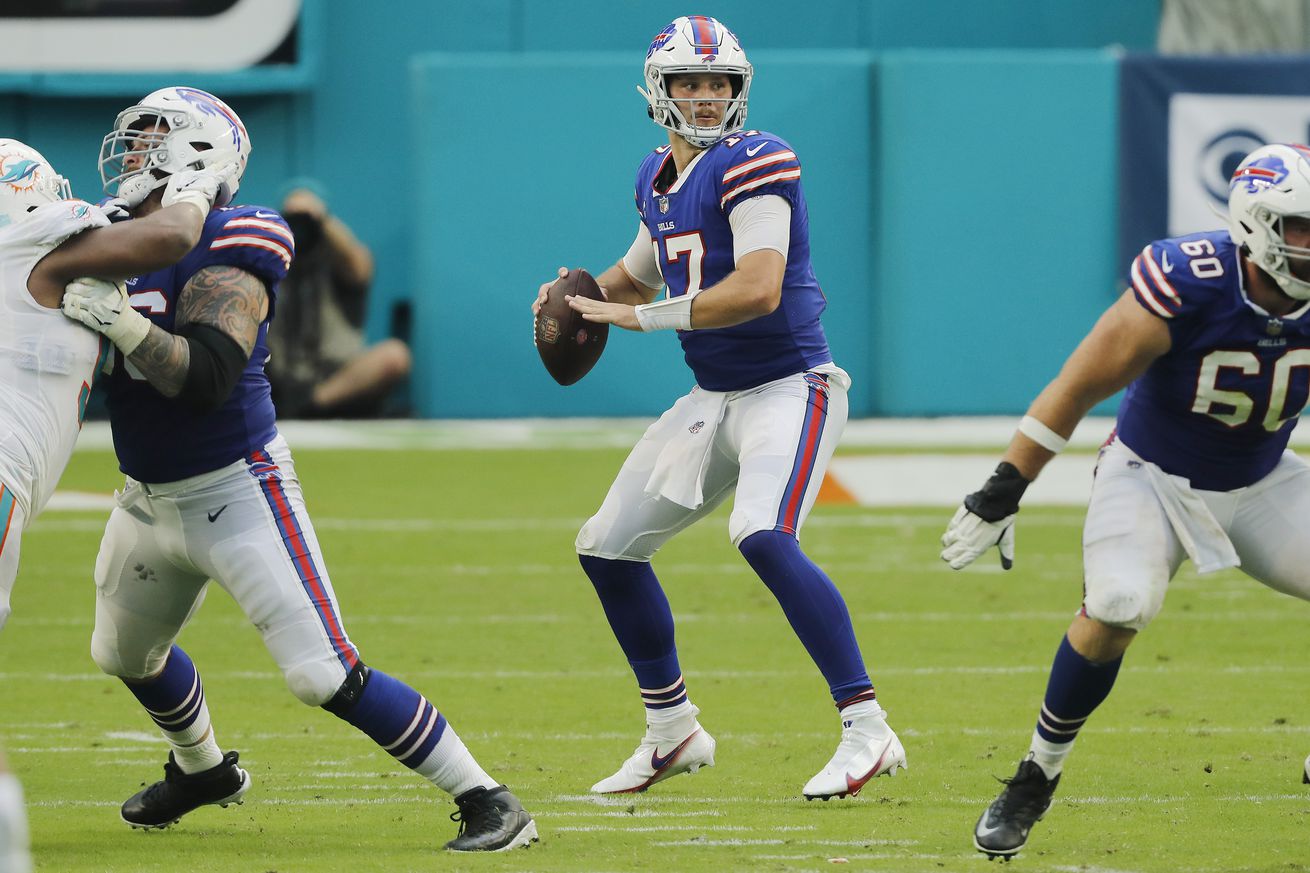 Led by Josh Allen’s career day, the Bills are 2-0 for the second straight season.

Coming off a 31-28 win over the Miami Dolphins in Week 2, today’s edition of the Buffalo Bills daily links has every angle of the victory covered!

There was plenty to like on Sunday: Josh Allen’s career game (passing for 417 yards with four touchdowns), Stefon Diggs’s stellar performance (eight catches for 153 yards and his first TD with the Bills), the offensive line providing ample time for Allen to throw the ball (only one sack allowed) and the quick-strike offense recording three plays of 46 yards or more, to Jordan Poyer’s big day on defense (eight tackles, one sack, two quarterback hurries), a huge goal-line stand, and linebacker Tyrel Dodson filling in admirably with Tremaine Edmunds and Matt Milano sidelined (seven tackles and two passes defensed).

There were also plenty of areas of improvement for the Bills, beginning with Levi Wallace and a defense that got torched by ex-Bill Ryan Fitzpatrick for 410 yards of total offense (328 passing yards for Fitzy), the linebackers who allowed Mike Gesicki to run wild for eight catches, 130 yards and a TD, and Dawson Knox, who had a big fumble and dropped pass before leaving the game with a concussion.

Catch up on everything from Week 2 with the daily links!

Josh Allen has the game of his life in Bills victory – Democrat & Chronicle
Josh Allen threw for a career-high 417 yards and four TDs as the Bills beat the Dolphins 31-28 Sunday.

Bills hold off Dolphins for wild 31-28 win in Miami – WGR 550
Josh Allen throws for more than 400 yards for the first time in his NFL career as the Buffalo Bills win a wild 31-28 affair over the Miami Dolphins on Sunday at Hard Rock Stadium.

Hot reads: When things get more bizarre, Josh Allen delivers another big-time game | Buffalo Bills News | NFL | buffalonews.com
After having his first 300-yard passing game in last week’s win against the New York Jets, Josh Allen outdid himself with a 417-yard, four-touchdown performance against the Dolphins.

Bills report card: Josh Allen and Buffalo offense are putting on a show – Democrat & Chronicle
Sal Maiorana grades the Bills after their 31-28 victory over the Dolphins in Week 2.

Column: Josh Allen verifies he’s a franchise QB as Bills go to 2-0 | Buffalo Bills News | NFL | buffalonews.com
Even if it’s only two games into the season and 30 into his NFL career, Josh Allen has put the official “verified” stamp on his status as a franchise quarterback.

So, is Josh Allen good? – WGR 550
57 completions on 81 attempts, 719 yards and six touchdowns. That’s the raw stat line for Josh Allen through the first two games of the 2020 campaign, leaving nearly every Buffalo Bills fan with the same feeling of jubilation to start the season.

It’s a whole new ballgame vs. man coverage for Josh Allen, Bills | Buffalo Bills News | NFL | buffalonews.com
Man up against Josh Allen and the Buffalo Bills at your peril.

In Diggs and additions, Bills’ offense has ‘big-time players making big-time plays’ | Buffalo Sports | buffalonews.com
The Bills are a trendy pick to win the AFC East for the first time in a quarter century.

Bills Today | Rookie playmakers earn praise from the quarterback – BuffaloBills.com
Here are three things to know about the Bills on Monday, Sept. 21.

Defensive-minded McDermott on Bills’ offense: ‘I don’t like winning 11-9. I like winning’ | Buffalo Bills News | NFL | buffalonews.com
Through two games in 2020, the Bills are averaging 28.5, with 31 points vs. Miami and 27 vs. the Jets in the opener.

Bills vs. Dolphins – Game Recap – September 20, 2020 – ESPN
Get a recap of the Buffalo Bills vs. Miami Dolphins football game.

Josh Allen: “We Believe in Our Playmakers” – BuffaloBills.com
Quarterback Josh Allen discusses his career passing day, being aggressive on offense, and another fourth-quarter comeback.

What makes Ryan Fitzpatrick so special? His Bills teammates have stories – The Athletic
“He made me push farther than I thought I could go and do. That was my favorite year in the NFL playing in front of Fitzy.” (Subscription required).

Broadcast outage, lightning delay provide dose of 2020 to Bills’ win | Buffalo Bills News | NFL | buffalonews.com
A power outage in South Florida meant the CBS television feed was lost for about 20 minutes during the first half of the Bills’ thrilling 31-28 win over the Dolphins.

Five Takeaways: Josh Allen and Stefon Diggs are so good together in Week 2 win – Buffalo Rumblings
The Bills are on a winning trajectory.

Stefon Diggs racking up the catches in first two weeks as a Buffalo Bills receiver – Buffalo Rumblings
Diggs has been very good.

Miami Dolphins failed to sell 12,000 tickets for Sunday’s game against the Buffalo Bills – Buffalo Rumblings
And we were worried about a competitive advantage.