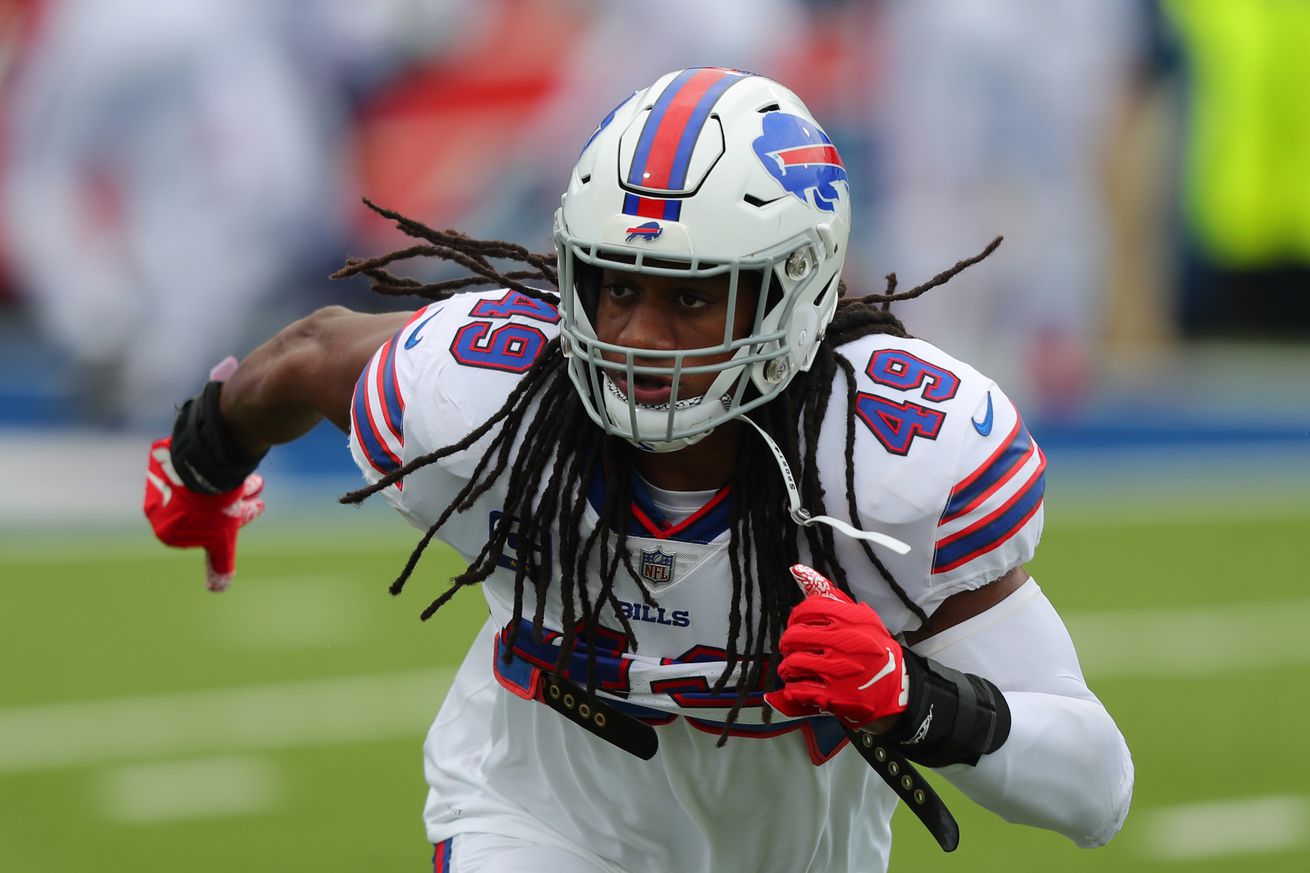 Plus, where WR Stefon Diggs wants to improve after an impressive Bills debut.

In today’s edition of the Buffalo Bills daily links, we examine the state of the team’s injured linebacking corps, which saw Tremaine Edmunds, Matt Milano and Del’Shawn Phillips sit out Wednesday’s practice session while fellow linebacker Tyrel Dodson was a limited participant in advance of Sunday’s Week 2 clash with the Miami Dolphins.

We also discuss what quarterback Josh Allen is doing to work on his ball security when he takes off on a running play, hear from wide receiver Stefon Diggs on where he sees room for improvement following his impressive Bills debut, analyze what defensive end Trent Murphy is doing to prove the doubters wrong, learn which former Buffalo Bills are candidates for enshrinement in the Pro Football Hall of Fame, see where the Bills landed in the NFL power rankings, and much more!

Bills down four linebackers as prep begins for Dolphins – Democrat & Chronicle
The Bills’ defense will likely be without Matt Milano on Sunday in Miami, and Tremaine Edmunds might also miss the game.

Bills Today | Stefon Diggs looking to iron out the wrinkles – BuffaloBills.com
Here are three things to know about the Bills for Thursday, Sept. 17.

Bills never had any intention of cutting Trent Murphy – Democrat & Chronicle
Trent Murphy’s name kept coming up as a possible salary cap casualty in the offseason, but the Bills stuck with him and he started well on Sunday.

Tasker, Hull, Bennett, Talley among former Bills nominated for Pro Football HOF | Buffalo Bills News | NFL | buffalonews.com
Drew Bledsoe, another former Bill, is one of eight quarterback candidates. Ex-Bill Troy Vincent, who is executive vice president of football operations for the NFL, is one of 18 candidates at defensive back.

Prince Amukamara: Buffalo Bills showing interest in CB (report) – newyorkupstate.com
The Bills could be looking to add the talented free agent to their roster according to Jeremy Fowler.

What Josh Allen, Jordan Poyer + others said about Bills-Dolphins – BuffaloBills.com
Josh Allen, Stefon Diggs, Mitch Morse, Jordan Poyer and Tre’Davious White talked about how the Bills are preparing to face Miami on Sunday.

Bills opener rating is highest in five years | Buffalo Bills News | NFL | buffalonews.com
The game had a 38.9 household rating on WIVB-TV (Channel 4), which was 8% higher than the 36.0 rating for the 2019 opener.

Column: News photographer shares ‘weird’ experience of empty Bills opener | Buffalo Bills News | NFL | buffalonews.com
“I have seen a lot of football, but nothing prepared me for Sunday’s game. COVID-19 has changed everything about the coverage of NFL games, including the photography.”

Jamie D. and Big Newt: Was Josh Allen’s career day enough? – Buffalo Rumblings
Josh Allen set a career high with over 300 yards passing against the New York Jets, but just how good was Allen in the season-opener?

BBR: Josh Allen, designed runs by the Buffalo Bills QB, and sliding for my sanity – Buffalo Rumblings
Designed runs are fine. Not sliding is a bit different.

Will the Buffalo Bills’ 2020 season be where opportunity and optimism meet? – Buffalo Rumblings
Beane, McDermott, & Allen are the vanguard of this era.