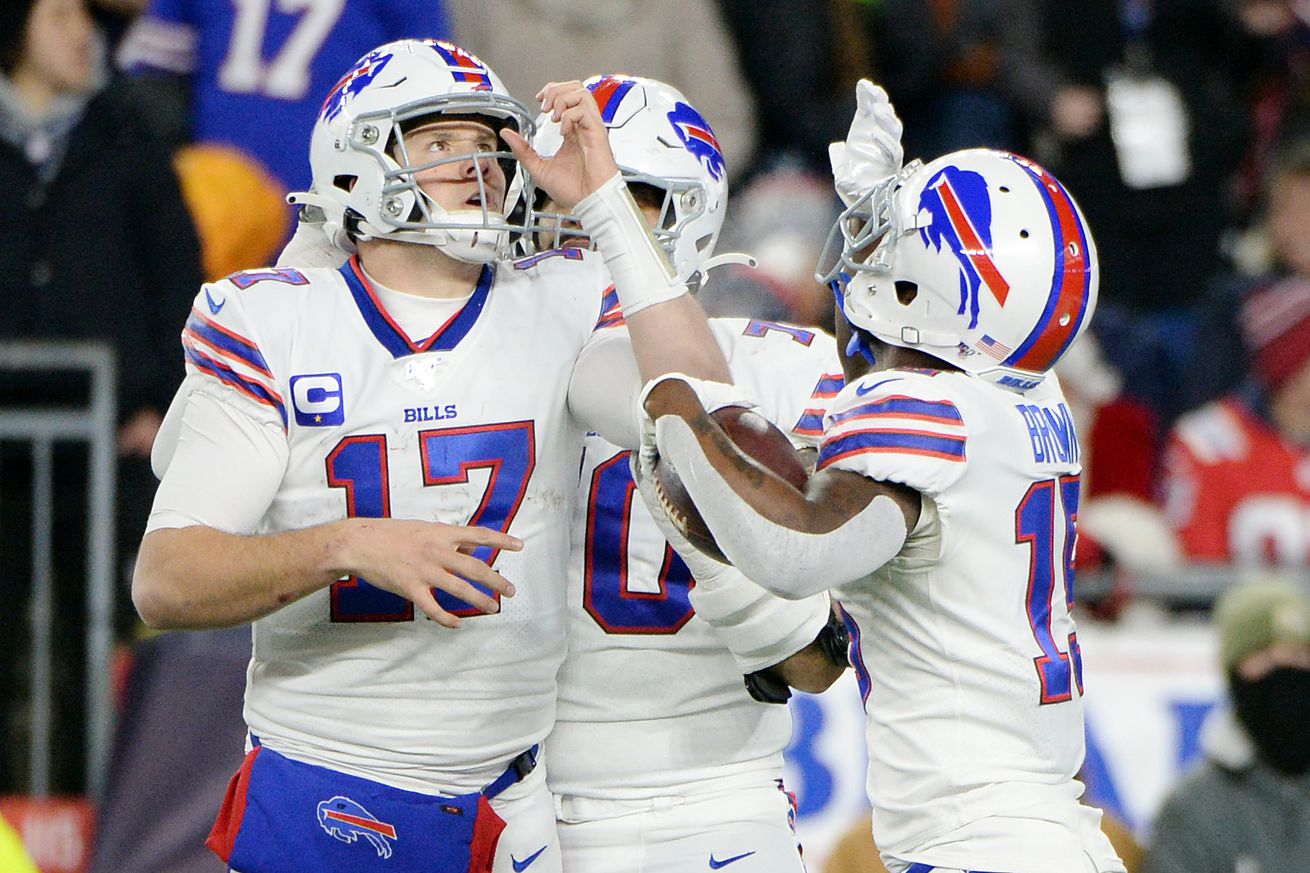 Plus, the Bills have their kicker and punter positional battles sorted out.

In today’s edition of the Buffalo Bills daily links, we offer up our observations from Buffalo’s intra-squad scrimmage Thursday. Facing the defensive backups, Josh Allen, John Brown and the Bills’ offense put on a display, with Allen looking quite sharp in directing the offense to four total touchdowns. Conversely, facing the offensive second-stringers, Buffalo’s defensive line—led by Jerry Hughes, Ed Oliver, Quinton Jefferson, Mike Love and Darryl Johnson—enjoyed a banner day during the scrimmage.

Before the Bills took the field at their team facility in Orchard Park, NY, head coach Sean McDermott and his players held an emotional team meeting where they discussed not scrimmaging due to the latest racial unrest. After much discussion, the team opted to play. We hear from several players, including defensive end Jerry Hughes and running back Devin Singletary, on using their platform to advance social justice and change.

We also break down the news that the Bills have settled their punter and place kicker competitions, releasing veteran Stephen Hauschka and newcomer Lachlan Edwards while handing the jobs to rookie Tyler Bass and veteran Corey Bojorquez. We discuss why Singletary is ready to assume a larger role in the backfield in 2020, analyze the Bills’ fullback competition, and much more!

Day 9 at Bills camp: Open discussion about social justice and a scrimmage – The Athletic
The Bills met Wednesday night to talk about the issues facing Black people in this country and decided to move forward with practice. (Subscription required).

Josh Allen sharp in Bills scrimmage -WGR 550
With and against a very stiff wind, Buffalo Bills quarterback Josh Allen was very sharp in the team’s scrimmage Thursday inside Bills Stadium, throwing for two touchdowns and running for another.

Maiorana: Scrimmage shows Bills offense could be a lot of fun – Democrat & Chronicle
Josh Allen will have plenty of weapons at his disposal in 2020.

After emotional meeting in wake of Jacob Blake shooting, Bills scrimmage – Democrat & Chronicle
The Bills considered not holding their scrimmage Thursday due to the latest racial unrest in the country, but instead opted to play.

Bills WR Stefon Diggs sits out scrimmage with sore back | Buffalo Bills News | NFL | buffalonews.com
The session, held in Bills Stadium, was considered the most important practice of training camp thus far because it would give players and coaches a chance to simulate game-like conditions.

Bills release kicker Stephen Hauschka and punter Lachlan Edwards – BuffaloBills.com
The Bills will have a new kicker for the first time since 2017.

Bills Today | Devin Singletary is ready to roll into year two – BuffaloBills.com
Here are three things to know about the Bills for Friday, August 28.

Former Colts roommates Jerry Hughes, Mario Addison reunited with Bills – Buffalo Bills Blog- ESPN
Nearly nine years after they learned the ropes in Indy, the longtime pals are in Buffalo ready to pay it forward on another great defensive front.

Jerry Hughes: “We Should All Be in This Together” – BuffaloBills.com
Defensive End Jerry Hughes discusses his thoughts on what happened in Wisconsin, using their platform to advance social justice and change, and the importance of voting in the upcoming election.

Devin Singletary: “What’s Right is Right” – BuffaloBills.com
Bills running back Devin Singletary discusses using the platform of the players to advance social justice and change, being there for each other as teammates, engaging in open and honest conversations, and his role heading into year two with the Bills.

Analytics: Is Tyler Bass the right choice at kicker for the Buffalo Bills? – Buffalo Rumblings
A way, way too deep dive into data to see if Bass was the way to go…

No “Buffalo Bills: Embedded” this summer – Buffalo Rumblings
Season 3 is over practically before it began.