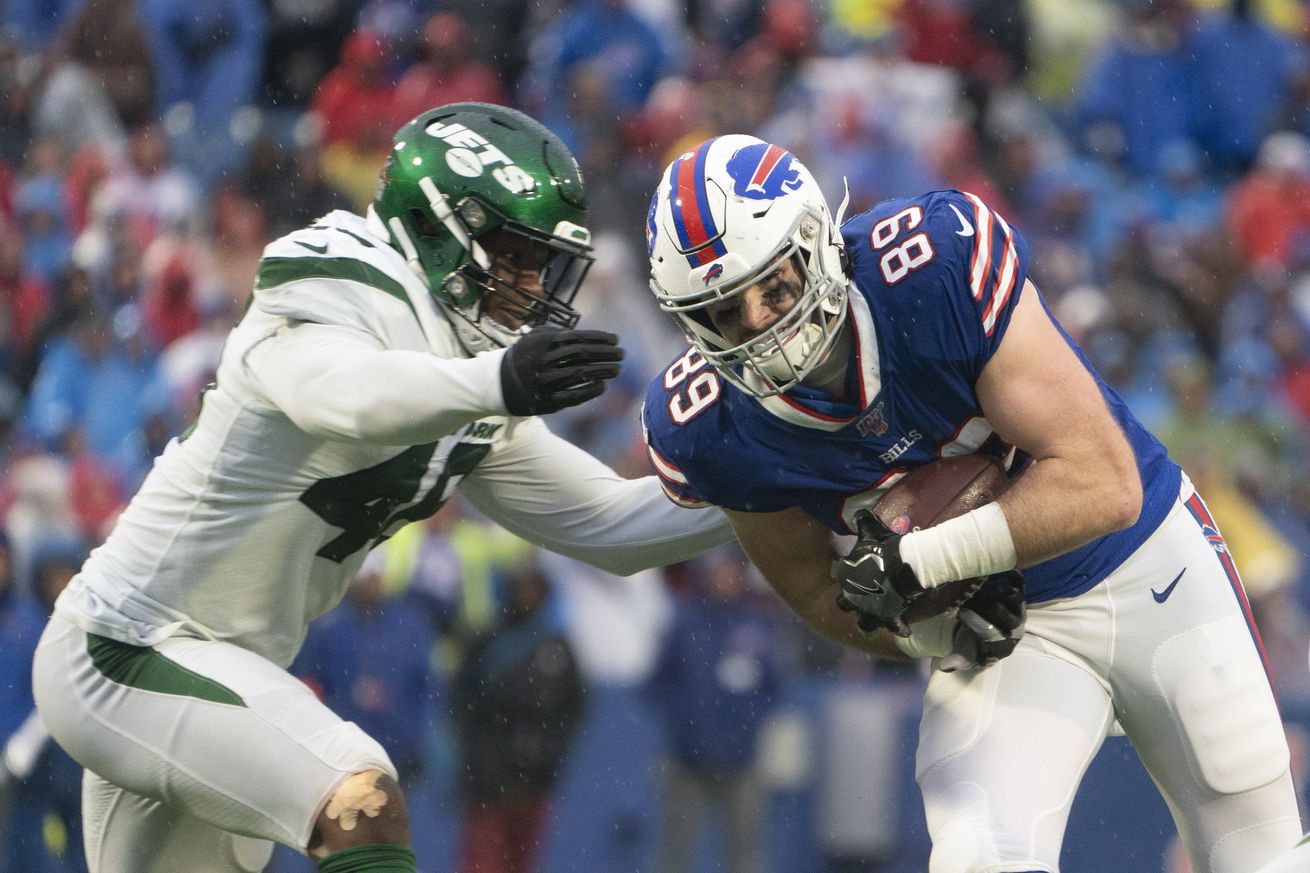 Heading into last season, the Buffalo Bills invested heavily in improving their tight ends, bringing in free agents Tyler Kroft and Lee Smith while using a third- and a seventh-round draft pick on Dawson Knox and Tommy Sweeney, respectively. In today’s edition of the Bills daily links, we analyze why the tight end position represents an opportunity for growth and larger contributions in 2020, and how Sweeney could play a more significant role in the offense.

We also explore the linebacker depth beyond starters Tremaine Edmunds and Matt Milano, examine how second-year linebacker Vosean Joseph is an intriguing developmental prospect, examine which free agent will have the biggest impact this season, debate who will win the kicking battle between incumbent Stephen Hauschka and rookie Tyler Bass, reminisce about the 2003 season opener when the Bills shut out Tom Brady and the New England Patriots, and much more!

Bills’ tight ends have a chance to make a larger impact | Bills | buffalonews.com
This is the fifth in a series previewing each position on the Buffalo Bills before the July 28 start of training camp.

Identifying linebacker depth is one of Bills’ pressing camp priorities | Sports | buffalonews.com
This is sixth in a series previewing each position on the Buffalo Bills before the July 28 start of training camp.

Vosean Joseph one of the Bills’ few unknowns entering training camp | Sports | buffalonews.com
The second-year linebacker has yet to make his regular-season debut, having missed his rookie season because of a shoulder injury that landed him on injured reserve.

Camp Countdown 2020 | Which free agent will have biggest impact? – BuffaloBills.com
In the eighth article of their Camp Countdown series, Maddy Glab takes a look at the free agents who will make their debut in Buffalo.

Buffalo Bills defender could be worthy of Patrick Mahomes contract, says NFL writer – newyorkupstate.com
CBS Sports’ Will Brinson laid out an argument for the Bills to lock down this cornerstone player for ten years.

Camp Countdown 2020 | Who will be the Bills place kicker? – BuffaloBills.com
In the seventh article in their Camp Countdown series, Chris Brown takes a look at the kicker competition.

NFL Teams Preparing to Limit Fan Attendance If Safe | WGR 550 SportsRadio
As the NFL prepares for the 2020 season amid the coronavirus pandemic, teams are figuring out ways in which it would be safest to allow fans to attend games.

NFL’s most complete teams in ‘20? Ravens, 49ers, Chiefs top the list – NFL.com
Heading into the 2020 season, which NFL teams are the most complete? Adam Schein spotlights nine organizations, including Josh Allen and the Buffalo Bills.

It was a glorious 2003 opener when the Bills crushed the Patriots – Democrat & Chronicle
For the first time in five meetings with Tom Brady, the Bills beat the Patriots, a 31-0 blowout in the 2003 season opener in Buffalo.

2019 Top Play: Josh Allen 34 Yard Pass to Dawson Knox – BuffaloBills.com
This 34-yard grab was a thing of beauty! Dawson Knox makes an unbelievable one-handed catch to set the Bills up for an easy touchdown at the 1-yard line.

2019 Top Play: Isaiah McKenzie’s 46 YD Jet Sweep – BuffaloBills.com
With the game tied at the beginning of the fourth quarter, Isaiah Mckenzie takes a touch pass from Josh Allen on a jet sweep that would go for 46 yards and ignite the Bills’ offense. This led to a game-winning touchdown just three plays later.

What if Josh Allen’s development doesn’t slow down? – Buffalo Rumblings
A twitter suggestion has us diving into a statistical what if that we’d be happy to see come to fruition.

Epidemiologist “pessimistic” for college football, but pros can “pull it off” – Buffalo Rumblings
Programs just don’t have the resources or willingness to do what needs to be done.

Analysis: Predicting turnovers for the Buffalo Bills in 2020 – Buffalo Rumblings
What might the turnover situation look like for the Bills this season?

2019 Buffalo Bills’ worst salary cap values: TE Lee Smith – Buffalo Rumblings
Even as a sixth lineman, he made a lot of money.