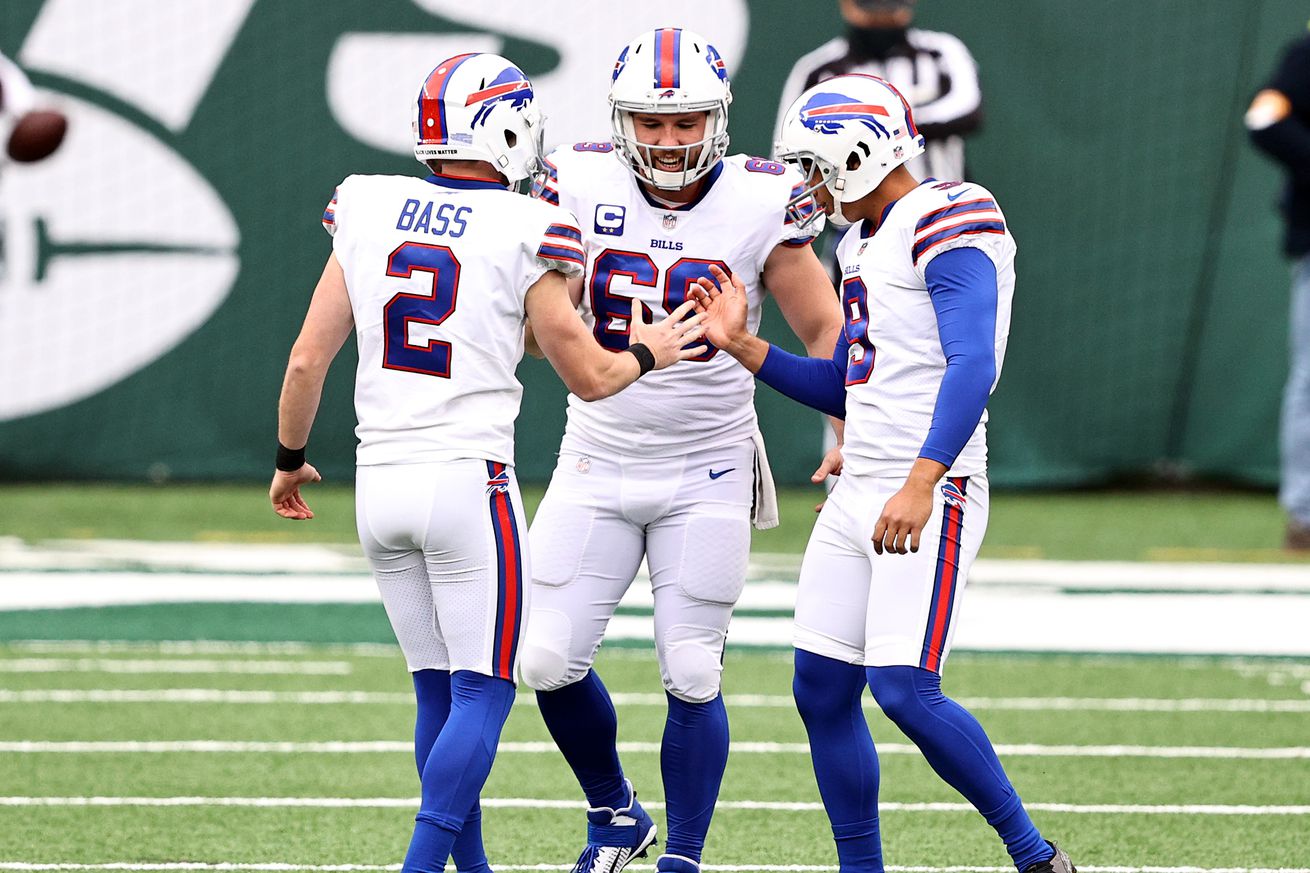 It wasn’t pretty, but we recap how the Bills swept the Jets

The Buffalo Bills (5-2) held off the winless New York Jets (0-7) 18-10 in Week 7 at MetLife Stadium, and in today’s edition of the Bills daily links, we break down the game as the Bills completed the season sweep of the hapless Jets.

We recap the good: rookie kicker Tyler Bass tying a franchise record with six made field goals, wide receiver Cole Beasley setting career highs in receptions (11) and receiving yards (112), quarterback Josh Allen eclipsing 300 yards while directing an offense that moved up and down on the Jets (despite not scoring a touchdown), rookie running back Zack Moss recording 72 yards of total offense, the defense pitching a second-half shutout, rookie cornerback Dane Jackson stepping up and delivering an interception and two pass breakups, defensive tackle Quinton Jefferson tipping a pass that led to the game-sealing interception, and Jerry Hughes recording two sacks as part of a resurgent pass rush that sacked Sam Darnold seven times).

We also discuss the bad: linebacker A.J. Klein is a liability on defense, the run defense allowed the ageless Frank Gore and rookie La’Mical Perine to average 4.6 yards per tote in the first half, the Bills were once again undisciplined with 11 penalties, guards Brian Winters and Ike Boettger were below average on Sunday, Bass badly misfired on a 37-yard field goal before getting into a kicking groove, the offense went 0-for-5 in the red zone and a Bills team with aspirations of a deep run in January allowed a winless Jets team to hang around for much longer than Bills fans would have liked.

Bills-Jets observations: Defense channels 2019 – The Athletic
Why did the Bills let the Jets hang around for so long, and is their sudden defensive revival sustainable? (Subscription required).

The game story: Bills end 2-game skid with 18-10 victory over winless Jets – newyorkupstate.com
Josh Allen and the Bills were held out of the end zone for the first time this season.

Bills avoid embarrassment as Bass, defense step up against Jets – Democrat & Chronicle
It was a frustrating day for the Bills’ offense, but Tyler Bass made six field goals in an 18-10 victory over the Jets.

It was a struggle, but a win is what mattered most – WGR 550
It wasn’t pretty, but an ugly win is much better than a stunning loss.

In win over Jets, Bills do whatever it takes to snap losing streak – Buffalo Bills Blog- ESPN
Buffalo (5-2) fails to score a touchdown against the winless Jets, instead relying on 2020 sixth-round kicker Tyler Bass to knock in six field goals.

Bills hang on to beat Jets 18-10 behind six field goals – WKBW
Tyler Bass tied a franchise record for kicks made in a game as Buffalo moves to 5-2.

Column: Bills are 5-2, but still show signs of struggling | Buffalo Bills News | NFL | buffalonews.com
The Jets are as awful as their 0-7 record indicates. Let’s not lose sight of that while trying to figure out what to make of the Bills’ 5-2 record.

Defense’s second half turnaround leads the way – WGR 550
After a shaky first half, the Buffalo Bills’ defense responded with just four yards against to the New York Jets in an 18-10 win on Sunday at MetLife Stadium.

Bills defense bails out offense in win over Jets – The Athletic
With a win over the Jets on Sunday, the Bills have managed to reach 5-2 despite being outscored for the year, 178-174. (Subscription required).

Just for kicks: Bills hold off Jets with FGs, dominant second-half defense (Week 7 report card) – newyorkupstate.com
Buffalo couldn’t punch the ball into the end zone, but they completed the season sweep of the Jets.

Bills report card: Tyler Bass has record day after rocky start – Democrat & Chronicle
Sal Maiorana’s grades for the Bills after their 18-10 victory over the winless Jets.

The Buffalo Bills beat the NJ Jets: 10 Things I Think I Think – Buffalo Fanatics – Buffalo Bills
What to make of the Bills’ 18-10 win over the winless Jets.

Hot Reads: Nothing comes easy in Bills’ win vs. 0-7 Jets | Buffalo Bills News | NFL | buffalonews.com
Let’s not kid ourselves about the Jets. They are a terrible team that is 0-7 on merit.

‘SHOUT!’ postgame podcast: Bills back in the win column with Patriots up next – newyorkupstate.com
Beat writers Matt Parrino and Ryan Talbot break down the game.

18 points? Bills hit unique total for only third time in team history | Buffalo Bills News | NFL | buffalonews.com
It is only the third time in franchise history that the Bills have landed on 18 points.

Bills Today | How the Bills adjusted to the COVID-19 news – BuffaloBills.com
Here are three things to know about the Bills for Monday, Oct. 26.

Takeaways: Individual performances help Buffalo Bills in an ugly win over the New York Jets – Buffalo Rumblings
The Bills had some guys step up on Sunday.

Code of Conduct: Catching up with Buffalo Bills LB Lorenzo Alexander – Buffalo Rumblings
J. Spence had a chance to catch up with the former Bill