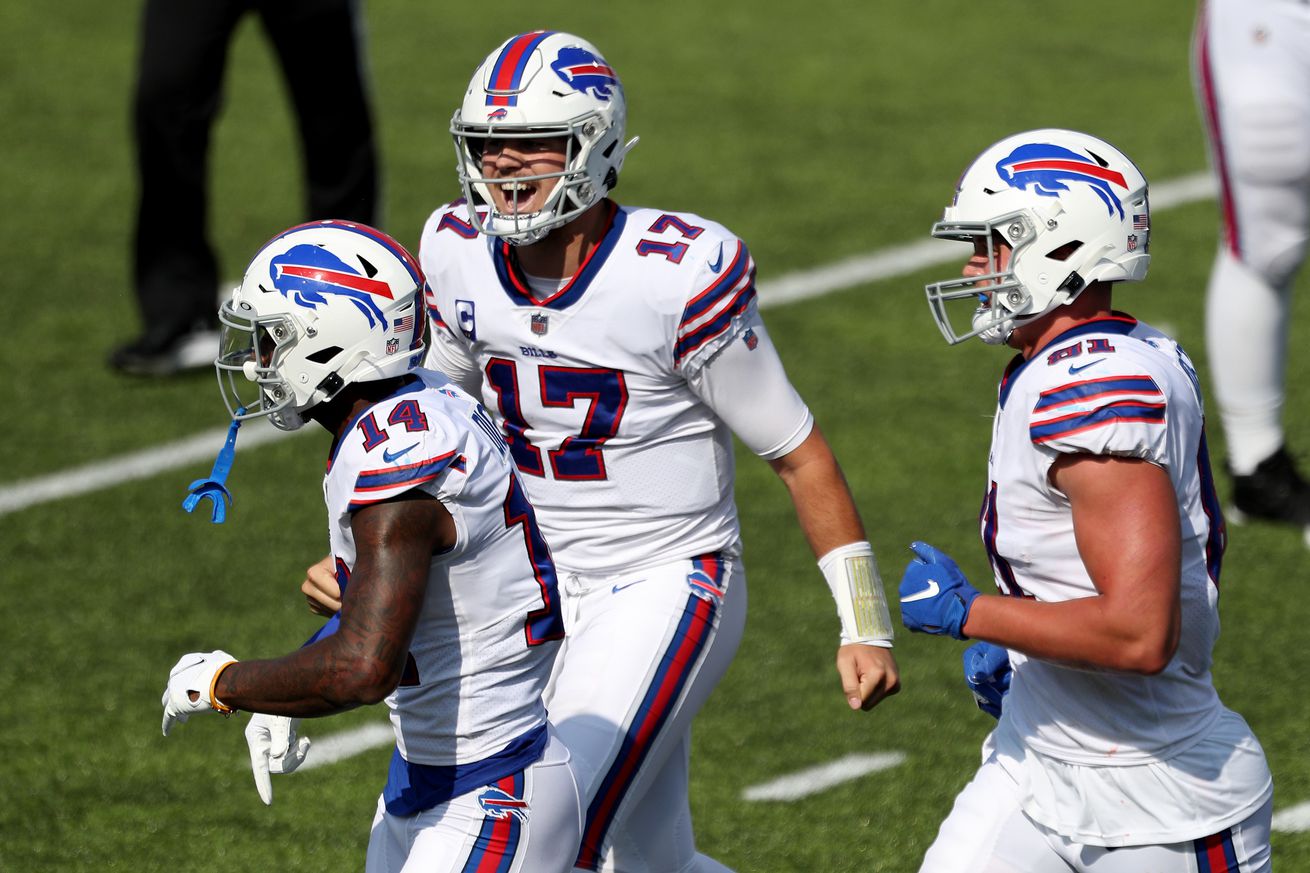 After a monumental collapse turned into a huge comeback win, the Bills find themselves in the top five this week

The Buffalo Bills are rolling, off to a 3-0 start for the second straight season. While last year’s undefeated start was largely the result of a stellar defense, this year’s hot start is thanks to the tremendous growth of the offense.

Quarterback Josh Allen has grown exponentially this year, as he looks more poised, more accurate, and more confident. It’s his third year in the league, and his third year with the same offensive coordinator, so that comfort isn’t necessarily unexpected. What is a bit unexpected, though, is the Bills’ efficiency so far this year.

For what has been a defensive team for as long as many fans can remember (literally, as you have to go back 20 years to the 2000 season for the last time Buffalo finished in the top ten in total yards, and even further back to 1992 for the last time they finished in the top five), the Bills have come into their own on offense. It’s early, for sure, but it’s been forever since a Bills teams won a true shootout like they did this weekend against the Los Angeles Rams.

Accordingly, Buffalo’s placement on most power rankings this week has jumped, as well, with a victory over a top NFC team propelling them to greater heights than a pair of victories over weaker AFC East Division foes. The Bills are in the top ten across the board this week—and in most cases, they find themselves ranked within the top five.

Mark Maske at the Washington Post has the Bills ranked No. 7 overall, right between the Pittsburgh Steelers (6) and New England Patriots (8). Maske notes that the Bills were up big against the Rams, but then managed to blow a 28-3 lead before rallying for the victory. He called a pass interference penalty on fourth down against Rams’ cornerback Darious Williams a “gift,” but also said that the blown lead and the penalty call shouldn’t be held against the Bills. It’s worth noting that Williams made contact with Buffalo wide receiver Gabriel Davis at the five-yard line, and the line of scrimmage was the 13, meaning that he had illegally contacted Davis at best and interfered with him at worst.

Adam Hoge at NBC Sports has Buffalo ranked No. 5, one spot ahead of the Baltimore Ravens this week. He also made note of the “generous” call against Williams giving Buffalo the chance at victory. He went on to write that quarterback Josh Allen has been “better than [he] expected.”

Vinnie Iyer at The Sporting News placed Buffalo at No. 5, as well. The fifth spot seems to be the most frequent placement for Buffalo this week. Iyer wrote that Josh Allen “wants in on the MVP conversation,” noting that he showed corner Jalen Ramsey that he is anything but the “trash” that the loquacious corner called him in a 2018 GQ interview. Iyer wrote that Allen should be more “treasured” as a clutch QB, which given his seven career fourth-quarter comebacks, isn’t a bad observation. His thoughts on Buffalo’s running game and defense needing to improve are warranted, though I’m not sure that the running game is functioning poorly, per se, as Devin Singletary is averaging 4.9 yards per carry right now. However, through three games, Singletary only has 32 total attempts, so the Bills haven’t shown the kind of commitment to the ground game that they have in the past.

Matt Williamson at Pro Football Network has Buffalo ranked No. 5, the final entry into his top-tier teams thus far. In what is certainly becoming a repetitive thing to read, Williamson noted that Buffalo hung on to beat the Rams thanks to a questionable pass interference penalty giving them an opportunity. Anybody want to talk about a questionable interception that swung momentum in the Rams’ favor? No? Bueller? Williamson goes on to say that Josh Allen and the Bills are “here to stay.”

Marcel Louis-Jacques at ESPN has Buffalo ranked No. 5 also. He was asked to identify the prediction that appeared to be wrong through the season’s three games about Buffalo, and he had predicted that the Bills would have “an offense somewhere between good and competent” with a dominant defense. That has yet to materialize through three games, as the Bills’ offense has been downright outstanding with the defense lagging behind. After playing short personnel against the Miami Dolphins, they were healthier against the Rams, but Los Angeles is one of the best offensive teams in the NFL. I don’t think it’s time to panic quite yet about the Bills’ D, but steps in the right direction this week against the Las Vegas Raiders would be nice.

Dan Hanzus at NFL.com has Buffalo ranked No. 6 overall, right behind the Seattle Seahawks and right before the Tennessee Titans. Hanzus noted the oddity of a team allowing 29 unanswered points and still coming out with a victory, chalking it up to a 2020 thing in the process. He said that the Bills have “a little bit of magic in them right now,” and he complimented Allen for playing “hero” in the fourth quarter. He also mentioned that Allen’s 12 total touchdowns (ten passing, two rushing) are a team record through three games.

Mike Florio at Pro Football Talk ranked the Bills No. 4 overall. He called the Bills’ 28-3 lead “the most dangerous lead in football,” noting that the team nearly let the lead go. He also hearkened back to the glory days by noting that Bills Stadium has seen a great lead slip away once before.

Finally, Pete Prisco at CBS Sports has Buffalo ranked No. 4 overall. He writes that Allen has the Bills’ offense looking “special,” but also takes care to note that the defense has not been good. “They have to play better on that side of the ball,” Prisco writes. Some of the “issues” the defense has are health-related, and the Rams exposed some things based on Buffalo’s scheme as it related to what Los Angeles was able to do. The Rams are one of the NFL’s best offenses, so giving up 32 there isn’t necessarily surprising. Allowing 29 unanswered in a miserable second half defensively is a bigger concern.