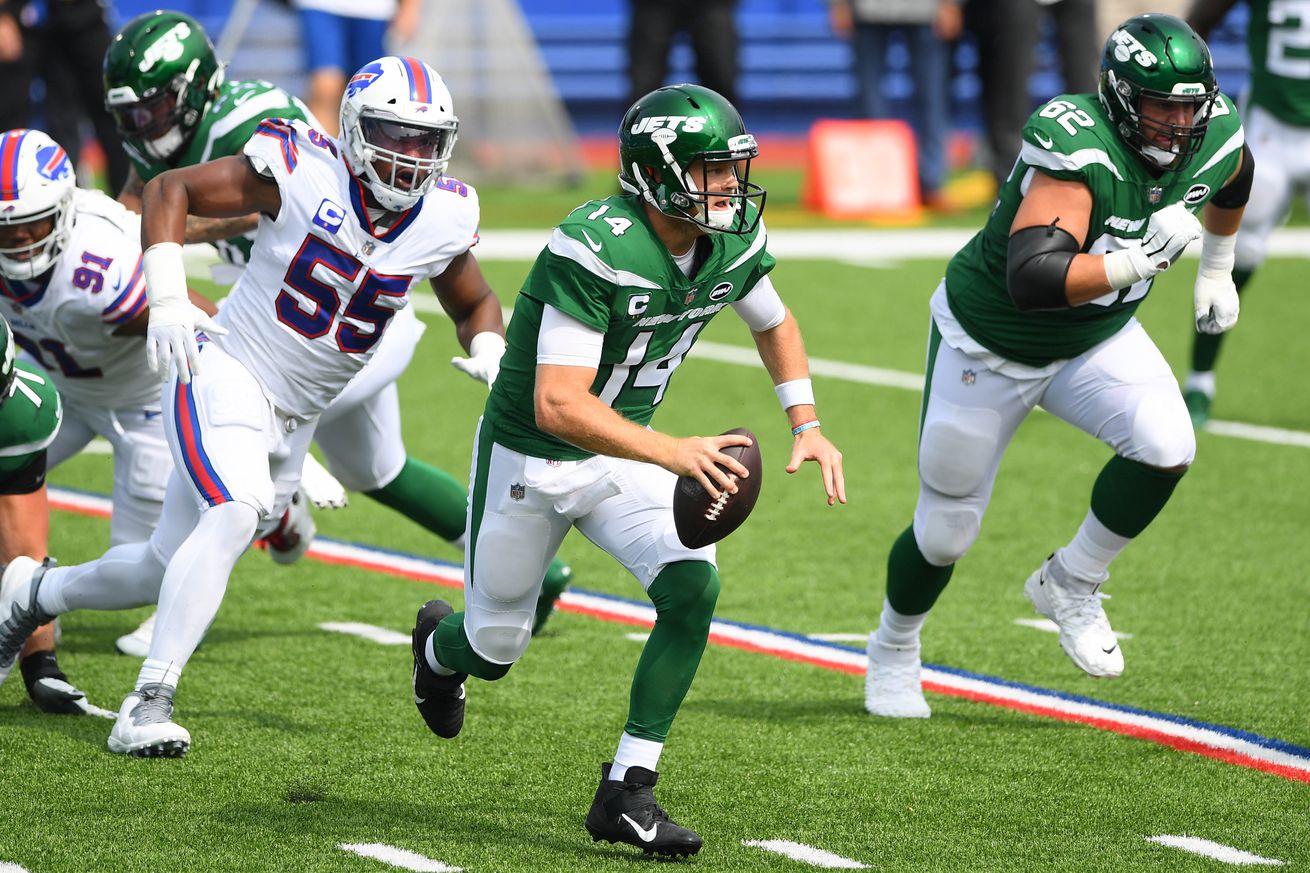 Normally I’d be delivering some sweet, sweet All-22 GIFs and recapping a part of the Buffalo Bills’ performance from Sunday’s game but sadly the coaches’ film seems to be delayed this week. I contemplated waiting for it, but a couple other resources I draw from were also delayed as the 2020 streak of sucking hard continues. I had planned on looking at the defensive line anyway, which is usually visible with the some-22 footage, aka “the broadcast feed.”

Now one game can hardly be considered proof of schematic tendencies, but against the New York Jets the Bills brought some heat. Often satisfied with a four-man rush in 2019, they frequently added a fifth and sometimes sixth person into the action last Sunday. The result is a bad pocket that Sam Darnold is trapped in, helping to create an errant throw. (Edmunds is mirroring the running back, who stayed in to block as the safety valve.)

In the first play it’s 3rd and 7 so an aggressive play call isn’t too surprising. On 2nd and 6 the Jets have their entire play book available, making this what I call an “ambiguous down.” It didn’t matter. The Bills play it aggressive and the line finds gaps in the Jets’ offense. Justin Zimmer is back in a hurry. If you’re taking attendance, this is the “B” squad that includes Zimmer, Darryl Johnson, Harrison Phillips, and Mario Addison.

On the very next play the Bills only increase their aggression. With a stacked line they’re trying to confuse Darnold about who’s coming. This is our first, but not last, taste of Mario Addison in coverage. This is in addition to floating him around the line. Back to the play, Darnold is seeing a wall of ghosts.

Here’s a four-man rush consisting of the starters. That allows more coverage on the back end, and as you can see there’s still quick pressure. The grouping of Jerry Hughes, Ed Oliver, Trent Murphy, and Quinton Jefferson flush Darnold, which dictates the options he has left. From there, Tre’Davious White has no difficulty seeing where the ball is going.

The Jets adapted in the second half and tried some quick passes to beat the pressure. The Buffalo Nickel defense had the speed to counter it.

One more shot of the “backups.” Addison keeps driving until he gets the sack, but the rest of the line decimates any semblance of a pocket, which allows Addison to catch up.

Again, it’s only one game but it was a great start. An aggressive defense started with the line and all of the rotations found a lot of success. A blazing fast defense suffocated the Jets at all levels. Most importantly though, the versatility of the linemen allowed for a lot of different looks that kept the Jets guessing—usually incorrectly.