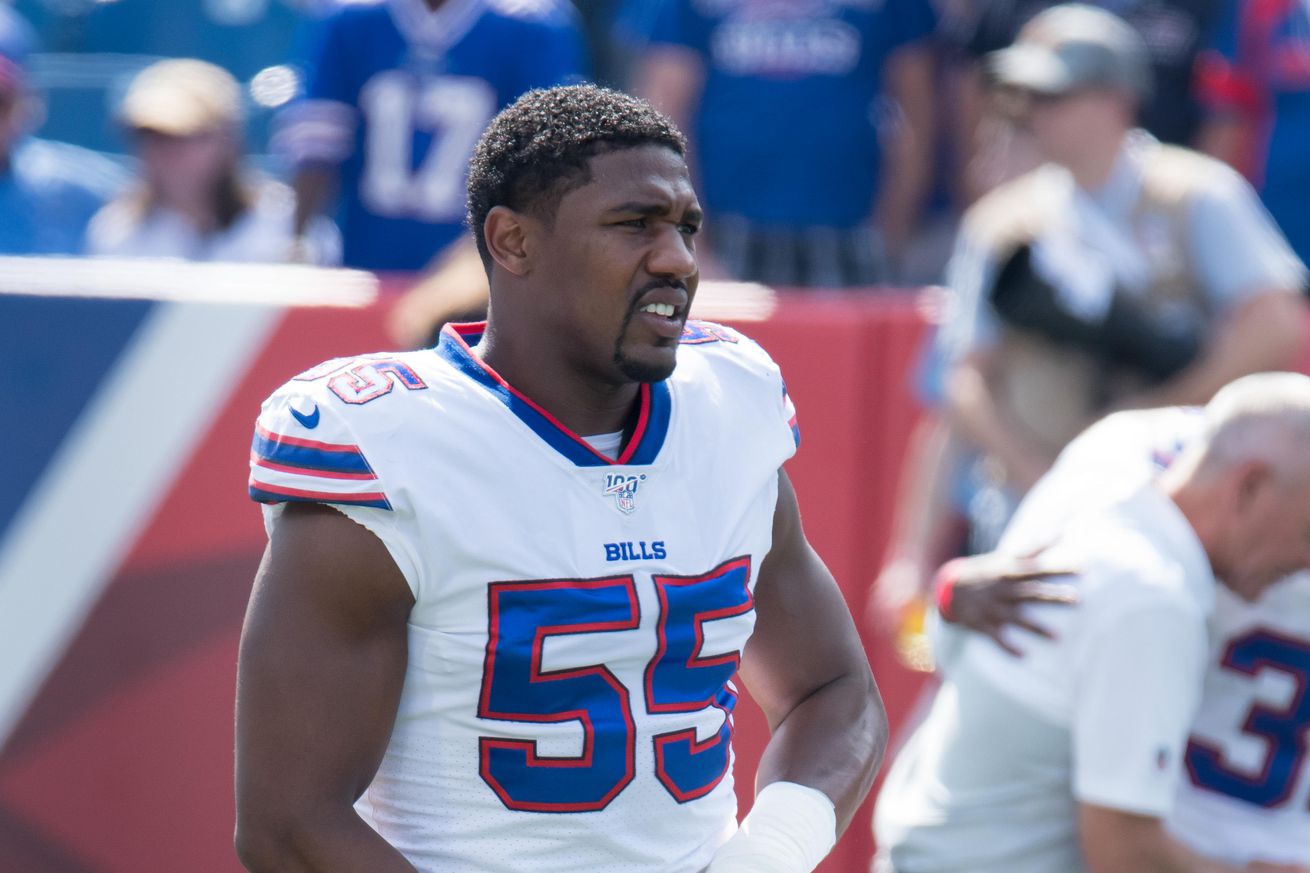 Earlier this week, Jacob Blake was shot seven times by a police officer in Kenosha, Wisconsin. The graphic video of the incident once again put the issue of police brutality against Black men into focus, and the sports community responded in a multitude of ways.

The most prominent early response was the Milwaukee Bucks refusing to play their NBA playoff game Wednesday, leading to all the NBA’s playoff games being postponed on Wednesday and Thursday (and likely Friday). A number of other sports teams and leagues cancelled games and practices in response, as players met with management to try to come up with next steps in the ongoing struggle for racial equality.

The Buffalo Bills were not among the teams that canceled practice, but they did hold a team meeting Wednesday night.

“I can tell you that I thought about [canceling practice],” said head coach Sean McDermott Thursday morning. “We thought about it from the administrative side. We’ve had and will continue to have ongoing conversations about things that are going on in our world and the result of those things.”

In all, nine NFL teams canceled their planned practices on Thursday including the Indianapolis Colts, who held a team meeting where every player registered to vote. The Baltimore Ravens released a statement being lauded around the country for its specificity and action steps. The Detroit Lions stood outside their facility to share their message with local media.

After practice, second-year running back Devin Singletary met with reporters and devoted a portion of his remarks to the situation.

“We had conversations about it, about having practice or not having practice. Ultimately what we came up with is that we need to come together as a team, find a solution, basically use our platform,” said Singletary. “What’s right is right and what’s wrong is wrong, and it’s time for change. That’s basically what the conversation was about last night, and that’s where we’re at as a team right now, what we can do, and how we can use our platforms.”

While that seems vague, it’s because it’s purposeful. Singletary said the players on the team were still trying to figure out what they wanted their next steps to be.

“A couple different things [were] brought up. We didn’t come to an agreement of what we should actually do as a team. I feel like different guys have different ways about it, but at this point we’re still trying to come up with a solution on how to move forward and we have this platform so we can reach out to different organizations for social justice, whatever it may be ways that we can help,” Singletary said. “Last night was really good for us, we were able to open up about how we felt, address certain things. We don’t want that to divide a team, so I felt with that, that was able to help us understand each other and come closer, being able to move forward in the right way.”

Veteran defensive end Jerry Hughes was much more direct with his comments following Singletary on the virtual call with reporters.

“We’ve all grown up in this country and we all understand what takes place for African American men and women and how, socially, they have been killed in an unjust fashion,” Hughes told reporters. “So, we felt like it was big this year to kind of really make sure that we get the guys to come together, so that way we can go out and help educate the youth, help give back in any way that we can. If you’re lacking in any type of educational supplies and need any kind of words of encouragement, we could be there for them as people have been throughout our life, and just try to continue to do some good in the midst of all this.”

Hughes and Singletary both specifically referenced the Blake shooting, with Hughes calling it “a horrible, disgusting, tragic incident that took place.” Singletary said it could have been his brother or cousin or family member who was shot.

“I think we, as young African American males, felt like by the time we came into our 30s, that this issue would kind of be resolved,” Hughes said. “And we see that our country is still dealing with this racial barrier. For us to kind of use our platform to be able to connect with kids from certain demographics, from certain areas all around the country, I think it’s great for us to kind of do just because we all have children now that we have to raise in this country. And you don’t want them to have to deal with certain things that we have dealt with growing up and we certainly don’t want to be able to put that on them as to where it needs to end or be resolved by the time they come of age.”

Hughes also preemptively responded to those that say “stick to football” or similar dismissive comments. He reminded them that when he takes off his helmet and jersey to drive home, no one knows he is a football player and they don’t treat him any differently. His former neighbor shared a story of Hughes being followed into their cul-de-sac and threatened with a gun.

He also took a wider approach to the issue, referencing the killing of George Floyd by Minneapolis police in addition to the shooting of Blake.

“I’m still trying to understand why the people who are sworn to protect and serve Americans are still shooting Americans in their backs,” Hughes said. “You know, they’re still shooting and killing Americans by stepping on on their necks and things like that. Doc Rivers said it best: ‘This is a country that my ancestors, your ancestors, have worked so hard for and we love this country. We love being in this country. We just want the people who live in this country to respect us and to treat us like humans as well.’”

“So, you know, Dr. King, he laid it out beautiful in his ‘I Have a Dream’ speech. We’re still waiting for those days to come where African American men and women will be treated with the same respect as other Americans have been getting throughout this entire time in this country. So, I’m still disgusted, heartbroken as to what’s going on because these things, these acts, these violent acts by police officers have been taking place since my great-grandparents were alive.”

Bills’ owners Kim & Terry Pegula released a brief statement Thursday night on the social media platforms for all of their sports teams.

“We applaud the athletes who have taken a stand this week, and all athletes who have spoken out against racial injustice,” the statement said. “The sports community has the power to lead the discussion and affect change. We remain committed with players, coaches, and staff in our dedication to eradicating racism and inequity. This is bigger than sports.”

This is bigger than sports.

McDermott seemed guarded in his responses Thursday morning, calling the actions of other sports teams “admirable.” “Actions need to be taken,” was as far as he would go in his own comments adding “We’re always going to try and do the right thing.”

The coach didn’t answer directly when asked if players approached him about canceling practice Thursday.

“We don’t make anybody do anything they don’t want to do around here,” said McDermott. “We’re an open team. My door is always open. They know where we my heart is and where the organization’s heart is. They understand that always, they have that option. … These are emotional conversations, these are emotional feelings and emotional decisions.”

The Bucks and the rest of the NBA are likely going to return to action on Saturday following a forthcoming announcement on specific action steps, according to reports. For the time being, it looks like the Bills won’t miss any time in response to this specific event.