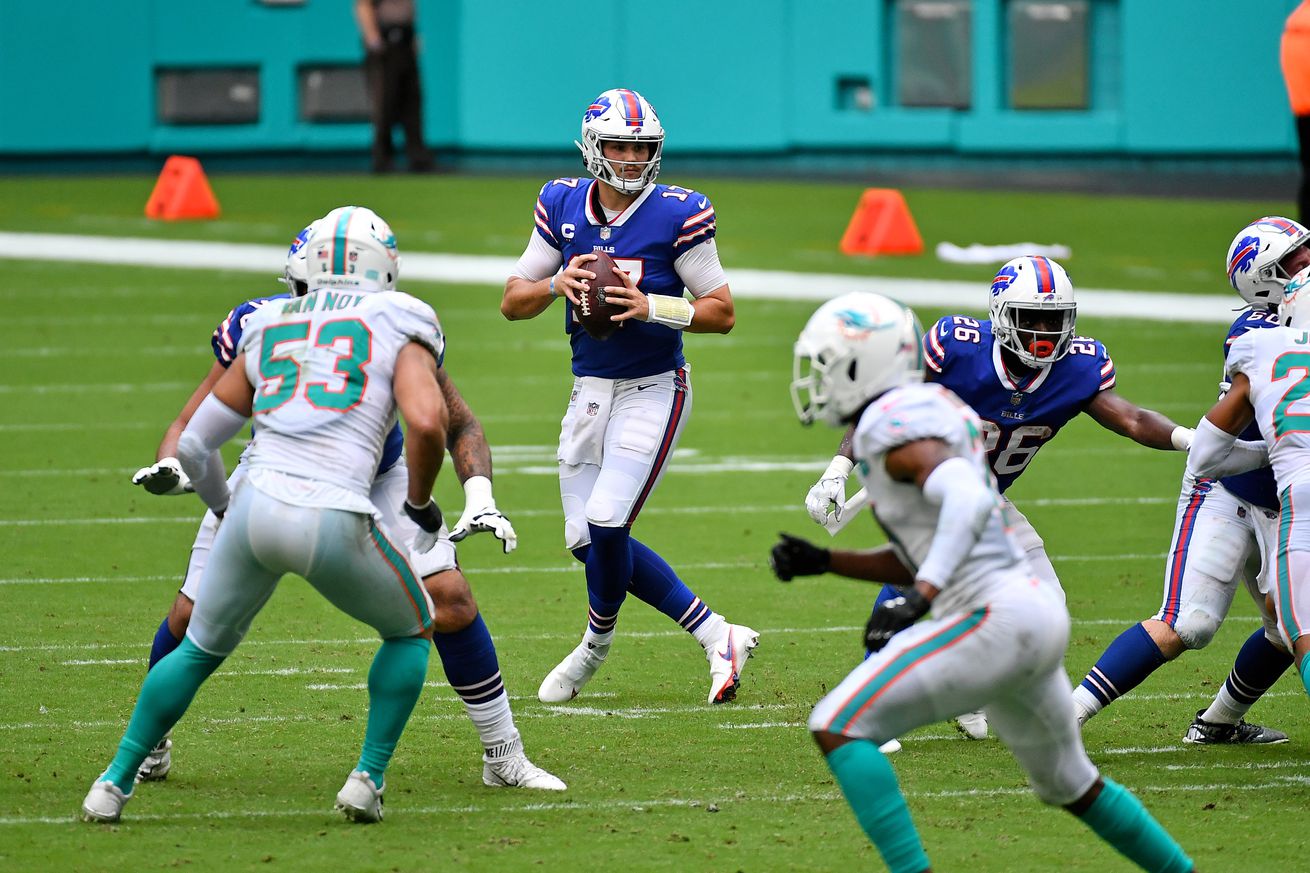 The new age of Bills offense has arrived!

Match-ups between the Buffalo Bills and Miami Dolphins are always memorable, but this one, in the year 2020, definitely set a standard. The bizarre day featured downpours, power outages, lightning delays, and 750 combined passing yards. A team known for great defense had to count on its offense to keep victory in reach, and for the first time in a while, the offense delivered. Buffalo won this shootout, 31-28.

A week after picking apart the New York Jets with dinking and dunking, Josh Allen turned into a B-52 Bomber and pummeled the Miami Dolphins into submission with deep pass after deep pass. His spectacular performance couldn’t have come at a better time, with Buffalo’s defense struggling in the absence of their star linebackers. A week after he notched his first career 300-yard passing game, Allen had his first 400-yard passing game. Outside of a lull in the third quarter, Allen was unstoppable: he was on pace for 500 passing yards at halftime.

Allen’s always been a Dolphin predator since entering the league. In his first four games against them, he averaged three touchdowns and 300 yards of offense. Yet today’s performance may be the finest one yet. In the past, Allen used his gazelle-like running ability to slice up the defense. Today, he looked like vintage Ben Roethlisberger, standing tall in the pocket and raining down destruction. Allen averaged 11.8 yards per attempt today, thanks to his incredible deep throws—he had 17.0 yards per completion! Stefon Diggs was the main benefactor, holding a majestic 8/153/1 receiving slash, but John Brown (4/82/1) and Cole Beasley (5/70/0) got theirs, too.

The Dolphins, and venerable QB Ryan Fitzpatrick, did not let Buffalo walk away quietly. They fiercely fought back time and again, taking the lead at one point in the third quarter, and Fitzpatrick brought the team within three with less than a minute remaining. Miami took advantage of the missing Tremaine Edmunds and Matt Milano, turning to tight end Mike Gesicki time and again. He had eight catches for 129 yards and a touchdown. After the second half began, the game never felt in hand until the closing minutes of the game—but the Bills rallied when they had to, preserving a 24-20 lead with a punt, leading to one last TD drive by Allen.

The Bills are now 2-0 on the season, keeping their first-place standing intact for another week.

Dawson Knox suffered a concussion in the second half and didn’t return to the game. Ed Oliver twisted his leg after getting tripped, and left the game briefly, but returned to play out the string.