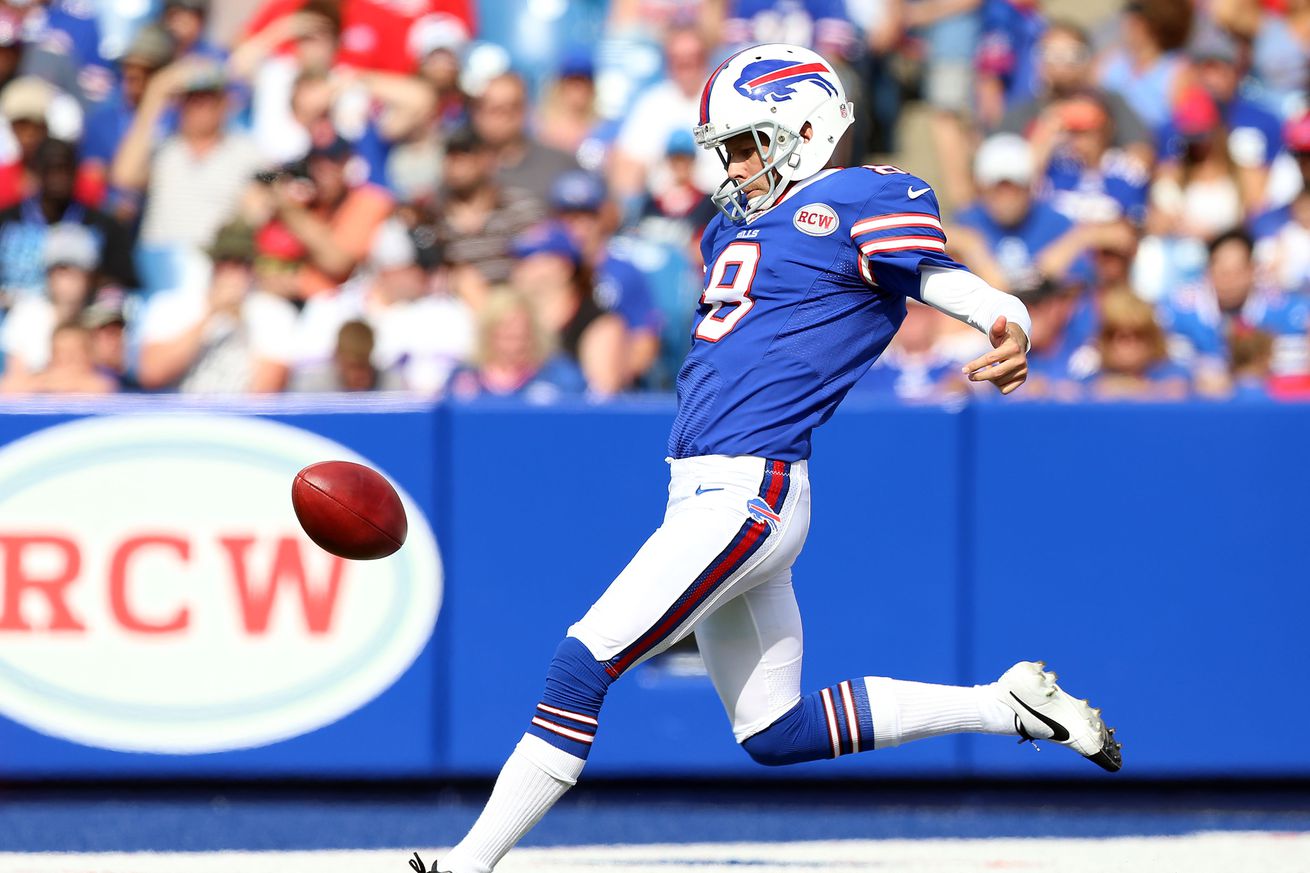 The Buffalo Bills icon of the 2000’s was undoubtedly Brian Moorman. Punting from 2001 onward, Moorman was a two-time All-Pro, a second-team member of the Pro Football Hall of Fame’s Team of the Decade, and the narrow favorite for the Buffalo Rumblings Player of the Decade.

That was then. This is now. In the 2010’s, Moorman was only around for three seasons. Two other players took the reins afterward. How do they all stack up? Let’s take a look.

By 2010, the iconic Bills punter was 34, four years removed from his All-Pro days, and entering the late stage of his career. He was still effective from time to time, and set a career high in 2011 with 48.2 gross yards per punt. Three games into 2012, the Bills released Moorman. They were afraid of losing undrafted punter Shawn Powell out of Florida State, who they’d signed in the offseason. Moorman played the rest of the season with the Dallas Cowboys.

Powell’s strong leg couldn’t overcome his tendency to kick line drives or misfire out of bounds, and a year later the Bills brought Moorman back for an 11-game swan song. At 37 years old, he punted 61 times for a gross average of 41.2 yards, and he retired the following year.

Undrafted in 2013, Schmidt hit his roster break when he joined the Bills late in the 2014 preseason. He became the starting punter for the next four years. During that stretch he gave the Bills a good, if inconsistent, punter. His overall career gross punting average of 44.0 yards rates second among Bills punters with at least 150 punts, just a smidge behind Brian Moorman. But Schmidt mixed good seasons (a year with a 46.4 average) with bad seasons (three years with an average below 43.0). Later in his career, his tendency to mishit punts and send them careening out of bounds with little distance, became too much to bear.

In 2018, his fifth season with the Bills, Schmidt was cut just before opening day in favor of undrafted rookie Corey Bojorquez. Schmidt later returned to the Bills when Bojorquez landed on injured reserve, but after three games of mediocre results, the Bills dropped him for Matt Darr.

Schmidt later played for the Birmingham Irons of the AAF, and was also drafted by the XFL (landing on injured reserve) before coronavirus shut down the league in its infancy.

Bojorquez entered the league in 2018 as an undrafted free agent by the New England Patriots. They waived him in roster cuts, and the Bills claimed him for their 53-man roster, giving the team their first left-footed punter.

Bojorquez had a nice rookie debut for the Bills, with good distance, few returns, and a tendency to land punts inside the 20-yard line. Midway through the season, he suffered a shoulder injury on a botched play, where Bojorquez (and only Bojorquez) thought he was running a fake field goal. He’d land on injured reserve.

In the 2019 preseason we saw the Cory vs Corey punting battle, which was decided by Cory Carter’s torn ACL. Bojorquez returned for another year of punting. While he still carried over his tendency for fewer returns and coffin-corner kicks, his punts trended shorter and the returns more successful. Overall, the 2019 season was a step back for the young footballer.

Entering 2020, Corey will now battle Kaare (Vedvik) for the rights to punt with this year’s Bills team.