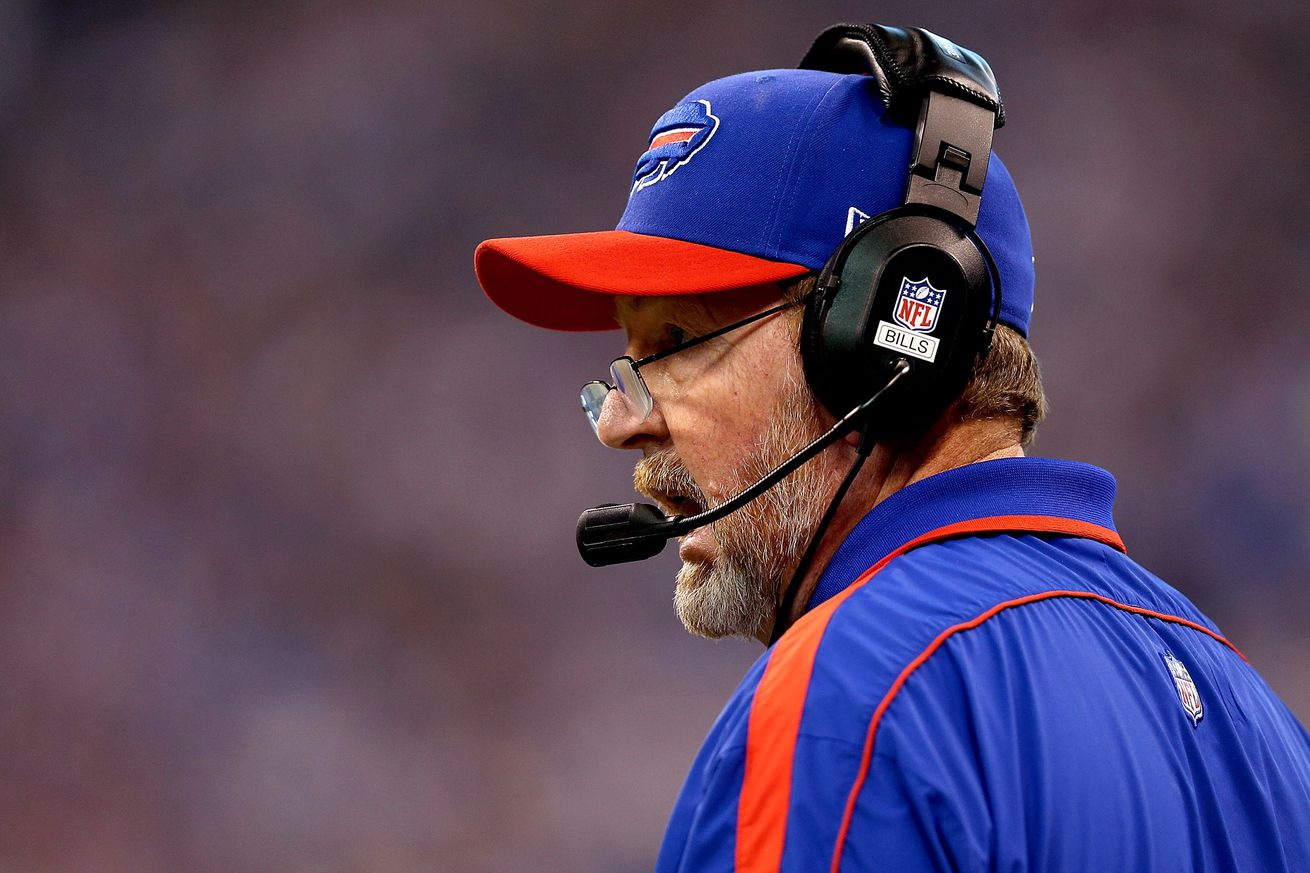 Who was the best coach of the past decade?

There’s no question who the favorite from this list is. But we’ll profile each of these head coaches before sending up the poll.

How he arrived: Gailey was hired in the wake of the “Inner Circle” imploding, along with general manager Buddy Nix. It wasn’t a popular hire: fans had been hoping for a big splash with someone like Mike Shanahan, Bill Cowher, Marty Schottenheimer, or up-and-coming defensive coordinator Leslie Frazier.

The sell: Gailey had two years of head coaching experience and an 18-14 career coaching record. He was a skilled offensive mind, heading to a team that fielded embarrassing offenses for years under Dick Jauron. He promised to move the team back to the 3-4, away from Jauron’s increasingly unpopular Tampa 2 system.

His philosophy: He shied away from big-name assistants and big-name players, especially early on. A creative offensive mind, he embraced spread concepts and the Wildcat package. On defense, first he supported a 3-4, then he insisted the defense was “multiple,” then he hired Dave Wannstedt to coach a straight 4-3.

The results: Bad. In his first season, the Bills opened 0-8, finished 4-12, and landed the third overall pick. 2011 started with a 5-2 record, then the team collapsed down the stretch. In part due to crippling injuries, they finished 6-10. The team went all-in on the 2012 season and signed star DE Mario Williams, but they were still bad. They were 3-6 at midseason, and finished 6-10 for the second straight year. Gailey was fired after that season.

How he arrived: The search included coordinators Ken Whisenhunt, Ray Horton, and Mike McCoy. College coaches Chip Kelly and Doug Marrone were on the list, as was former head coach Lovie Smith. Marrone ended up the winner, and fans were optimistic.

The sell: Marrone revived the Syracuse football program down the Thruway. Before that, he was the offensive coordinator for Sean Payton’s New Orleans Saints. He spoke about delegating playcalling duties, hiring experienced coordinators, and generally treating his first-time NFL head coach gig as a supervisory role.

His philosophy: While Marrone had young, creative Nate Hackett as his offensive coordinator, his scheme and game-day process was conservative and run-heavy. On defense, he allowed the coordinator to dictate the plan. Between Mike Pettine and Jim Schwartz, that gave the Bills a terrifying, smothering, and aggressive defense.

The results: Marrone didn’t improve the Bills’ record in year one, breaking in a rookie quarterback. But the defense impressed, to the point that Pettine was hired as the Cleveland Browns’ head coach after that year. In year two, Marrone’s hire of Schwarz paid dividends and the defense ascended to “elite.” The offense was still stuck in the mud, and Marrone promoted Kyle Orton to start after four weeks to improve performance. The team finished 9-7 and missed on the playoffs thanks to a poor conference record. Marrone later resigned in the wake of Ralph Wilson’s death earlier in 2014, and the uncertainty with his contract status.

How he arrived: A coaching search led by the Pegulas and Russ Brandon covered nearly a dozen options, all with NFL coordinating or head coaching backgrounds. They looked at a mix of offensive and defensive candidates. Teryl Austin, Darrell Bevell, Jim Schwartz, Mike Shanahan, Hue Jackson, Josh McDaniels, and Dan Quinn were among the names. Ultimately the group was enamored with Rex Ryan. Fans were cautiously optimistic.

The sell: Ryan had been a loudmouthed coach of a division rival, but he also seemed to have a formula for unsettling Tom Brady. His hybrid defense seemed like it would work similarly to Mike Pettine’s excellent results. He immediately embraced the local culture (wrapping his pickup truck with a gaudy Bills logo) and put the whole league on notice, verbally.

His philosophy: Loud, arrogant, and complicated. His defensive playbook was notoriously difficult to master, with hundreds of different blitz packages. He hired an offensive coordinator (Greg Roman) with a similar tome on offense. Both organizationally and on game day, he made choices by gut feel. Some examples: His weekly rotation of captains, his choice to hire his brother, and his decision to fire Greg Roman after two games in 2016 and promote Anthony Lynn.

The results: The team wasn’t bad, but they weren’t great either. The 2014-2016 Bills teams were (in theory) filled with talented draft picks and free agents, but no one gelled and the team could not win games when it counted. Ryan went 8-8 in his first season, and was fired near the end of his second season with a 7-8 record.

How he arrived: A relatively compact coaching search featured McDermott and Anthony Lynn as front-runners. The Bills were looking for up-and-coming coordinators to elevate to a head coaching role, and they zeroed in on McDermott. It was a bit surprising to see the team eschew the option of continuity with Lynn, who coached a game as the interim head coach. But fans were excited about a relatively new coordinator with a strong resume.

The sell: McDermott had a strong background, both coaching the Carolina Panthers’ defense and working on Jimmy Johnson’s defensive staff with the Philadelphia Eagles. After the Rex Ryan circus, McDermott’s measured, organized approach was supposed to right the ship. He filled his staff with experienced coaches. He preached character, toughness, and a process of continuous improvement.

The philosophy: Process-driven. His 4-3 defense was a simpler flowchart, but used pre-snap disguises to generate pressure. The offense began as a West Coast system, but McDermott later moved on from Rick Dennison and adopted an Erhardt-Perkins playbook with Brian Daboll. The team’s playcalling and game planning was conservative to start, but opened up over the years.

The results: Two playoff appearances in three years. The Bills blew up their whole roster, but with some luck and clutch play, backed into the playoffs in McDermott’s first season with a 9-7 record. Year two featured more roster overhaul and a rookie quarterback, and the offense was horrific. The Bills finished with a 6-10 record. In 2019, with a fuller roster, things turned around. The team finished 10-6 and qualified for the playoffs again.

Now, place your vote: Which man was the best head coach of the past decade?

Editor’s note: If you’re viewing this on a mobile news app, you’ll need to go to your web browser to vote.