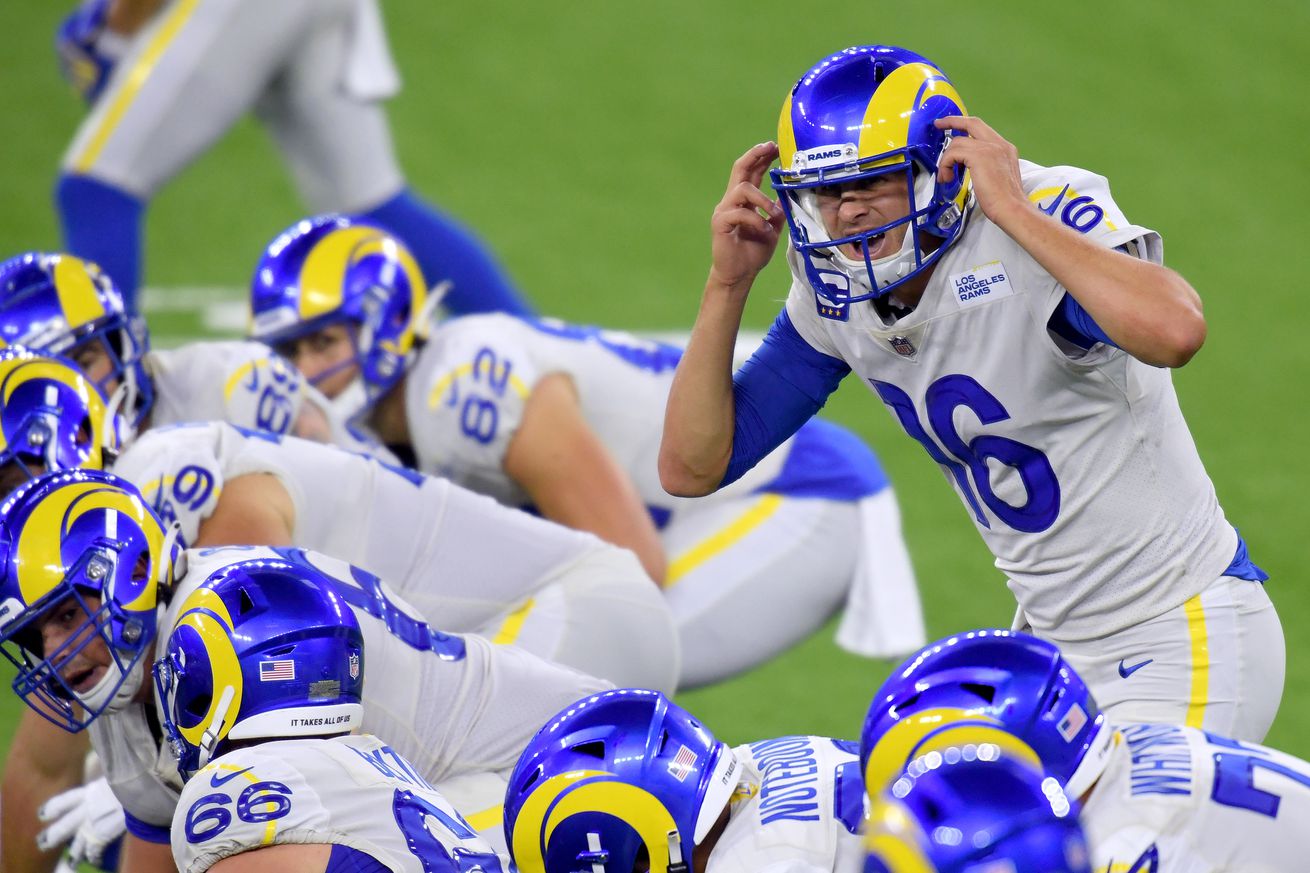 We have a 2-0 showdown on our hands this week.

The NFL season is moving along steadily and this week the Buffalo Bills welcome the Los Angeles Rams in a battle of 2-0 teams. This game marks the first opportunity for Buffalo to make a statement to the rest of the league that they are ready to make some noise. To preview this match-up we talked to Kenneth Arthur from Turf Show Times to catch us up on the Rams.

1) The Rams aren’t missing a beat after moving on from Todd Gurley. How has the offense been able to move on so easily?

You say the Rams are not missing a beat without Todd Gurley and I’m saying that the Rams are moving the ball because they’re missing a beat Todd Gurley. He has been beaten up too many times during his college and pro career and the 2019 version of Gurley held back what head coach Sean McVay had planned to do on offense; a plan that had proven to be hyper successful when Gurley was near 100-percent. But by last season, Gurley was not “feeling 100” and the result was that after a decent Week 1 performance against the Panthers, Gurley finished with 3.6 yards per carry and 4.2 yards per target with two lost fumbles. In 2018, Gurley averaged 4.9 yards per carry and 7.1 yards per target and he fumbled only once while scoring 21 times. Now playing for the Falcons, Gurley has unfortunately produced as little as ever, carrying the ball 35 times for 117 yards and catching two of five targets for one yard. Even during his worst season with Jeff Fisher, Gurley had an impact in the passing game for the Rams. Now Los Angeles looks like they did the best they could after realizing that despite his contract extension that wouldn’t kick in until this year, the Rams had to release him and give snaps to players who were at least healthy and capable of using all of their athletic abilities. Even if those athletic abilities belong to Malcolm Brown.

That’s a playful dig on Brown but let’s be honest, he’s in his sixth season with the Rams and even when Gurley was injured or incompetent as a runner Brown wasn’t getting many opportunities to play. He’s not the athlete that Gurley was to get him drafted 10th overall. Brown was undrafted out of Texas the same year that Gurley went to the Rams but he’s managed to last longer, while making far less money. However, Brown is second in DVOA and sixth in DYAR through the first half of the first quarter of the NFL season and he’s performed completely adequately given the injuries to Darrell Henderson and Cam Akers, third and second round picks over the last two years. Henderson missed much of training camp with a hamstring injury but was probably LA’s best runner last week against the Eagles. Akers has been expected to try his hand at being the next Gurley, but has to deal with all the trappings of being born again as a football player at the NFL level and then he left after a handful of snaps vs Philadelphia because of a ribs injury. Brown is dealing with a broken finger but is expected to play this week. Whether Akers plays, or how and when they use all three running backs, remains to be seen.

That’s only one aspect of why the Rams have managed to play as well offensively as they have. I have many issues in my life but one of them is brevity so let me be brief for the rest:

– The offensive line’s been healthy, unlike last year, and Andrew Whitworth is playing like an all-pro at left tackle

2) Robert Woods and Cooper Kupp each got contract extensions recently. What value do they have in the offense?

Woods is like a catch-all talent at receiver who is incredible with the ball in his hands and space in front of him. He also turns it on when third down comes, posting his best numbers last season (25 of 37, 356 yards, 9.6 yards per target on third down) in that situation. Woods is one of the NFL’s premier receivers when it comes to running the football as well, gaining 272 yards on 36 carries over the last two seasons and he’s already had four carries for 33 yards and a touchdown this season. I know I don’t have to explain much of Robert Woods to Bills fans, though the player he has become under McVay is clearly used much differently — and more frequently — than how Doug Marrone and Rex Ryan utilized him.

Kupp is slightly bigger and was more of Goff’s red zone threat than Woods, catching 13 of 18 RZ targets in 2019 for seven touchdowns, compared to 6 of 9 targets for Woods in the RZ. Kupp finished with 10 receiving touchdowns overall and while some may think of him as the player with the higher “ceiling” the reality is that these two players are roughly the same age. They do have different skills and weaknesses (Kupp had three drops last year) and I’d say they are equally dangerous.

3) Speaking of contract extensions, Jalen Ramsey has one coming up. Do you see the team breaking the bank to keep him?

The Rams extended Jalen Ramsey to a five-year, $105 million contract on September 9, topping the deal signed by Tre’Davious White by a significant margin. It’s not commentary by me on White, just a fact about their average annual salary and total money. He was a dominant cornerback for the Rams in the final six or seven weeks of last season and he’s been a dominant cornerback in the first two games of this season. By all accounts, Ramsey is the exact type of corner worth $105 million. For what it’s worth, Los Angeles also extended Kupp and Woods and earlier this year gave Whitworth a new three-year deal, so despite a lot of noise about their bad contracts and the salary cap, they haven’t run into issues in keeping these four players.

4) After two games, what do you want the team to improve on?

I don’t see Brown as the “featured back” kind of featured back, so an improvement opportunity could come with more health and time for Henderson and Akers to be the two main ball carriers. The group has one missed tackle each through two games and that’s good news if the offensive line is opening up wide lanes for you, but eventually these backs will need to create their own opportunities.

Goff has the lowest percentage of “tight window” throws in the NFL through two games, meaning he’s able to hit open receivers all day long. Great playcalling and design by McVay and O’Connell deserve credit here. I think just seeing more of Goff in those difficult situations and tied or trailing late in games, will show what sort of playoff offense this can be … if they can get that far. As we saw in their most recent playoff game, the Rams have yet to prove they can put up points against the NFL’s elite when it’s win-or-go-home.

The Rams don’t have a pass rush outside of Aaron Donald. Leonard Floyd blitzed seven times last week and he has one sack this year. Seeing a second or third pass rusher emerge would be huge for this defense.

I’ve done away with predictions in my life as I find them unavailing and even somewhat destructive. Here’s what I like for the Rams chances: Jalen Ramsey’s potential impact on the game by covering Stefon Diggs. Aaron Donald’s impact in literally any game at any moment. The development of reigning NFC Defensive Player of the Week Micah Kiser and how that translates to covering up the middle of the field as Kiser was rather effective while being targeted 15 times by Carson Wentz last week and he finished with 16 tackles. The possibility that the Bills don’t have a strong running game even though it’s too early to really say if that holds true or not. Buffalo’s 2-0 start coming against the Jets and Dolphins Whitworth being able to rein in a pass rusher like Mario Addison or whoever the Bills throw at him.

Here’s what I like about the Bills chances: I’ve been to a game in Buffalo and out of the 8 or 9 stadiums I’ve seen games at, the Bills home crowd ranks number one. The Seahawks and Broncos and Chiefs are all loud, but Bills fans are a special sort and it felt more like a college game and that everybody who was there was just giving it everything they’ve got because they know it’s a fleeting four-year experience; except in this case, it’s forever. Watching games this year and seeing those empty stadiums, knowing that when the crowd noise changes it is not caused by a large group of humans who witnessed something but instead is controlled by a knob in the hands of a low-level NFL employee. I know there won’t be fans in Bills Stadium for this game and it’s not going to be a factor here but given that the Rams are only going to play the Bills once every four years, I wanted to tell your readers that I can still remember the energy I felt from the crowd that day and I thought being a Bills fan seemed awesome.

What will impact this game for the Bills? White taking Woods or Kupp out of the equation for Goff. Josh Allen attacking Troy Hill with the best receiver depth in the NFL (Hill has supposedly allowed 12 catches on 12 targets this season). Troy Hill does have one interception, so technically not every pass thrown his way has been a completed pass for the quarterback, but every pass has technically been completed! Buffalo maybe getting their run game going for the first time this season against what could be a bottom-10 run defense. We should expect to see literally 30 or more play action passes in this game from both quarterbacks combined. These quarterbacks are thriving on these plays, so it could be the defense that stops the most play action that wins this game. I don’t know who that will be but how this game turns out will reveal a lot about both teams and their upcoming season.