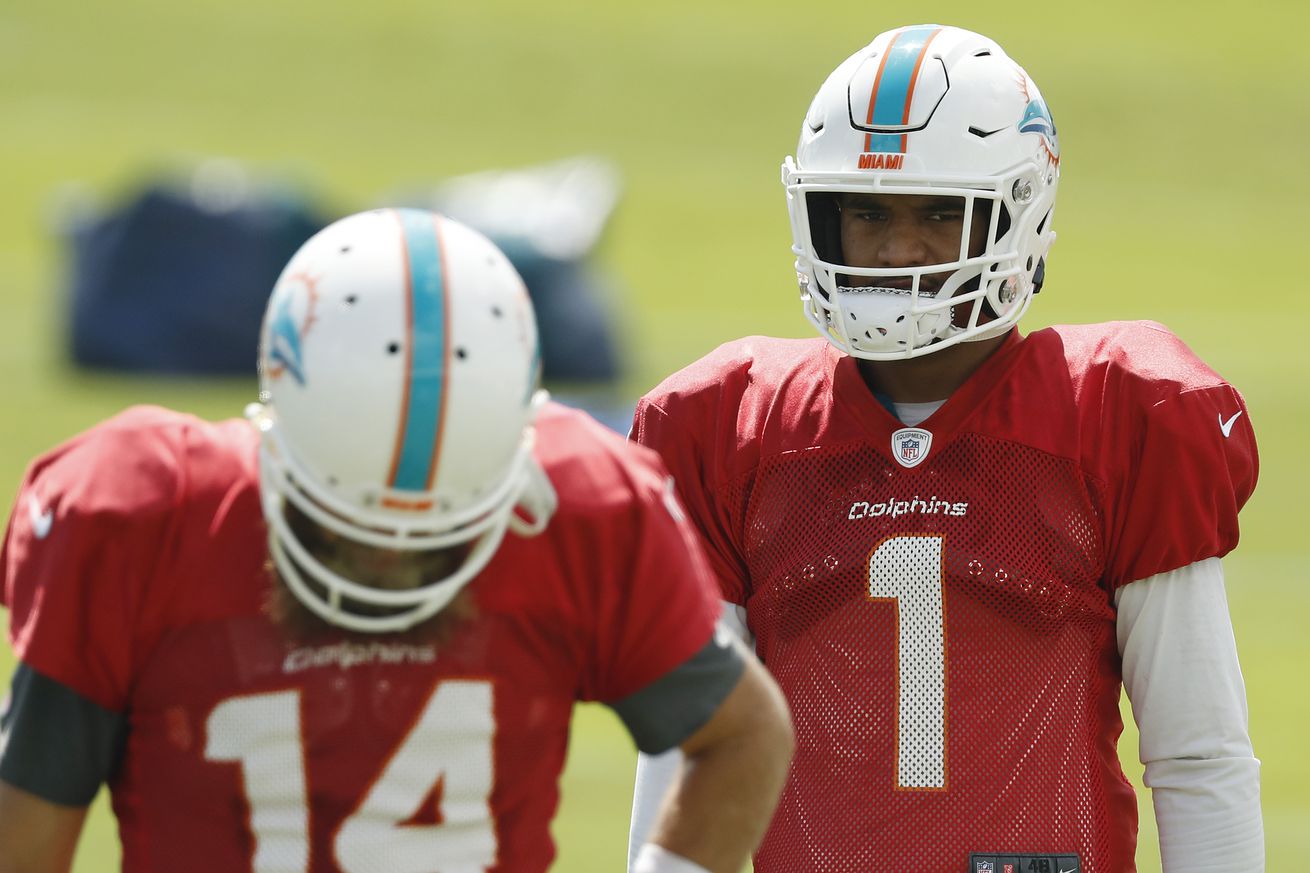 Is Tua time coming to Miami?

On Sunday, the Buffalo Bills take on the Miami Dolphins in South Beach in Week 2 action in the NFL. The Bills are coming off a Week 1 victory over the New York Jets while Miami fell victim to the New England Patriots. To preview the match-up we talked to our good friend Kevin Nogle from The Phinsider for the inside scoop.

1) What was the biggest takeaway you noticed in the game against the Patriots?

The preseason is a necessary evil? Really, the Dolphins just could not find a rhythm during the game, especially on offense, and having any sort of game action before Week 1 may have allowed the team to work out some of the issues. As for the team, the positive was that the offensive line played well. It was not perfect, it was not great, but it was solid for a unit that (a) had never played together, (b) features four of five positions with players who were not on the team last year, and (c) includes two rookies including the left tackle. Somehow, Austin Jackson, Ereck Flowers, Ted Karras, Solomon Kindley, and Jesse Davis seemed to be coming together without any live action before last week.

On the negative side, the run defense was miserable. The Dolphins struggled against the run last year, so seeing them continue to have the problem—especially after trading away their top run-stopping linebacker Raekwon McMillan—was disappointing. Maybe it was they were not prepared for just how different the Patriots’ offense is under Cam Newton, but that means there are coaching/game planning issues. The Dolphins did not set the edge well and they did not have an answer for Newton running on them. At least this week, they do not have to worry about a running quarterb….wait.

2) In a perfect world, when do you see being the best time for Tua to hit the field?

In a perfect world? 2021. Ryan Fitzpatrick plays like Fitzmagic, the Dolphins surprise everyone and battle it out for the AFC East division title and cruise into the playoffs, with Tua taking over next year. It is not impossible that the perfect world could happen, as the Dolphins have a lot of talent on their roster. However, that talent is young and probably needs time to develop. I would guess, if the Dolphins are not dominating their way to a title, a quarterback switch later in the season could be the right move—maybe during the bye week in between the Dolphins’ back-to-back games against the Jets. Plus, starting a rookie quarterback against the Jets may be a great way to ease him into the game.

Of course, if Fitztragic starts showing up on a weekly basis, Tagovailoa may be on the field sooner than anyone thinks.

3) The team decided to put a lot of money into the defense heading into the season and it showed, limiting the Patriots’ offense for the most part. What is the biggest difference you can see from the defense versus last year?

They are definitely stressing the versatile aspect of the defense. They want to be able to line up the same 11 players, without necessarily tipping their hand on who is in coverage, who is rushing the quarterback, and where the match-ups could be. It did not play out as well as they wanted last week, mostly because they went from a base 3-4 set, to having, four, five, and sometimes eight players up on the line to stop the run. Cornerback Xavien Howard was on a “pitch count” last week as he returns from a knee injury last year, so he did not play as much as a starting, Pro-Bowl caliber cornerback normally would, but I would expect more from him this week. The secondary should be the strength of the Dolphins’ defense with Howard and Byron Jones leading the way, and the coaching staff seems intent on shutting down wide receivers. If they can force a team to focus on third- or fourth-choice receivers/tight ends or rely on the running back outlet, they feel they are going to find success. The problem, obviously, is if they cannot stop the run, the shutting down receivers really does not matter.

4) Do you feel that DeVante Parker’s hamstring injury is a cause for concern or do you think he would be able to play through it?

Losing Parker for the second half last week showed just how important he is to the offense. The problem is, Parker has never shown that he can play through an injury. Parker has typically disappeared whenever he has any issue, and hamstrings have often been that issue since he was selected in 2015. He seems to be working his way through it, wearing a compression sleeve during practice this week, but head coach Brian Flores described him as a game-time decision for this weekend. Parker’s history of injuries impacting performance does not support the idea that he will be able to play, or if he does he will not be nearly as productive as he can be, but maybe this week will be the exception to the rule.

5) Do you think the Dolphins will have an advantage on Sunday being able to have fans in the seats?

Honestly, I have no idea what to think. The fans will be there, but the limited seats and the social distancing clusters could prevent them from being as much of a home-field advantage as fans can usually be. It will be interesting to see just how loud the 13,000 fans can be.