We unfortunately have at least our second case of a player’s season being ended due to COVID-19 complications. Bills tight end Tommy Sweeney is the latest, Buffalo announced. 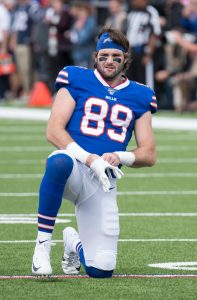 Sweeney has developed myocarditis, a heart condition which is not uncommon with COVID-19 infections. It’s an inflammation of the heart, and is one of the main concerns with athletes getting the virus. Jaguars running back Ryquell Armstead had to be hospitalized twice and was enduring major symptoms before he was ultimately ruled out for the season last month. Fortunately most diagnoses for NFL players have meant an absence of only a game or two, but there are still the possibility of complications even for elite athletes.

Sweeney was drafted by the Bills in the seventh-round last year. He appeared in six games as a rookie and made one start, catching eight passes for 114 yards. Hopefully the Boston College product and former first-team All-ACC selection is able to make a full recovery in time for 2021.