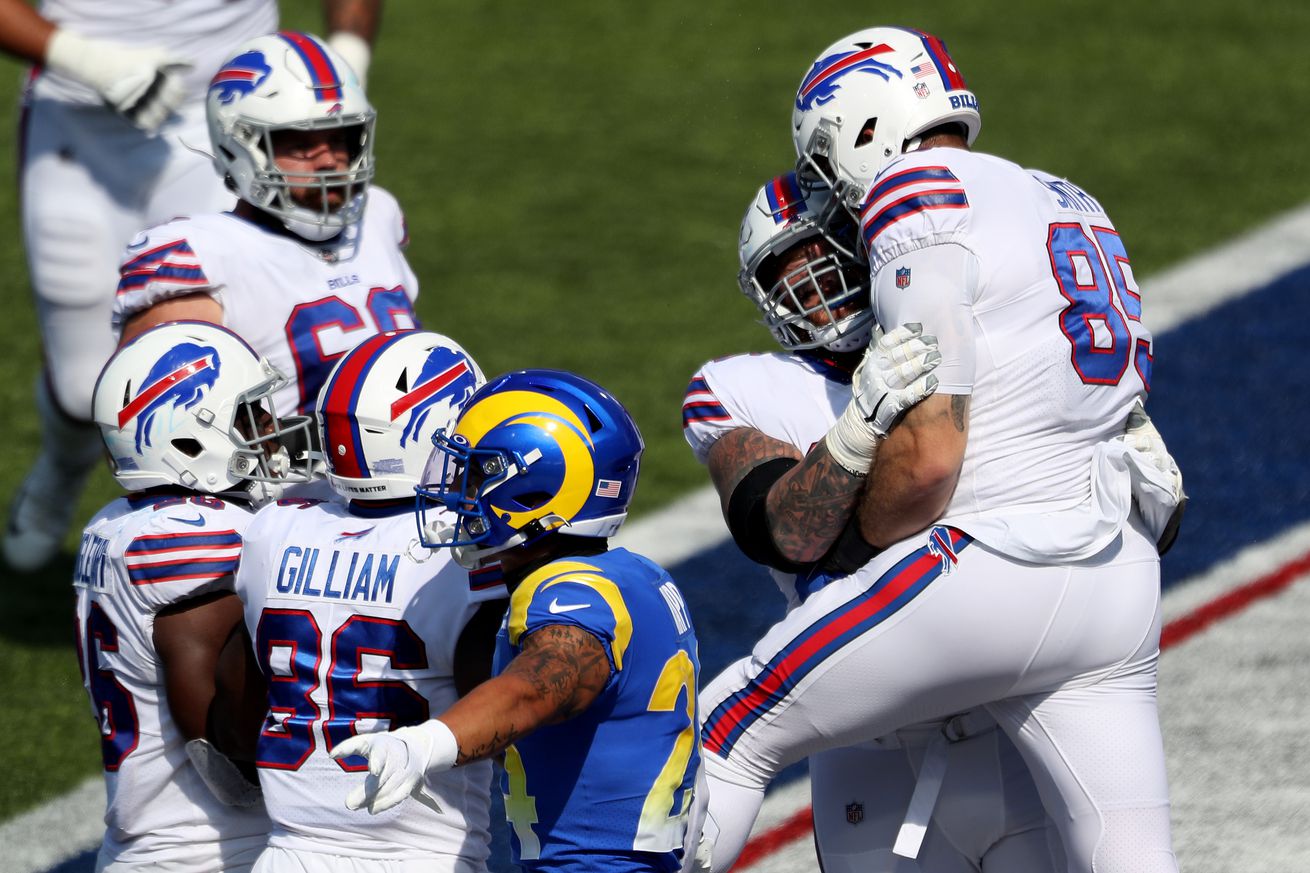 Another week, another set of changes

The Buffalo Bills thrilled fans with another close victory. While “defensive regression” is the topic of the day, let’s also acknowledge that the Los Angeles Rams are a good team that fought like hell to get back in it. Let’s take a look at the weekly snap counts to see if we can start putting some order to a game that seemed like pure chaos at times.

It was a mostly intact 100% club although with some changes. Cody Ford shifted to the left side at guard in Quinton Spain’s spot. Possibly now “former” spot. Brian Winters took over at right guard. Mitch Morse and Darryl Williams were at their usual center and right tackle respectively. Dion Dawkins left during the final drive and was replaced by Ty Nsekhe. Josh Allen of course played every offensive snap.

Stefon Diggs very nearly made it into the club himself and has seen some fluctuation in this early season with play time percentages of 94%, 79% and this week’s 98%. A calf injury to John Brown prompted an exit from the game, limiting his snaps. Gabriel Davis’s snaps were likely elevated by this change, pushing him past Cole Beasley for the first time.

Tyler Kroft took over for the injured Dawson Knox and had a heck of a game. Lee Smith and Reggie Gilliam both came in for one snap. More notable is the fact that Smith has been inactive the last two weeks. He made the most of his extremely limited time on the field though with a touchdown.

With Zack Moss also sidelined due to injury, Devin Singletary was clearly the featured back over T.J. Yeldon. While Singletary didn’t pile up the yards, he was quite efficient, which could lead to the Bills rethinking their running-back-by-committee approach.

Despite injuries against the Miami Dolphins both Tremaine Edmunds and Matt Milano suited up. Milano returned to the 100% club with Edmunds coming just short. The club was rounded out this week with Jordan Poyer, Levi Wallace and Tre’Davious White. Micah Hyde left with an ankle injury that was quickly taped up so he could return.

Taron Johnson hit 87% of snaps, which is the nickel “floor.” Adding up all the defensive back snaps it looks like another full game of Buffalo Nickel defense. Dean Marlowe’s 13% likely means Johnson only left the field for a small amount of Big Nickel looks.

Quinton Jefferson led the way for defensive tackles followed by Ed Oliver. Oliver saw the most snaps in Week 1, and this looks like it could be game-plan specific. With Harrison Phillips and Vernon Butler added in, the snap counts come out to a perfect rotation for the interior line.

For the defensive ends Jerry Hughes and Trent Murphy led the way. Mario Addison remains the primary depth on both sides of the line. A.J. Epenesa looks to have earned an increase in playing time that was also helped a touch as Mario Addison left the game with a short-term injury.

After three weeks Addison’s role with the team seems to be replicating much of what the team did with Shaq Lawson and Lorenzo Alexander last year. Being the depth on both sides of the line mirrors what Lawson was asked to do. The last two weeks Addison also came in on the interior of the line and as a linebacker at times.

As expected, Tyler Matakevitch stays on top with 79% of special teams snaps. He was followed closely (75%) by Tyrel Dodson. There was a bit of a cliff after that with no other player seeing more than 58%. However the 58% mark was a six-way tie shared by Dean Marlowe, Jaquan Johnson, A.J. Klein, Deon Lacey, Taiwan Jones and Siran Neal. Some variation should be expected moving forward but overall this is likely the group to look for on special teams.