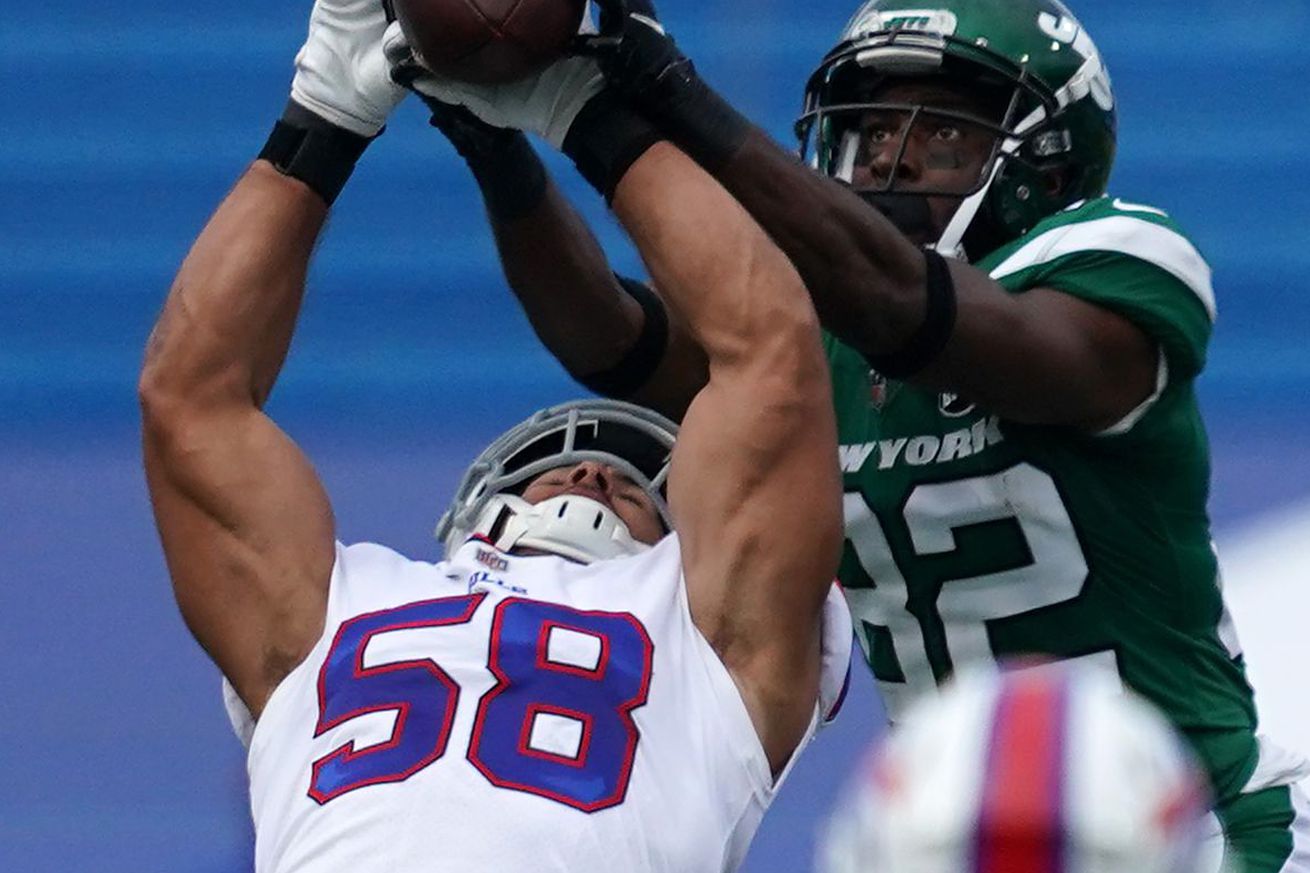 Our weekly look at playing time starts vs the Jets

The Buffalo Bills hosted the New York Jets in the season opener and much of the game felt like coasting. It wasn’t a perfect victory, but it was a convincing one. Let’s check in on who contributed and how much.

I’ll be candid. I was dreading the offensive line this week. I thought there was a real shot at rotation on the right side like last year’s Cody Ford and Ty Nsekhe battle. Until you get a handle on tendencies, there’s a whole lotta spot checking needed to make sure my narrative is accurate. Never to worry though. Ford started at guard and Daryl Williams took over at tackle on the right side. The rest of the line of Mitch Morse, Quinton Spain and Dion Dawkins played as expected. Combined with Josh Allen, this group was the -drum roll- 100% club! Brian Winters, Ryan Bates and Nsekhe all came in for one play each for sub-packages.

Stefon Diggs and John Brown were the top receivers, hitting over 90% each. If you’re shocked by this you’ve probably been deliberately hiding from Bills news. Cole Beasley, Gabriel Davis, and Isaiah McKenzie round out the receiver list in that order which is also expected. Andre Roberts had a couple snaps too, which is also about as expected.

Dawson Knox being the main tight end at 64% isn’t shocking. Essentially ignoring the position aside from Knox is, however. Tyler Kroft and Reggie Gilliam saw just a few reps each, the latter of which is noteworthy after competing at fullback most of camp. With Lee Smith inactive, this suggests a shift in offensive scheme that we’ll keep an eye on moving forward. Last year’s game plans varied quite a bit so Smith might not be a goner, but even his biggest fan (me) can admit this is a big deal.

Devin Singletary was the feature back with 51 snaps. It’s still a bit of a committee approach with the rookie Zack Moss getting 39. Another major shift from last year’s tendencies the math-inclined readers might have noticed is that the two add up to 90 snaps. That’s three more than the offensive total of 87, meaning the Bills ran a few plays with two backs.

The 100% club got off to a shaky start this season with only Jordan Poyer and Levi Wallace hitting that mark. Micah Hyde left and came back with an ankle injury. Matt Milano and Tremaine Edmunds left early due to injuries of their own (fingers crossed for both). Tre’Davious White was pulled late in the game and replaced by Siran Neal. Edmunds and Milano were backed up by A.J. Klein, Tyrel Dodson, and Tyler Matakevitch.

Last year the Bills spent about 75% of their time in nickel defense. Adding up the defensive backs play time you get 500% or the equivalent of spending the entire day in nickel. It’s possible some dime defense sprinkled in means a few reps were in “base” 4-3, but with that nitpick aside call it a nickel day. Say hello to Taron Johnson, starting corner.

As expected, the Bills got a little crazy on the defensive line. I’d suspect you’d need to watch every snap and make notes on who was where. Ed Oliver and Jerry Hughes led the way. Quinton Jefferson and Mario Addison were next up. Behind them were Harrison Phillips, Darryl Johnson, and Justin Zimmer.

Last year’s Lorenzo Alexander Watch might now be the Mario Addison watch. The defensive end group is 32 snaps “short” of the 112 expected (56 plays and two players). The defensive tackle group is three short. Add them together and you get Addison’s 35 reps floating around the line.

There are too many players to list here but to start the season the core group consisted of Tyler Matakevitch, Taron Johnson, Jaquan Johnson, Darryl Johnson, Siran Neal, Tyler Kroft, and Taiwan Jones. Only Matakevitch broke 60% playing time with 69%