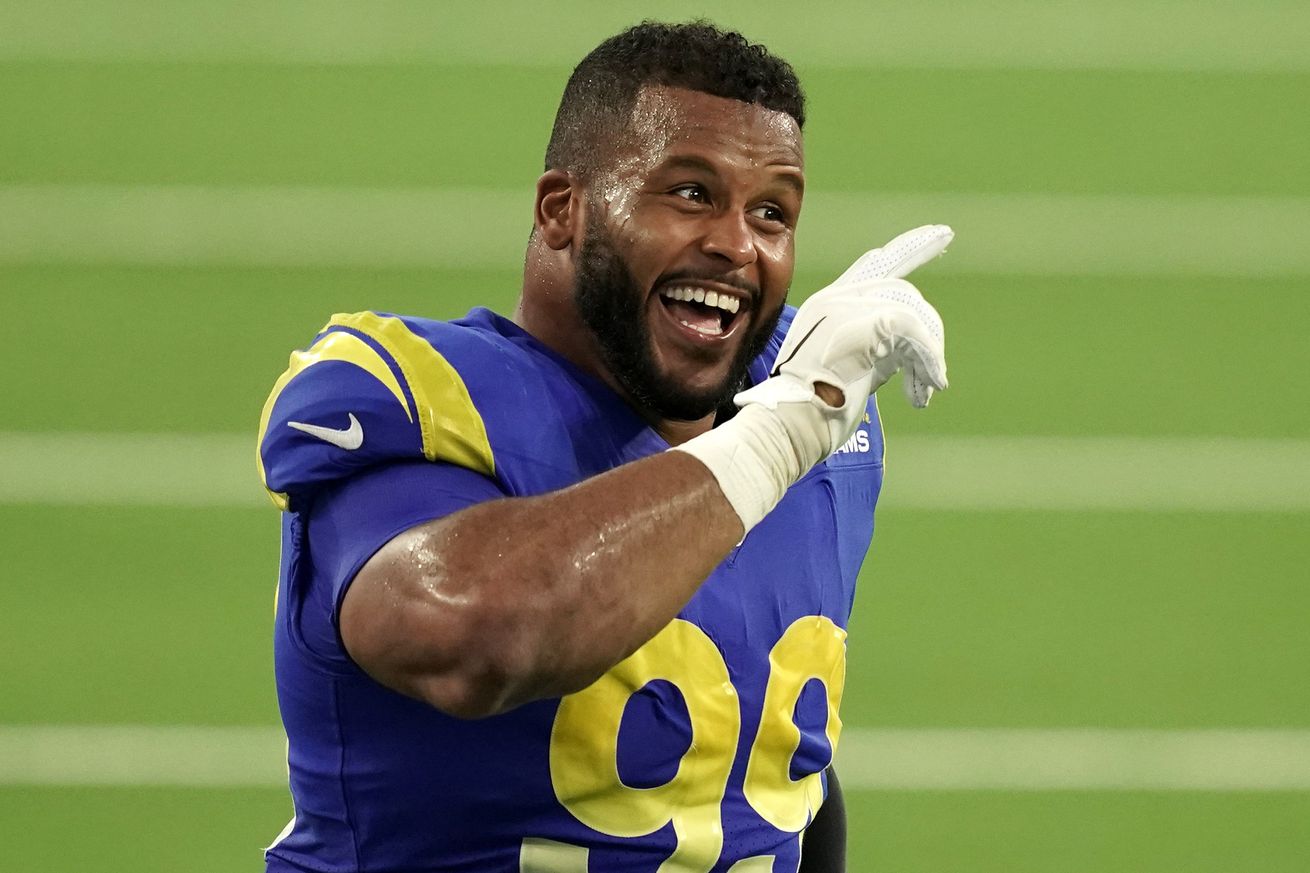 The Bills’ offensive line is about to be tested

For many Buffalo Bills opponent previews I like to check out someone who is a bit of a question mark. Perhaps a rookie. Maybe someone starting for a new team. I like to think these choices add some depth to our knowledge of the opponent.

This isn’t one of those previews. Los Angeles Rams Defensive tackle Aaron Donald has enough accolades where I’m sure every reader knows that he’s good. Really good. On the other hand, the Rams are an opponent we see only once every four years. And even though many of us watch other teams, there’s a big difference between watching a game and focusing on a player. Let’s see what the Buffalo Bills will be up against this Sunday.

One of my favorite moves from defensive linemen is the pull. Let a blocker lean into you a bit too far then yank them off balance. If they stutter step and let go the move worked. If they stumble that’s really good. If they fall down that’s excellent. If they pinwheel around you like a toddler you’re Aaron Donald.

Some of that last play could have been the blocker’s momentum so let’s see if Aaron Donald is really that strong. So far the signs point to yes. I like to stick to current year film which left me with games against the Dallas Cowboys and Philadelphia Eagles. Most of the clips come from the Cowboys game due to their o-line’s reputation. It’s not just the walk back that’s impressive. When Donald wanted to change direction he turns his man’s shoulders and makes it look casual.

Double teaming Donald will need to happen when you can. As good as he is, it will still usually result in decent odds for the offense. That said, the Rams know that too and they’ll try to scheme that away like you see here. Once the help goes away so does this play’s chances.

Aaron Donald isn’t simply a bulldozer either. On the first pause his hands are right up at the top of the arms, which makes it very difficult for his opponent to extend and grab like he wants. It also allows excellent leverage. A small push and a swim and he’s around the first man. A second blocker comes in and has the fortune of catching Donald in a pretty poor stance. Sadly though, there’s a size disadvantage and Donald’s hands are once again perfect. The end result is a scary situation for Dak Prescott as a teammate goes airborne towards him.

Nobody wins every rep and Aaron Donald isn’t an exception. Here we see a similar situation as above where Donald isn’t in perfect position for the play. The right guard has the better hand placement and is able to steer Donald where he wants to. The rest of the Rams shut the play down but Donald wasn’t terrifying on this play.

It looks like his first responsibility on this play is to help clear some blocks for a stunt. I’d say he accomplished this goal. Not only does this collision absolutely wreck two very large adults, Donald is fast enough to get back in Prescott’s face and knock him down too.

I figured I’d show some clips from the Eagles game just to show that the Cowboys simply weren’t having an off day. And let’s be perfectly clear: On this play, there is no way an “off day” leads to this.

I know I said double teams can work and yes that’s true. But there’s a reason that, when asked about his plan to counter Donald, offensive coordinator Brian Daboll quipped “Maybe he can miss the bus.” There will be plays that Donald blows up. Count on it.

Simply put Aaron Donald is one of the best players in the league. Not just at his position. Everyone. For a lot of teams you might spend the week dreading how an elite quarterback will shred your defense. For the Rams it’s Donald wrecking your offense.

The Rams aren’t invincible however. Believe it or not, they were pretty average in both total points allowed and points per drive last year. This year they’ve held both opponents under 20 points but the season is still pretty young. The Cowboys kept it close by limiting the Rams’ offense to 20 and if Buffalo’s defense can return to form, that’s feasible. And Josh Allen thrived with a quick passing game in Week 1, which could help. The Bills should have a shot in this game, but Donald and the Rams probably won’t make it easy.