Lamar Miller will meet with the Bills today, according to ESPN.com’s Adam Schefter (on Twitter). For Miller, it’s a chance to reassert himself after a lost season and get some revenge against the Patriots for dropping him over the weekend. 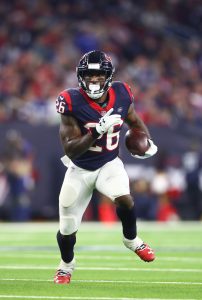 The Patriots opted to forge ahead with Damien Harris, Sony Michel, James White, and Rex Burkhead as their RBs heading into the season. There was some thought that Miller could return to New England as Bill Belichick does his usual roster shuffling. That’s still a possibility, but no one would be surprised to see Miller land a deal in Buffalo if he’s healthy.

As it stands, the Bills have Devin Singletary as their primary back, followed by third-round pick Zack Moss, T.J. Yeldon, and Taiwan Jones. Miller, meanwhile, offers tons of experience and impressive credentials. In 2018 – his last healthy season – Miller notched 973 rushing yards, averaged 4.6 yards per carry, and five rushing touchdowns. He also added 25 catches, 163 receiving yards, and one TD through the air for good measure en route to a Pro Bowl nod.