For the second time this year, the Bills are meeting with Eli Ankou (Twitter link via WGR’s Sal Capaccio). The defensive tackle last visited Buffalo in May and could finally join them this summer if all goes well. 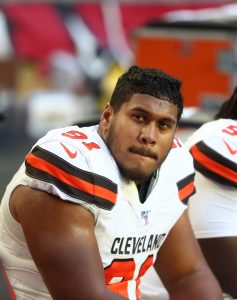 Shortly after his trip to Buffalo, Ankou signed with the Falcons. However, that deal didn’t last long — Atlanta dropped the 327-pound lineman after a few weeks.

Ankou, a former UDFA out of UCLA, started his career with the Texans. After getting cut by Houston he was claimed by the Jaguars, and played a sizable role in Jacksonville as a rookie. In nine games in 2017, he had 15 tackles and a sack and a half as a rotational run defender.

He remained with the Jags up until the Browns signed him off the practice squad in October 2019. He wound up making two starts while appearing in nine games for Cleveland that year. Ankou then had a short stint with the Colts, was waived, claimed by the Texans, and then traded to the Cowboys in November of last year.

He finished the 2020 season in Dallas, and played around a third of the defensive snaps in the seven games he was active. Still only 27, Ankou offers size and intriguing upside as a run-stuffer.