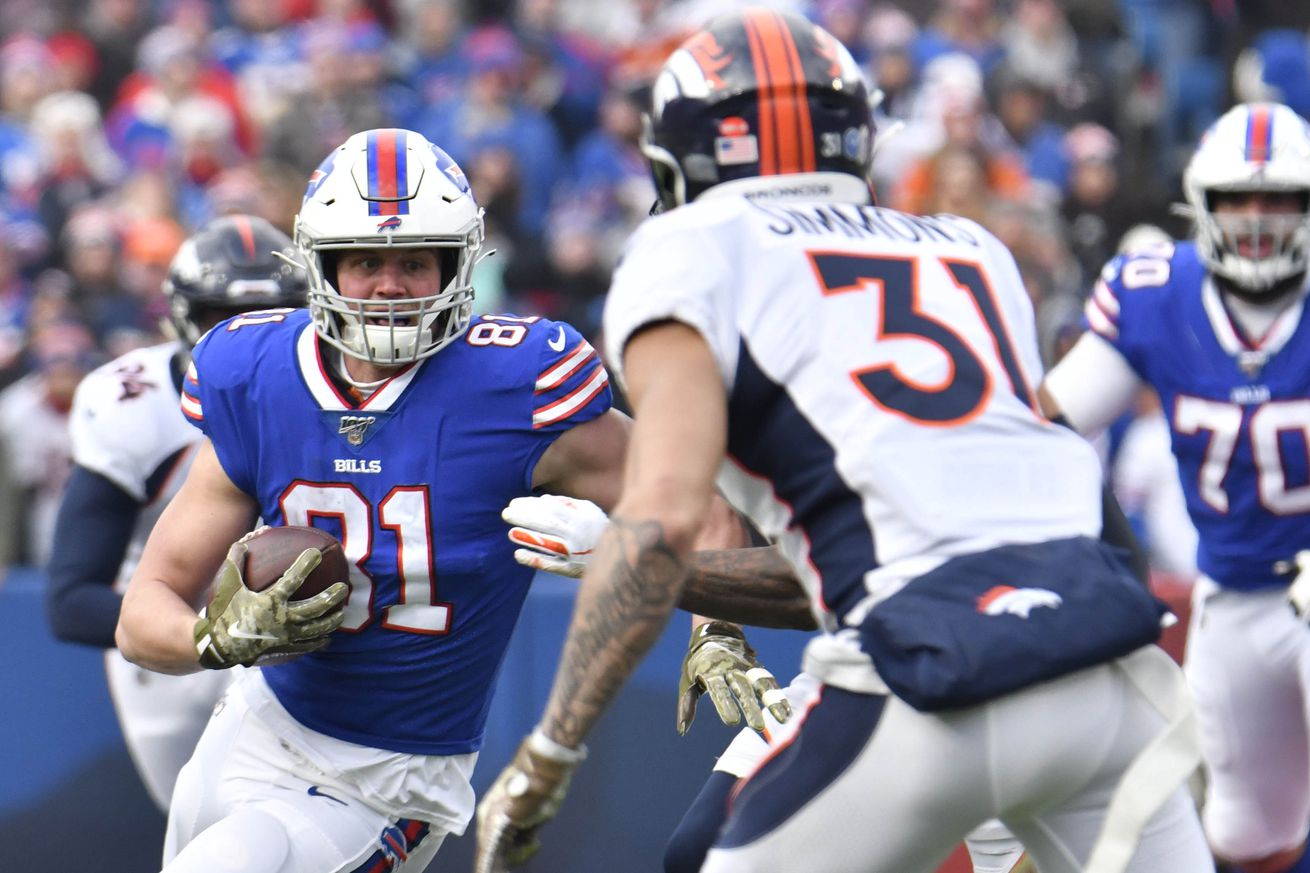 The Buffalo Bills received some good news on the injury front when wide receiver Stefon Diggs returned to practice Monday. But in today’s edition of the Bills daily links, we discuss the growing list of Bills who are sitting out with various injuries. The list includes wide receiver John Brown and defensive end Quinton Jefferson, who are out with illnesses that are not believed to be COVID-19-related, along with defensive tackle Vernon Butler, tight end Tyler Kroft, guard Quinton Spain, cornerback Josh Norman and more.

We also offer up the latest 53-man roster prediction, examining whether an outstanding training camp can be enough to secure a spot for wide receiver Isaiah McKenzie, and whether cut candidates like defensive end Trent Murphy, linebackers Vosean Joseph and Tyrel Dodson, and guard Brian Winters will make the roster.

We explore the “leap of faith” the Bills are taking in handing the kicker job to rookie Tyler Bass, dissect what the Bills will do on the right side of the offensive line, analyze what newly acquired linebacker Andre Smith brings to the linebacking corps, hear from Bills players on why they are choosing not to wear the NFL’s recommended face shields, identify which Bills you should be targeting in fantasy football, and much more!

Buffalo Bills injury report grows on Monday; Stefon Diggs set to return from back ailment – newyorkupstate.com
Quinton Jefferson and John Brown out with illness not believed to be COVID-19-related at this point, per head coach Sean McDermott.

Bills’ ‘leap of faith’ in going with rookie Tyler Bass rooted in trust | Buffalo Bills News | NFL | buffalonews.com
With no preseason games due to the coronavirus pandemic, the practice field was the lone battleground for the team’s most noteworthy competition of the summer.

Bills roll the dice, entrust rookie Tyler Bass to make big kicks – Democrat & Chronicle
The Buffalo Bills drafted Tyler Bass in the sixth round because they believed he could upgrade the kicking game. Now, he gets his chance.

Bills ‘still looking at some things’ on right side of offensive line | Buffalo Bills News | NFL | buffalonews.com
The primary cause is a pectoral injury that will take starting right guard Jon Feliciano out of the lineup for a prolonged stretch. But there’s also concern about what to do at right tackle.

Andre Smith: 5 things to know about new Buffalo Bills LB – newyorkupstate.com
Smith was acquired by the Bills for a 2023 conditional draft pick.

Bills trade for LB Andre Smith – BuffaloBills.com
The Bills traded a conditional pick in 2023 for a linebacker on Monday.

Bills Today | One reason the Bills secondary is one of the NFL’s best – BuffaloBills.com
Here are three things to know about the Bills for Tuesday, Sept. 1.

3 things we learned from Sean McDermott about the 2020 preseason – BuffaloBills.com
Two players miss practice with illnesses, evaluations continue on the offensive line, and a change in routine following camp.

Sean McDermott: “It’s a Next Man Up Mentality” – BuffaloBills.com
Bills head coach Sean McDermott discusses surprises and standouts during the offseason and during training camp, the injury list and the health of the team through camp, and player development as camp progresses.

Buffalo Bills Fantasy Football preview 2020: Sleepers, busts, value picks, who to avoid, rookie to watch – newyorkupstate.com
The Bills’ offense is expected to be much improved in 2020. Here are some of the players you should target in drafts.

Newton vs. Allen: Which AFC East QB would you want when a play breaks down? – BuffaloBills.com
The “Good Morning Football” crew discusses whether Josh Allen or Cam Newton is the QB they would want to have when improvising on a play.

Dean Marlowe: “Approach Every Day Like a Starter” – BuffaloBills.com
Bills safety Dean Marlowe discusses how he can fulfill his role in the Bills’ secondary, what he’s seen in younger players like Cam Lewis, Josh Thomas and A.J. Epenesa, and more.

Levi Wallace: “Take Advantage of All the Reps” – BuffaloBills.com
“Cornerback Levi Wallace addressed the media on Monday topics include; learning and competing with CB Josh Norman, the possibility of playing without fans, and having one more week to impress the coaching staff.”

How much time does Buffalo Bills’ coach Sean McDermott have until his seat turns hot? – Buffalo Rumblings
Is it somewhere between Marvin Lewis and a New York Jets Bill Belichick?

Billieve: Predicting the Buffalo Bills’ 53-man roster – Buffalo Rumblings
Who’s in, who’s cut, and who are the surprises to make the roster?