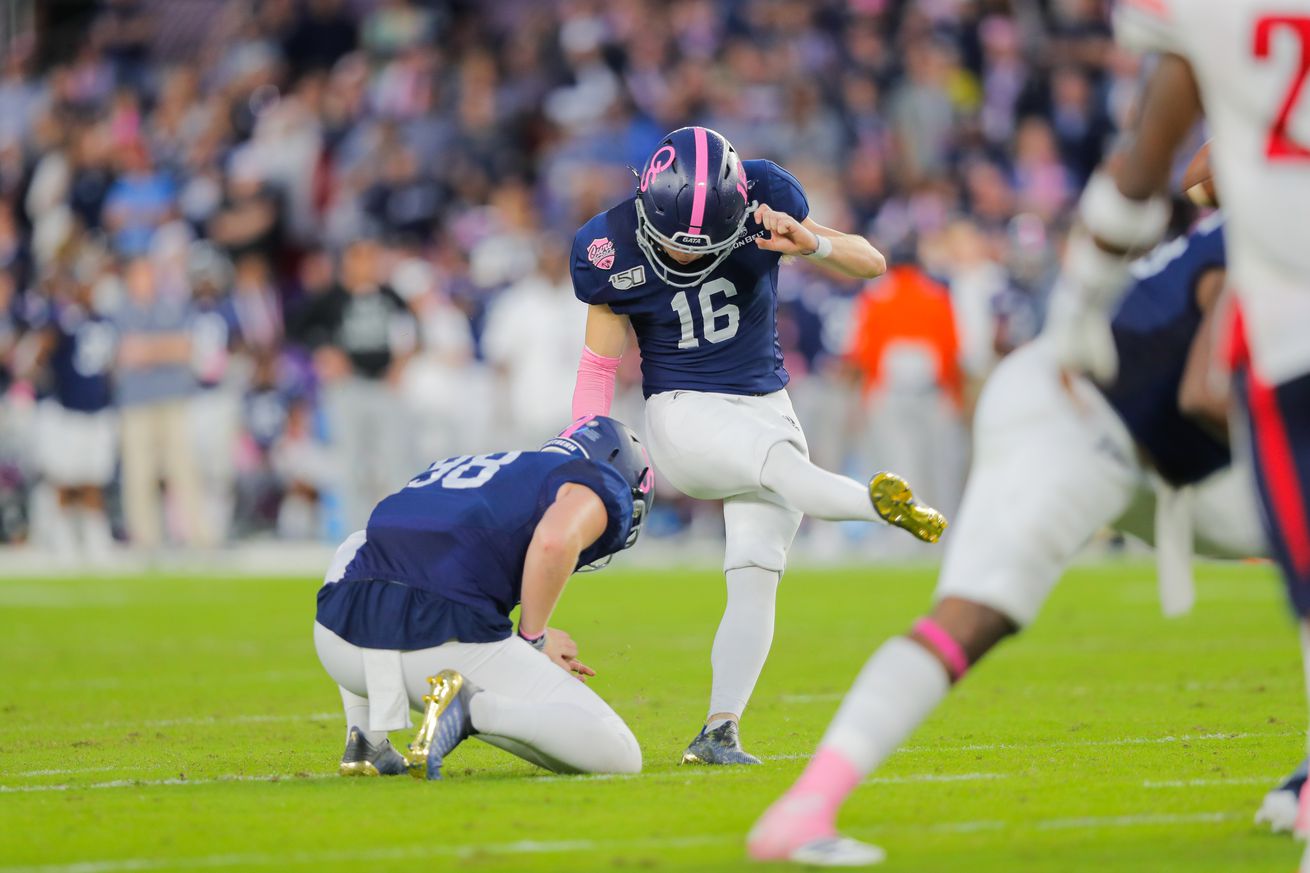 Plus, Josh Allen and the offense struggle vs. the first-team defense Sunday at camp.

The Buffalo Bills have a new place kicker in rookie Tyler Bass, and in today’s edition of the Buffalo Bills daily links, we break down how Bass was able to beat out incumbent Stephen Hauschka, and how his performance during the team’s intra-squad scrimmage helped cement his bid for the starting job.

Rookie Tyler Bass will rely on this advice after winning the Bills kicking competition – BuffaloBills.com
The rookie kicker talks about how his grandmother played a pivotal role in his career development and why he’s prepared to handle the Bills’ kicking duties in 2020.

Tyler Bass: “Earn that Respect” – BuffaloBills.com
Bills kicker Tyler Bass discusses how he’s developed his mentality and confidence throughout his life, his background as an underdog throughout his football career, the worst weather he’s ever kicked in, and what it took to win the starting job.

Cole Beasley, Gabe Davis and Dean Marlowe made plays on Sunday – BuffaloBills.com
The Bills held their final open practice for the media on Sunday. Defense continues to impress and Gabriel Davis is still making plays.

Observations: Devin Singletary shows burst as Bills’ RB battle stays hot | Buffalo Bills News | NFL | buffalonews.com
The competition for snaps at running back looks like it will be heated between Devin Singletary and rookie Zack Moss heading into the regular season.

Bills Mailbag: What are Trent Murphy’s chances of making the 53-man roster? | Buffalo Bills News | NFL | buffalonews.com
The Bills Mailbag addresses whether Trent Murphy will be a cut candidate, whether the Bills will bring in another offensive lineman, if Bills fans should be worried about Cam Newton, and more.

Bills Today | Offensive line competition heads into the final week of preseason practices – BuffaloBills.com
Here are three things to know about the Bills for Monday, August 31.

Inside the BIlls: Q and A with Dion Dawkins on his new deal, racial unrest and more | Buffalo Bills News | NFL | buffalonews.com
The Buffalo Bills’ newly appointed franchise left tackle signed a lucrative contract extension earlier this month—a four-year deal that could be worth nearly $60 million.

20 contenders for the 2020 NFL season, 20 big weaknesses – Ranking the Achilles’ heels -ESPN.com
Every team has a weakness, even the Super Bowl favorites. How worried should the Bills and their fans be about their biggest weakness?

Antonio Williams: Bills to re-sign UDFA running back (sources) – newyorkupstate.com
Williams has been working as a student assistant coach at UNC.

Josh Allen and Dion Dawkins are leading by example this training camp – BuffaloBills.com
Offensive coordinator Brian Daboll spoke to Josh Allen’s growth and what he wants to see out of the offense after almost two weeks of training camp practices.

Bills Mafia, crowd noise may not affect home-field advantage as much as you think | Buffalo Bills News | NFL | buffalonews.com
NFL teams collectively produced a 132-123-1 record (.518 win rate) at home last year, the lowest home win rate since the league expanded to 32 teams in 2002.

The Comeback, No. 10: A backup QB, a gutsy call and a march to history for Buffalo – The Athletic
The Bills’ win sustained a run of four straight Super Bowl appearances that, like the 32-point comeback, remains unmatched in NFL history. (Subscription required).

Billieve: Predicting the Buffalo Bills’ 53-man roster – Buffalo Rumblings
Who’s in, who’s cut, and who are the surprises to make the roster?

Buffalo Bills 2020 training camp practice recap, August 30 – Buffalo Rumblings
It was a mostly down day for the offense on Sunday.

2020 win totals: Why over, why under for the Buffalo Bills – Buffalo Rumblings
Why will the Bills be over their projected win total and why they will be under.