The Bills are set to be without one of their top special-teamers to start the season. Andre Smith received a six-game suspension Wednesday for violating the NFL’s performance-enhancing drug policy, Ian Rapoport of NFL.com tweets. 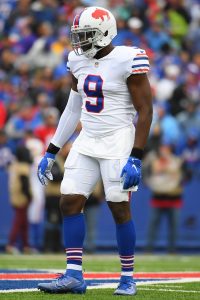 Acquired via trade from the Panthers just before the 2020 season, Smith re-signed to stay with the Bills last year. His contract, which runs through 2022, calls for a $1MM base salary this season. Barring a successful appeal, Smith stands to miss out on a chunk of that.

A former seventh-round Carolina draftee, Smith has been strictly a backup and special-teamer as a pro. The 25-year-old linebacker played 47 defensive snaps in 2020 and did not log any last season. But the ex-North Carolina Tar Heel was on the field for 68% of the Bills’ special teams plays in his fourth NFL campaign. Smith made 10 tackles and recovered a fumble last season, playing in 15 Bills regular-season games and both their playoff tilts.

The Bills have one of the NFL’s deepest rosters, and they added to their group of part-time linebackers by using a third-round pick on Terrel Bernard. The team returns Tyler Matakevich and brought back Marquel Lee.