A loyal Bills fan went viral for painting their house with the team’s logo, but the reasoning was what really stood out.

This fan was just…claiming their territory, literally.

The decision to paint the side of their home was made in response to his neighbor flying a New York Jets flag. Western New York resident Michael Mansfield has a friendly rivalry with Jets fan Eric Jensen, which began when Jensen first moved into the area.

Reported on by WHAM-TV in Rochester, the story soon went viral, which happened to catch the attention of PepsiCo. When the company saw the neighbors’ story, they wanted to celebrate Mansfield and his unapologetic love for the Bills. The brand did that and more. Pepsi reached out publicly via Twitter with an offer to make a commercial and some billboards if the post reached 1,000 retweets (albeit unbeknown at first to Mansfield).

Hey Michael – We like your style. Let’s take this rivalry city-wide. Want to make your own commercial and some billboards around Rochester to really rub it in your neighbor’s face? 1,000 RTs on this tweet and it’s on! #BillsMafia https://t.co/EWAVMGV4kG

From his village block in Bloomfield, NY, into the heart of the city of Rochester, Pepsi’s response caught the eye of Bills faithful who came through in support on his behalf, surpassing that 1,000 number easily.

“As soon as we heard the news about Michael’s unapologetic love for his football team, the Buffalo Bills, we knew we had to get involved,” said Nancy Gold, Marketing Manager, PepsiCo Beverages North America (North Division).

Looks like Bills fans will be supporting Pepsi now: 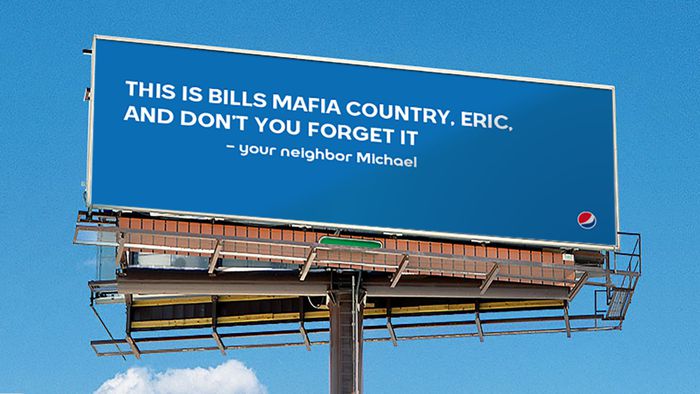 Bills LBs Tremaine Edmunds, Matt Milano both out vs. Dolphins

NFL Next Gen Stats shows how strong Bills’ D-line was vs. Jets