The Bills will travel to Las Vegas to play the Raiders and look to start the season 4-0 for the first time since 1992. Here are my keys to the game, plus notes and stats.

The Bills had a tough time stopping the run last week against the Rams, giving up 167 yards rushing and 5.2 yards per-carry. The big, physical Rams offensive line dominated them at the point of attack. The Raiders also have a big and physical line and are averaging 125 yards per game on the ground. Josh Jacobs is sixth in the league with 252 yards rushing on the season. Especially with two staring wide receivers likely out, Las Vegas will probably look to establish the run and push the Bills around. The Bills defense has to be better than they were last week and not let that happen.

The Raiders defense is fast and athletic. They can get there quickly and make plays. But also very susceptible to misdirection and screens because of that. They over-pursue too much, and also miss a lot of tackles. Last week against the Patriots, they did a really good job defending QB Cam Newton’s running, but I felt they concentrated a little too much on him which is why the Patriots’ running backs ran for over 200 yards. Bills RB Devin Singletary is a magician in the open field, causing a lot of missed tackles. The Bills already run plenty of misdirection and play-action, so a heavy dose of all of that Sunday will really give them a chance to make some big plays.

• Time to break one

The Raiders have punted eight times this season. Four of those punts have been fair caught. One went out of bounds. The other three were returned 10, 11, and 19 yards by their opponents. So, they are averaging 13.0 yards per punt return against, which ranks 30th in the NFL. Enter Andre Roberts. The Bills return man leads the NFL with 86 total punt return yards and ranks third in the league with a 12.3 yard per return average. This game sets up for Roberts to possibly have a big-play in the return game. 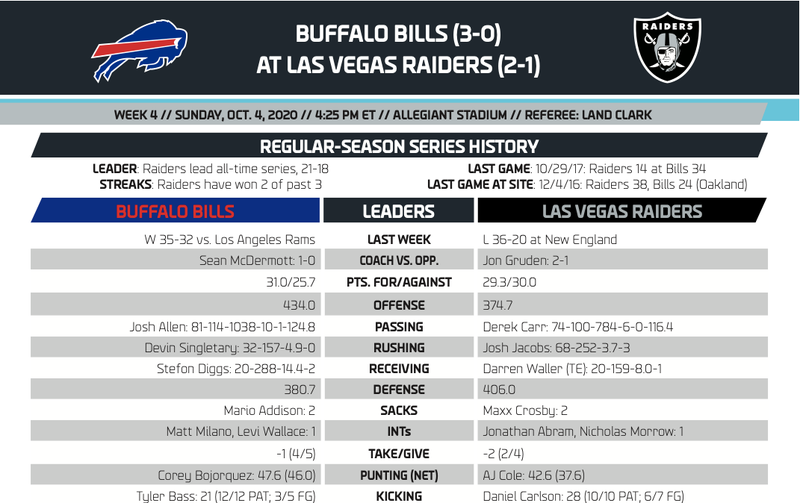 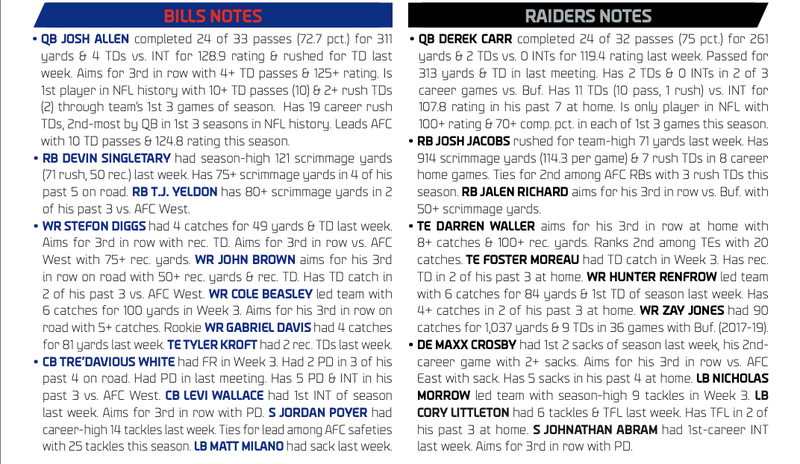