The Bills head to South Florida banged up on defense as they try to get to 2-0, facing the Miami Dolphins. Here are my keys to the game, plus notes and stats:

It’s usually “next man up,” but in this case it’s men, as in multiple linebackers. The Bills will be without both starters in Matt Milano and Tremaine Edmunds. One of their backups (although primarily a special teams player), De’Shawn Phillips, will also be out. AJ Klein and Tyrel Dodson are expected to start in their spots, with Tyler Matakevich as the lone healthy backup from the usual active roster. The team activated both Deon Lacey and Andre Smith from the practice squad Saturday afternoon. Both are primarily special teams players but may have to have a role at linebacker, as well. It will be vey interesting to see how the Dolphins attack and test that unit, and how they respond could go a long way towards the outcome of the game

The Bills struggled to run the ball with their running backs last week against the Jets.  Devin Singletary and Zack Moss combined for only 60 yards. The Dolphins struggled to stop the Patriots from running the ball.  New England went for 217 yards on the ground, using a combination of six different ball carriers. Every one of them had at least 22 yards rushing!  So either the Bills will get their running game straightened out or the Dolphins will continue their woes defending it.

In four career starts against Miami, Bills QB Josh Allen has dominated the Dolphins. Here are his numbers: 913 yards passing with 10 touchdowns and 3 interceptions, for a 102.8 passer rating; 318 yards rushing, 10.97 yards per carry and 3 touchdowns, which is all good for 1,231 total yards, 13 total TDs and over 307 yards per game. Allen may have to keep the types of numbers up in this one considering the injuries on defense and Miami maybe having more chances to score, but also because Dolphins QB Ryan Fitzpatrick has played well against the Bills (68.7%, 605 yards) and could always get hot and force the Bills to keep up. 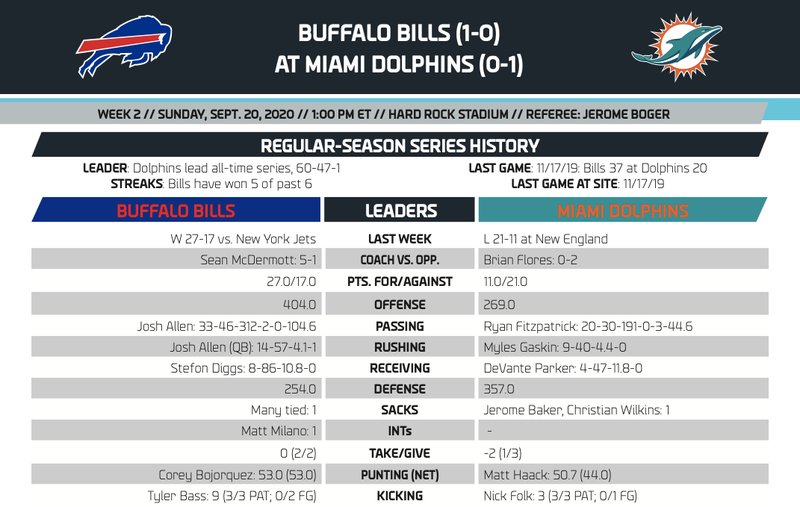 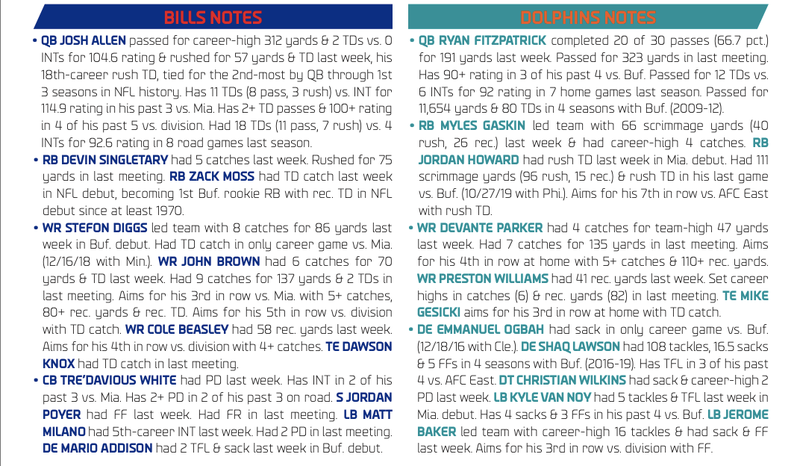