The Buffalo Bills travel to Glendale, Arizona to take on the San Francisco 49ers in the team’s first official Monday Night Football appearance since Oct. 29, 2018.

Here are my three keys to the game, plus notes and stats.

49ers wide receivers Deebo Samuel and Brandon Aiyuk will both be on the field for only the fifth time this season, and the first since Oct. 25.

Since then, in the two games Aiyuk played without Samuel, he totaled 15 catches for 166 yards and two touchdowns. In the one game Samuel played without Aiyuk, he grabbed 11 passes for 133 yards.

Now, the Bills will have to figure out a way to cover both of them, including as runners. Between the two of them, Samuel and Aiyuk have carried the ball 11 times for 75 yards and two touchdowns on the season.

2.) Take what they give, especially with Cole Beasley

Josh Allen and the Bills have been missing the big play on offense without wide receiver John Brown.

Teams have played a lot of zone defense and forced them to throw short and underneath. Expect the 49ers to do the same. San Francisco already plays mostly zone defense, but has a below-average pass rush by NFL rankings (19th in sacks per-pass attempt) so they’ll most likely make Allen and the Bills work for everything they get.

The Bills need to be patient and take those yards. Allen can’t force things like he’s tried to, at times, including last week, resulting in turnovers. He should look to slot receiver Cole Beasley quite often, considering that style of defense should give him opportunities. In addition, the 49ers are down to their third-string slot cornerback due to injuries, and maybe even fourth-string if Emmanuel Moseley can’t play. He’s questionable with a hamstring injury.

The Bills haven’t scored a defensive touchdown since December of 2017. They’ve gone 45 straight games without one, the longest current drought in the NFL. Monday night would be a great time to get one, to help an offense that will be going against the league’s 11th-best scoring defense.

Even if it’s not a touchdown, the Bills defense has a chance to make a big play against the 49ers passing game. San Francisco ranks 22nd in the league in sacks per-pass attempt allowed, and tied for 27th in interceptions thrown per-pass attempt.

A big sack, maybe even causing a fumble, or an interception, could go a long way in being the difference in this game. 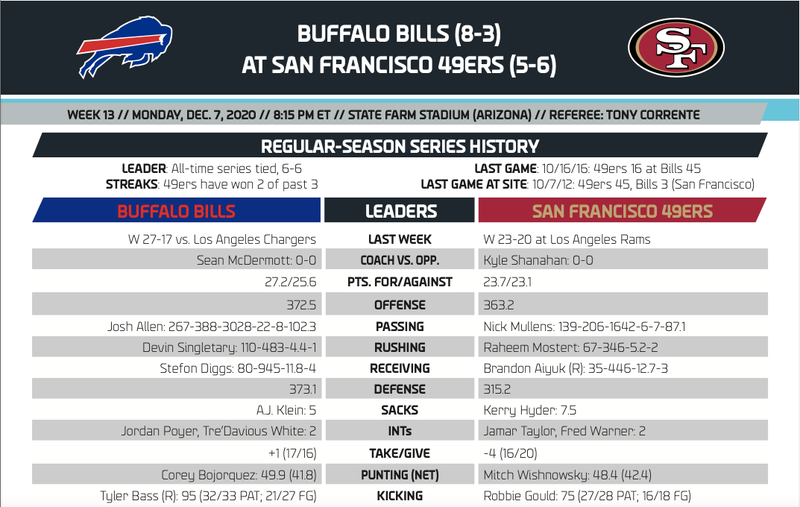 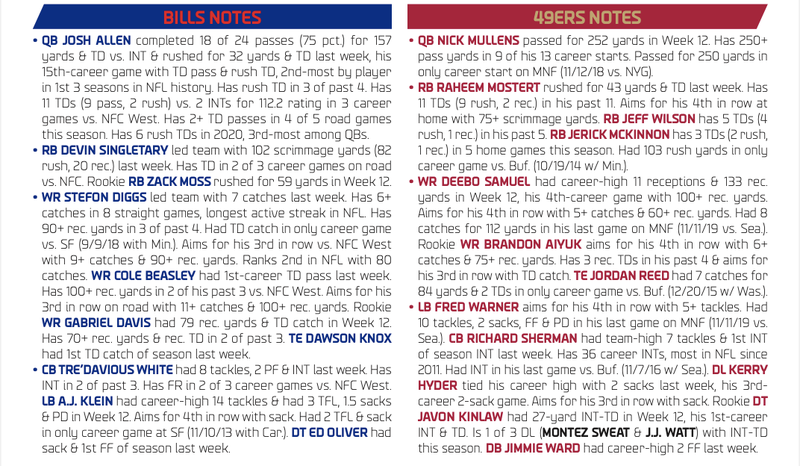