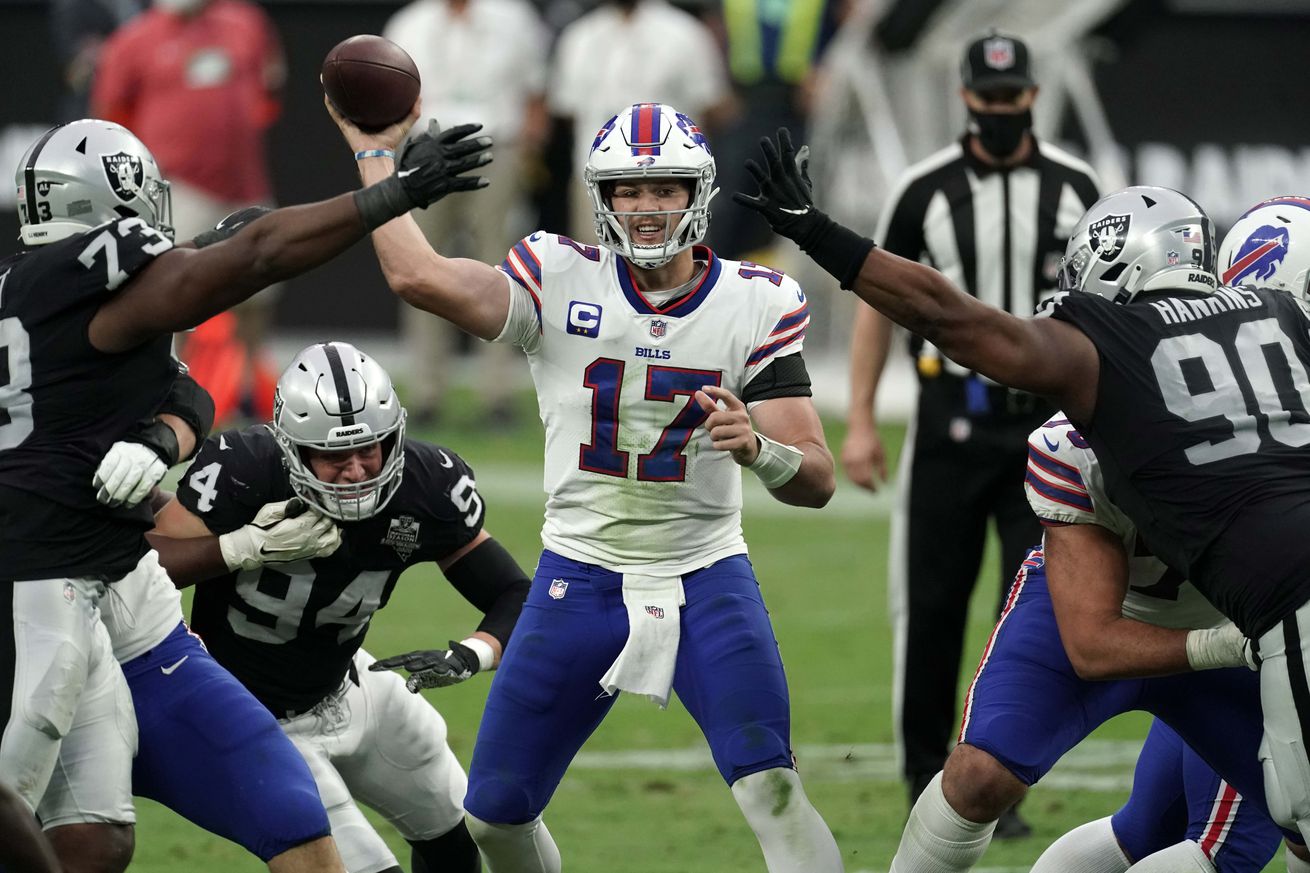 The Buffalo Bills anointed Allegiant Stadium with its first Raiders loss, in a 30-23 win that saw the Bills steadily dispatch Las Vegas in their home turf. Josh Allen played great, if not transcendent, with 24/34 passing for 288 yards and two touchdowns, adding a one yard rushing touchdown. That we’re talking about a day with three touchdowns and 288 yards as “good” is just a reminder of the high standard Allen has set this year. Facing a beaten-up Raiders offense, the Bills defense failed to shut the group down, but ultimately rose to the occasion to give Buffalo a straightforward path to victory.

The Bills offense continues to be a shining star in the first half. Buffalo scored on all three of its drives, with two touchdowns and a field goal. This year, they average 19 points scored in the first half. The defense, in comparison, held Las Vegas to two field goals on their first two drives, but did surrender a surgical touchdown drive in the closing seconds of the half. If that sounds somewhat familiar, the Bills also gave up field goals in the two minute drill against the Jets and the Dolphins.

Late in the second quarter, the Bills nation collectively swore at their televisions, after Josh Allen, clutching his left arm awkwardly, jogged into the locker room. He’d suffered a shoulder injury after taking a late hit. Luckily, everything was okay. Allen returned before the second half, and played the remainder of the game.

Buffalo’s third quarter woes continue – outscored 24-7 in the first three weeks, they failed to score points again, and allowed a nearly seven-minute field goal drive by the Raiders. If anything, Buffalo was saved by Jon Gruden’s conservative nature. On 4th and 2 from the seven yard line, Gruden kicked the field goal. Had Las Vegas scored a touchdown, they’d lead 20-17. Instead, they trailed 17-16. Buffalo never surrendered the lead in this game.

One key play changed the nature of Buffalo’s defense in the fourth quarter. Leading the way was newcomer Josh Norman, with a textbook punch to force a fumble, then rolling onto it himself for the turnover. That play, Buffalo’s first turnover in four quarters, appeared to finally wake up the defense.

The next series saw the unit playing with their familiar higher intensity, and Ed Oliver blew up a 4th and 1 running play to give Buffalo the ball in Raider territory. The Bills offense failed to capitalize (a rare occurrence this year), but on Las Vegas’s next drive, Quinton Jefferson stripped Derek Carr in the pocket and recovered the fumble for another turnover. Three drives, three turnovers forced.

Sadly, that attitude didn’t last. With the Raiders taking over on a four-minute drill, Buffalo gave up a nine play, 80 yard touchdown drive that cut their lead to seven points. Instead of Buffalo turning in their best scoring defense of the season, they finished with a milquetoast 23 points allowed.

Ultimately, though, the Raiders still needed an onside kick to try and finish their comeback, and it wasn’t meant to be. Jaquan Johnson recovered the ball, and Buffalo finished with the victory formation. 4-0, the Bills now look ahead to an uncertain showdown with the Tennessee Titans – who are dealing with a COVID-19 outbreak at home.

Allegiant Stadium was host to a MASH unit Sunday, with both teams losing several players to injury. By the fourth quarter, teams were adjusting their schemes to account for the lack of personnel.

Josh Allen took a hard hit in the second quarter and banged up his shoulder. The initial outcome looked scary, and Allen jogged into the locker room after the play, but he did return to play out the remainder of the game. Crisis averted.

Levi Wallace injured his ankle in the first quarter and didn’t return to the game. The Bills replaced him with Josh Norman, who forced and recovered a fumble in his season debut.

Cole Beasley, with a leg injury, was questionable to return to the game in the second half, but came back to play before the day was done.

Matt Milano came off the field with a pectoral injury early in the fourth quarter. Tyrel Dodson replaced him in the lineup.