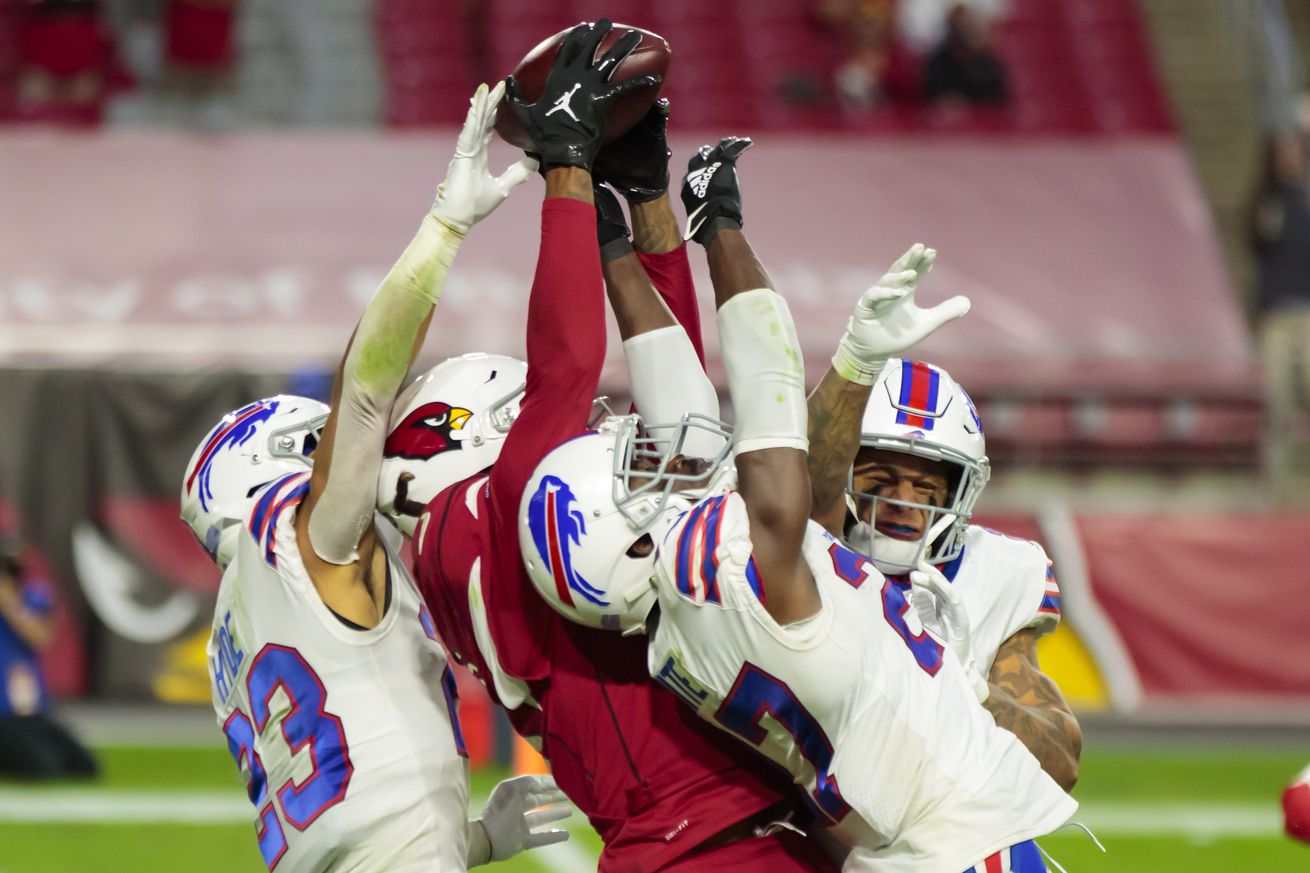 The Bills lost this one in heartbreaking fashion.

What a ridiculous game. What an incredible, bittersweet ending. Viewers of the Buffalo Bills versus the Arizona Cardinals hoped to witness two rising teams and two young quarterbacks in a dynamic showdown. Well, it manifested. Mere moments after Stefon Diggs’s miraculous touchdown catch gave the Bills a 30-26 lead over the Cardinals, Kyler Murray rolled left, threw a rainbow into a sea of Bills defenders, and DeAndre Hopkins iced the game with a comeback touchdown of his own. By a score of 32-30, the Cardinals sealed the deal and beat Bufalo. For Bills fans, it was a journey from ecstasy to agony.

For nearly the entire game, the Bills’ defense did everything they could to contribute to a win. The Cardinals got theirs—two rushing touchdowns from Kyler Murray, a whopping 217 rushing yards—but Buffalo shut them down in the clutch. They generated two turnovers. They forced two field goals at the goal line. But Murray-to-Hopkins, the 43-yard touchdown that closed out the game, will sadly be the cover photo to memorialize this game. Tre’Davious White, Jordan Poyer, and Micah Hyde were all there to try a stop—but it didn’t matter in the end. The defense deserves a lot of credit for their efforts to contain Murray as a running threat, and they mostly contained him as a passer, too. Sacking him isn’t easy, but they did it three times—and swatted away six passes. As the broadcasters mentioned often in this game, defending the Cardinals’ offense is like balancing on a razor’s edge. You play with utmost concentration, knowing you’re one step away from giving up a touchdown. For the Bills, that one play came at the very end of the game.

Special teams was a mixed bag. First of all, we have to give a shoutout to Tyler Bass for having an incredible day. The rookie was perfect hitting on a 54-, 55-, and 58-yard field goal in the first half. Perfect on extra points. He’s a huge factor in the final score. For Andre Roberts, it was an up-and-down day. His first kickoff return, for 40 yards, gave the Bills great field position to start the game. His other three returns were all tackled in minus territory. Corey Bojorquez is going to regret his poor performance in an otherwise great season. He shanked a 12-yard punt in Buffalo territory to set up Arizona’s first touchdown. He kicked a touchback when the Bills could’ve used the field position, and another long punt outkicked the coverage and led to a 23-yard return.

But a major story of this game was how Josh Allen struggled, as did the Bills running game, and that Allen’s play mainly improved thanks to his receivers bailing him out. Through three field goal drives in the first half, and only a single score on the first six drives of the second half, Allen wasn’t able to open up Buffalo’s lead wide enough to secure the win. Yes, Allen gets credit for his final drive, especially his clutch throw to Diggs with the clock winding down. But Allen only threw for 5.8 yards per attempt, and had two picks to go along with his two touchdown scores—and he could’ve easily had two more interceptions.

As nice as it was to see four drives for four scores in the first half, the offense wilted in the second half. Four punts, two turnovers, and a single touchdown before their final drive started. Zack Moss and Devin Singletary were total non-factors in this game: 13 touches, 27 yards. Singletary deserves to be called out for two negative plays: a dropped screen pass that could’ve bailed the Bills out of a sputtering drive, and an unnecessary roughness penalty when Allen was just looking to throw the ball away at him. The offensive line deserves credit for leaving Allen without a single sack tonight, but they could not sync up a run for the life of them.

The main reason the Bills’ offense stayed alive so long in this game? Their trio of receivers. Cole Beasley was there every time the Bills needed him, pacing the group with 11 catches for 109 yards and a touchdown. Stefon Diggs had 10 for 93 and a would-be game winning touchdown. John Brown had 6 for 72, and another nice catch was negated by penalty. When Allen was struggling for answers, his receivers were earning tough yards after the catch.

Speaking of tough, it’s going to be an uncomfortable flight home for the Bills. Now 7-3 heading into their bye week, the team is bruised and feeling down, but they’re still leading the AFC East. From here, they just need to do their job down the stretch and they’ll have the division crown for the first time since 1995.

A.J. Epenesa suffered a concussion in the closing minutes of the first half, and didn’t return to the game after that. The Bills adjusted their defensive line rotation accordingly with more Darryl Johnson and Trent Murphy.

Rookie cornerback Dane Jackson suffered a right knee injury in the third quarter. The Bills were already thin at cornerback, with Josh Norman and Levi Wallace on COVID-19 reserve. So Daryl Worley, promoted from the practice squad, took over from there. Jackson later returned to the game.

John Brown, making a desperate catch in the fourth quarter, fell awkwardly and needed help getting to the sideline. With a right ankle injury, he didn’t come back in the game.