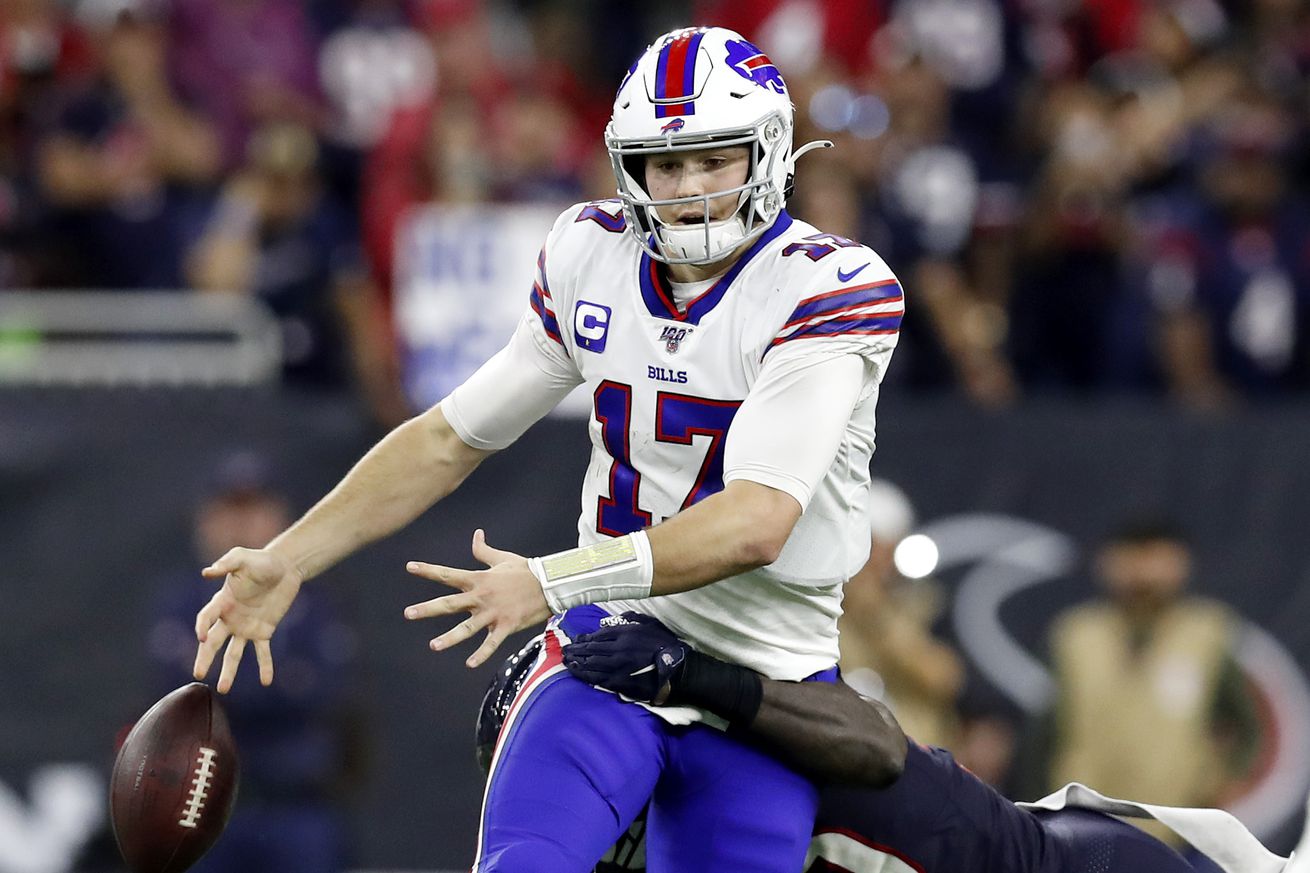 A critical look at Josh Allen’s case of fumbleitis

I know, I know. We all love Josh Allen. He has a cannon for an arm. He looks good in shorts. I understand—but the fumbles! Man, it would be nice if he got those under control. Allen had 14 in the regular season, which was the third-highest in the league among quarterbacks, only behind Daniel Jones and Carson Wentz. Let’s crack open a nice cold can of tape and see if there’s anything it can teach us about the fumbling issue.

Interestingly enough, Josh Allen lost only four of the 14 fumbles he had in the season. We’ll start with those and see if there’s a common thread. For the first lost fumble of the season in Week 1 Allen is trying to secure the ball but a heck of a swat dislodges it. Allen is unable to recover it due to being further mauled on the way to the ground.

The second one of the season also occurred in Week 1, meaning the New York Jets recovered half of Allen’s lost fumbles during the regular season. This one seems to be a timing issue as Allen’s hands are up faster than the ball. Was Allen too fast? Was Morse too slow? It doesn’t actually matter a whole lot as there’s no reason to think it can’t improve with practice.

This one seems a little fluky. Tyler Kroft has a head of steam and jars Josh Allen hard with his hip right in the sweet spot. Allen again tucked the ball to run with it as well.

This is the one that I personally blame Allen the least on. He’s looking to throw and gets demolished from behind. Sometimes you’re gonna lose the ball like that. With Plays 1 and 3, there is a potential question of how well he’s actually tucking the ball, and in Play 2 it’s possible Allen’s hands were the issue.

This is our first of a few samples of fumbles that weren’t lost just to see what other issues might creep into the picture. For this play Allen’s not a receiver, he’s not wearing sticky gloves, and it falls mostly on Mitch Morse.

Another timing issue, this time with tangled feet. You can definitely argue Allen’s ball security as plenty of players manage to keep the ball going to the ground, but the extended arms to fake the hand off increased the difficulty.

And here’s another where Allen has the ball tucked but a hit dislodges it anyway. While a decent amount of fumbles were attributable to slapstick-esque gaffes, this was also a pattern to be aware of.

One more for the road. Most of the stats are based on regular-season play but we can learn a bit about how fumbles happen during the playoffs too. Josh Allen fumbled twice against the Texans, the first of which is shown above. Was contact made with the ball? The way it moves looks like it, but none of the angles are conclusive. If it was hit, this fumble again raises questions about how well Allen actually grips the football. For the curious, the second fumble was the attempted lateral and we all hope Josh has learned his lesson.

How bad is Josh Allen’s fumbling problem really? In one aspect, pretty bad. As mentioned, third-most among quarterbacks in the league and if we do rates he’s the fifth-worst on a per game basis.

Let’s add a layer though. Allen was asked to run 109 times in addition to passing. That increases the amount of exposure he has to hits and events that could lead to a fumble. Allen in all likelihood should be expected to have a few extra fumbles.

Back on track, if Allen has increased exposure we should discuss his fumbles in more of a team context. The Buffalo Bills had 23 fumbles. That’s a few higher than the league average of 20.3 but within striking distance.

I think there are two problems facing Josh Allen and the Bills when it comes to quarterback fumbles. The first are miscues and gaffes like the trip and mistimed/bad snaps. I don’t think these ever go away, but they can be reduced through more practice and team chemistry.

The second is Allen himself. Yes he was hit a lot to cause a fumble but so are other players because that’s kinda how it happens. Lamar Jackson carried the ball 176 times, easily eclipsing Allen, and only put the ball on the ground nine times. I’m not sure if it’s technique, hand strength, or what but Allen does seem to have some work to do.

It’s also possible both problems are being corrected. If we divide the season in half, ten of Allen’s 14 fumbles occurred in the first eight games. Even adding the two playoff fumbles it’s still tilted toward the earlier half of the season.

One last thought. This should be an area of focus as the Bills were lucky. On average 46% of fumbles are lost so pretty much a coin flip. The Bills lost the ball 35% of the time and Allen fumbles in particular were lost 29% of the time. If the rate of lost fumbles normalizes it could be a significant issue unless the overall volume drops.