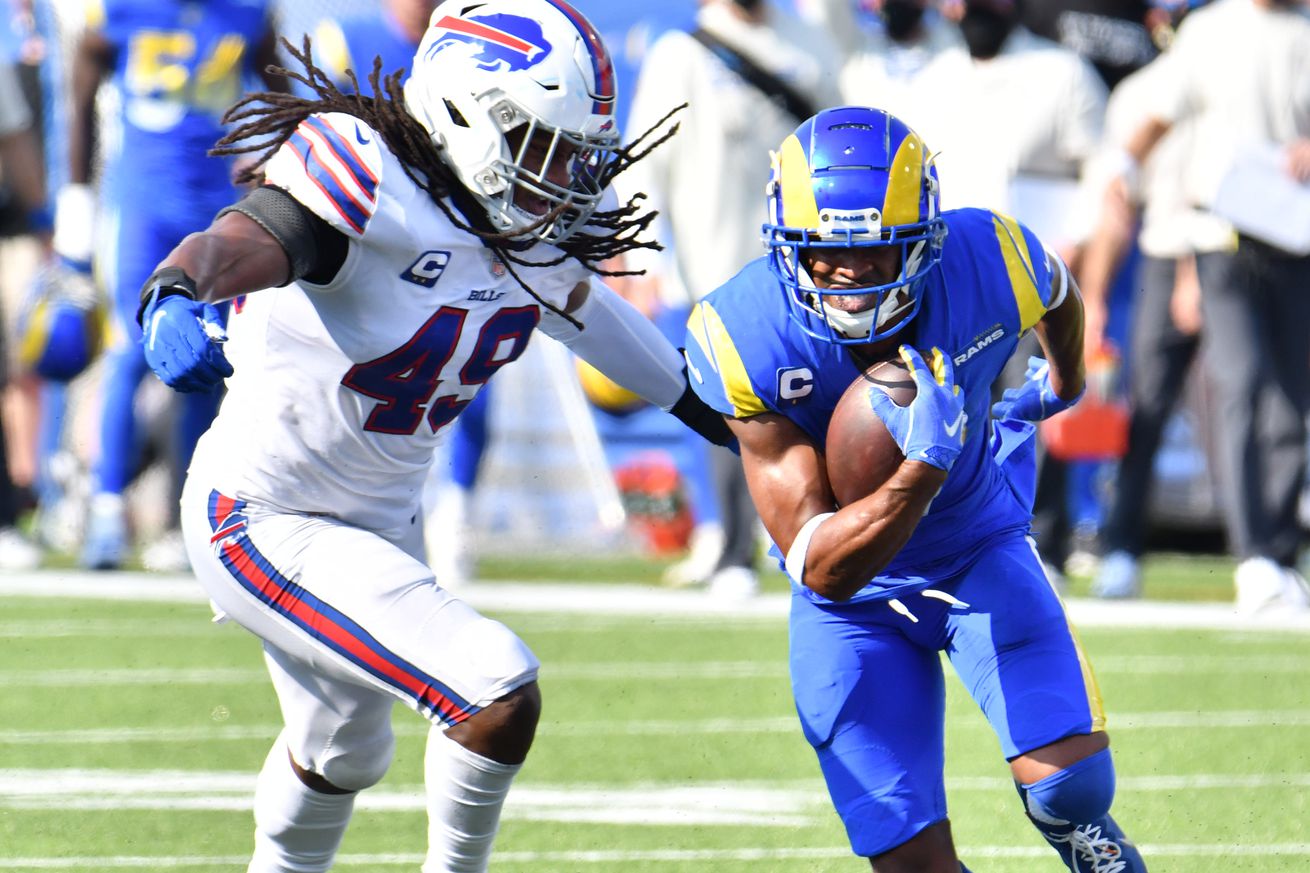 WTAF was that second half all about?

The Buffalo Bills hosted the Los Angeles Rams and it was the same old story we’ve seen a million times. An anemic defensive effort was bailed out by a dynamic offense that dictated the flow of the game. Wait—that’s not right. Seriously, what’s wrong with the defense? Let’s take a look.

This play early in the first quarter sets up a few consistent themes from the Rams. Misdirection gets a lot of the Bills’ defenders to bite the wrong way. The few on the correct side of the play are facing a pretty complex dilemma. Taron Johnson gets burned but is caught between a rock and a hard place.

One thing that needs to be stated before we go any further is that the Bills actually had some pretty good things in the works. When they were able to execute like we see here, they were able to deal with the Rams. Now let’s get back to what went wrong.

Sometimes even when things were going pretty well for the Bills they really weren’t. Quinton Jefferson got some serious pressure and the defensive line overall gave Jared Goff very little room to work with on this play. As it turns out, Goff is pretty damn good at sliding around a pocket and is willing to stand up and deliver the ball in the face of pressure. Milano’s coverage isn’t all that bad either. The throw is way ahead to avoid the pass break up and an almost circus catch finishes the play.

Another big reason the Rams had success was what we see here. The Buffalo defense was in nickel the entire game and, as we know, doesn’t have their signature run stuffer in Star Lotulelei this season. The Rams on the other hand are preeeeeetty darn good with power running and time after time got a great start because of a good early push.

It’s not just sheer force either with the Rams. Their blocking schemes and technique were on point time and again. Los Angeles knew where they wanted this run to go, they knew who they needed to neutralize, and they had a plan to do it. Most importantly, they executed.

Why a “grape” offense? They love bunches. The Rams run what looks like the same or similar play quite a bit. Hint: It’s not the same play. The opponent is left guessing what routes are actually going to be run. From there, head coach Sean McVay and his coaching staff create plays where Goff has easier decisions and easier throws with built-in blocking after the catch.

I wanted to hammer this home. Goff navigates the pocket, stands tall in the face of pressure and hits his target.

First and foremost, maybe let’s admit that the Rams are a good team and good teams find a way to make things happen. As much praise as we’ve historically heaped upon head coach Sean McDermott for his defensive schemes, Sean McVay seems to deserve similar acclaim for his offensive schemes.

If it were only that though, you’d expect there to be more back-and-forth and for most of the game the Rams’ offense seemed to have the advantage. Beyond scheme there’s match-ups and the Rams’ physical offensive line had the edge over the Bills’ fast defense. And of course recent injuries to Tremaine Edmunds and Matt Milano among others certainly didn’t help.

The question remains though if it’s just the Rams or if the Bills’ defense is in for a rough year. Personally, I think some regression was always likely. With that said, believe it or not the Bills were able to generate a fair amount of pressure and did some things well. Not every team will have the same answers that the Rams did. With a little more time, there’s a good chance that defensive coordinator/assistant head coach Leslie Frazier and Sean McDermott get the defense headed back in the right direction.