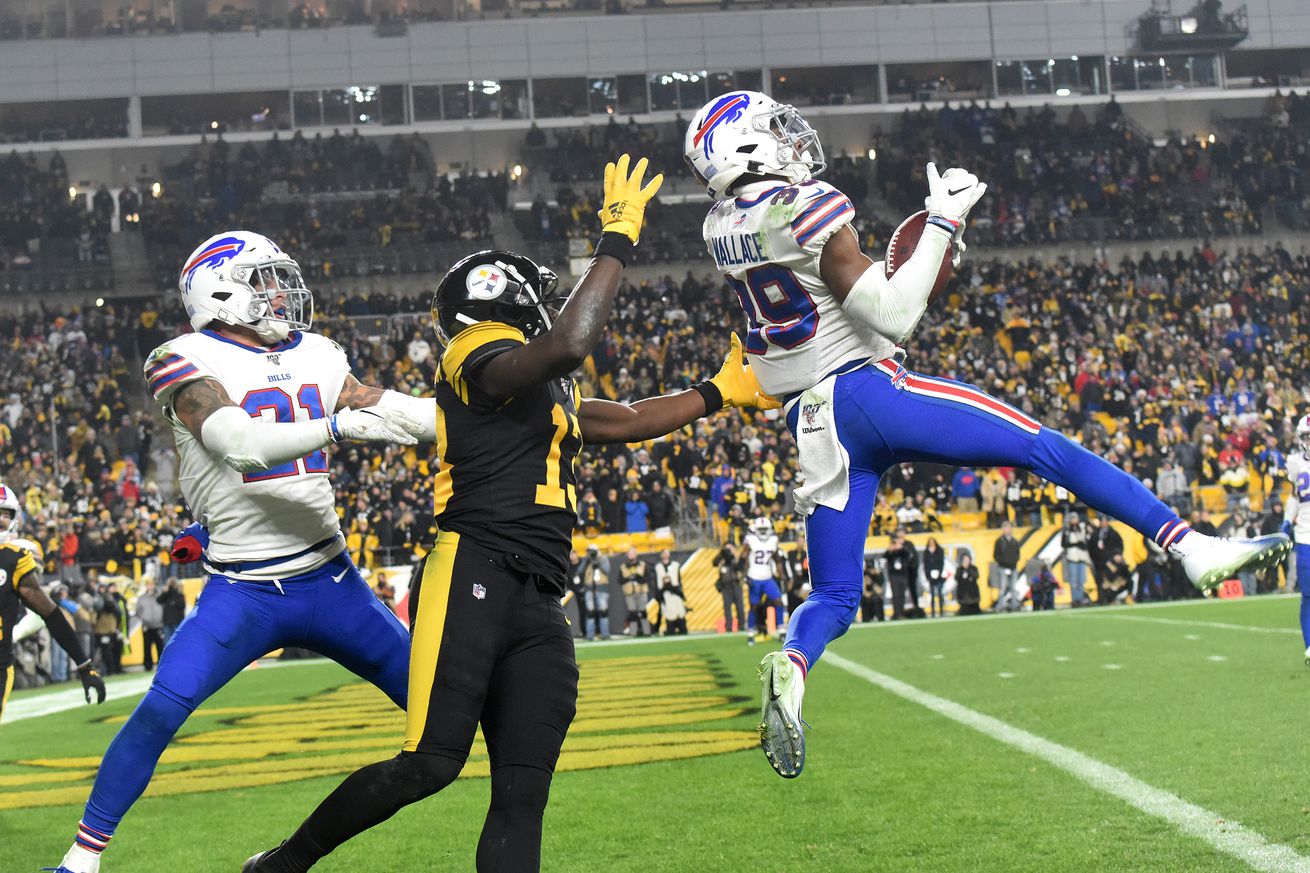 Turnovers are an exciting part of football and possibly even more importantly are correlated with winning. The Buffalo Bills have been on the right side of average every year with head coach Sean McDermott and assistant head coach/defensive coordinator Leslie Frazier running the defense. Is it luck, skills, or coaching? Let’s see if the tape holds any secrets.

For the sake of all our browsers I’ve limited this to ten GIFs out of 14 total. The ones clipped show essentially the same kinds of stories as the included ones. With that said, let’s analyze how the Bills came up with the ball 14 times.

If you read the companion piece on forced fumbles already, you may come away with the impression that the Buffalo Bills’ coaching staff emphasizes “the ball” far more than “the quarterback” and I think that helps explain this and a couple other interceptions.

Did you know that the Bills were tied for third-best in the league with 83 passes defended in the regular season? Passes defended and batting at the line all suggest a team focused on the ball. How does a defensive end come up with a diving interception? Same answer. In the still shot above where the ball is batted, look at Murphy to see where he’s looking.

I’d say this is a pretty even split between scheme/coaching and talent. Levi Wallace and Jordan Poyer are in position thanks to scheme and play call. And they’ve probably been coached on some of what happened, but they also need to be able to execute this play, which takes some talent.

At first glance you might think this is a horribly overthrown pass and to be fair I would call it overthrown—just not horribly. Watch Wallace’s route—he cuts off the receiver because he’s tracking the ball. This is Wallace’s or Poyer’s ball and that’s all there is to it.

At the pause, Tre’Davious White is breaking on the route at the same time as the receiver. If the ball is delivered perfectly he’s there for a break-up or a tackle. White’s body orientation means he sees more of the trajectory than the receiver who has to rely on timing. As will be a common statement, a lot of what occurs with White on the field is talent. The break on the route is a deciding factor here and not everyone can do that.

To reiterate a point above, the team is so focused on the ball that multiple defenders swarm it instinctively. They’ve probably done tip drills too, but Micah Hyde’s volley to Tre’Davious White is a thing of beauty.

Micah Hyde knows he can be physical at the line and manhandles his opponent. This SHOULD have been an easy touchdown for the New England Patriots but Hyde read it like a book and made a heck of a leap to get the ball. Focus on the ball. Talent.

This is very similar to Play 3 from Tre’Davious White but there’s one other element I wanted to point out. White’s hips and shoulders show he’s turned away from the route to begin with but he still gets around fast enough to make the play. Extension please.

This is a bad pass plain and simple. It’s nowhere near a receiver and there’s not enough pressure to warrant this. While I don’t know the reason for how off the mark it was, what we really care about is Tre’Davious White’s reaction anyway. If you pretend there’s no ball, it looks like White is fooled on the stop route. He just keeps running. That’s because he sees the ball as he’s stuck to his man. There’s no hesitation either. And remember I look at these frame by frame. Extension please.

Tremaine Edmunds focuses on the ball. He nearly gets the tip and as soon as he lands he hustles back to the ball and is there when it comes down.

Even when you think there’s a cushion, there’s not. Extension please.

We’ll conclude with this Levi Wallace pick to reinforce that there’s often still a lot of luck when it comes to interceptions. A bad pass or lucky bounce is involved a lot of the time. But a team that’s focused on the ball seems like they increase their odds of creating a turnover.

The Bills seem primed to take advantage of opportunities when it comes to interceptions and that’s a good thing, but we should pull back a little bit. The Bills’ 14 was tied for eighth in the league with three other teams. Five more teams had 13. League average was 12.8 interceptions.

Picks can be fluky. Would you be shocked to learn that the Bills had a stretch with no interceptions that lasted over a month? And that it DIDN’T include the bye week? That’s right. After Tre’Davious White picked off Ryan Fitzpatrick on October 20, they didn’t record another interception until Brandon Allen tossed one to White on November 24. Making things crazier, just about 30% of the Bills’ interceptions came against Pittsburgh.

I like the Bills’ odds to stay around average when it comes to interceptions because the team is primed to play the ball. That doesn’t mean they’ll ever dominate in the category though.