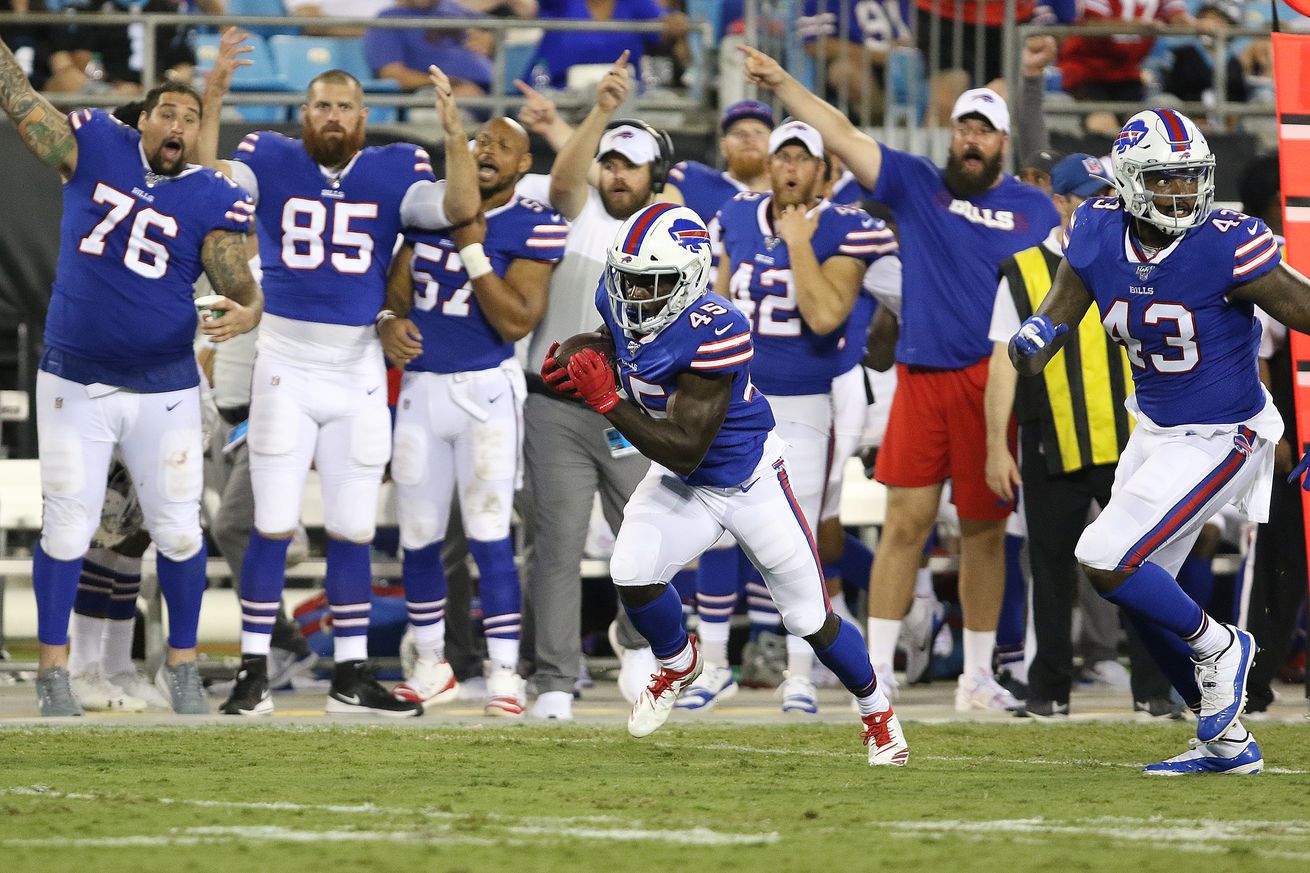 There’s one Buffalo Bills player every preseason, it seems, that fans just want to see succeed. Bills fans love an underdog, so we continuously cling to players like Brandon Reilly and Jeff Tuel when they perform well in exhibition games.

One name from last preseason that stands out is Christian Wade, the rugby-player-turned-running-back who electrified the league with his speed and backstory last August. Does the Englishman have a chance at making the 53-man roster this year?

In today’s installment of “91 players in 91 days,” we discuss just that.

Financial situation (per Spotrac): Wade inked a reserve/future deal in January to remain with Buffalo. That pact is a two-year deal worth a total of $1.401 million, of which $11,000 is guaranteed. If Wade makes the 53-man roster this year, he carries a cap hit of $615,500.

2019 Recap: Wade started his NFL career with a bang, as he took the first handoff he ever saw in a game (during Buffalo’s preseason opener against the Indianapolis Colts) and converted it into a 65-yard touchdown run. Against the Minnesota Vikings later in the preseason, he added a 48-yard reception. All together, Wade carried the ball eight times for 84 yards during the preseason, adding four receptions for 55 yards. He did not make Buffalo’s roster, and thanks to a roster exemption designed to keep IPP players on practice squads and in the league, Wade was the Bills’ eleventh practice squad member, a unit that typically has only ten players.

Positional outlook: Wade once again faces an uphill climb to make the roster, although the reason is a little different this year. Whereas the Bills had a depth chart last summer topped by two veterans in LeSean McCoy and Frank Gore, the Bills now have a depth chart topped by two young players who most everyone expects will be the guys in the offensive backfield for the foreseeable future in Devin Singletary and Zack Moss. Veterans T.J. Yeldon and Taiwan Jones bring the experience, and undrafted rookie Antonio Williams fills out the depth chart.

2020 Offseason: Wade discussed the ongoing protests in the United States with Buffalo’s official website, offering a global perspective on the issue of racial injustice.

2020 Season outlook: Wade is a feel-good story for sure, but I can’t see a scenario in which he beats out Yeldon and Jones for one of the final two spots behind Singletary and Moss. I’d love to see the Bills try to use Wade as a return man, since his lightning speed and ability to work in space translates pretty well from rugby to that phase of the NFL game. There’s no evidence that the team has even asked him to return punts or kicks, though, and unless Wade takes a huge leap in terms of his understanding of the game, I can’t see the Bills using a roster spot on him. As far as I can tell, the team still is allowed to carry 11 players on its practice squad, with Wade as an “untouchable” number 11 if they so choose. It will be interesting to see if they carry Wade with the exemption, or if the NFL relaxes the rules on practice squads in an effort to ensure that teams have a stable of players ready to roll in the event that someone contracts COVID-19 during the season. With the preseason shrinking from four games to two, it’s likely that Wade won’t see as many opportunities to shine as he did last preseason, which is a shame given how much explosion he showed in his first shot at American football. I think Wade is destined for another year on the Bills’ practice squad.